The gatekeeper shares his approach to curating some of Apple Music’s most influential playlists. 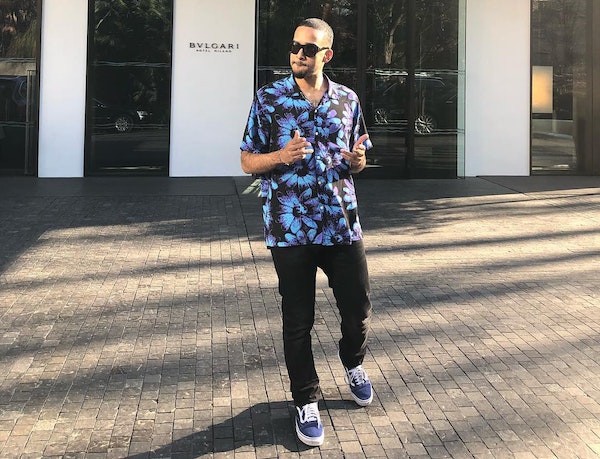 Playlist curators all over the world have quickly established themselves as some of the most important tastemakers in the music industry. A few years ago, gaining notable traction on your new single was only possible through long-term organic growth or label backing; but nowadays artists look towards Apple Music and Spotify’s individually curated playlists to help push their latest release.

Zini is the gatekeeper for Apple Music’s geographical playlists “The New LA” and “The New Bay,“ singlehandedly helping launch the careers of California’s brightest up-and-comers with his unrivaled ear for talent. He’s built a cult-like following of rap enthusiasts that’ve helped establish his playlists as some of the most influential on the web – with thousands of weekly users sifting through his picks to discover their new go-to jams.

We caught up with the California native to learn more about his job as a playlist curator and celebrity stylist. Keep reading below to learn how Zini is helping shape the California music culture.

Where are you from and how’d you get your start in the music business?

I’m originally from Hercules, California. I got my start in music by aspiring to be a photographer, and in-turn becoming a regular at concerts. I didn’t really have an end goal at the time. My first real job in the industry was with Apple Music, which is still fairly new. I’m still figuring everything out.

How long have you been making playlists for?

I’ve been curating playlists at Apple Music for eight months. Before that, I was begging Tunji to let me intern at RCA Records. We’re good friends and he always saw me with a bunch of different artists, which ultimately led me to the position at Apple under my supervisor Carl Cherry.

What makes the hip-hop scene in Los Angeles so special?

There’s so much talent here. Everyone is sounding like themselves. It’s not just the same G-Funk we’re all accustomed to.

You’re constantly in the field looking for new music, instead of just researching online. Why is it important to search outside of the Internet?

Online research and real-life interactions are both very important. I do a lot of research on the Internet, but I’ve learned that most of the hottest shit starts in the streets. They always know about it before the internet guys. 03 Greedo is the best example. I heard his song while I was out one night, and immediately ran to the booth to find out what they were spinning. The online world is so oversaturated – there’s so much music. My god. I can’t listen to everything.

What criteria does a song need to meet to make your playlist?

I kinda roll with if it’s dope or not; pass or fail. I also take into consideration the movement, the moves they’re making as an artist, the way the music is being released, and fan reaction. If people are loving it, I’m way more inclined to add it to a playlist. I’ll admit that I’m sometimes late to certain music. I’m trying my best though.

Do you have full creative control over the songs you include?

Yes, I have full control over The New LA and The New Bay playlists.

I was the very first person to playlist Lil Xan and 03 Greedo on any digital streaming platform.

Name some of your personal favorite playlists/curators.

I met KYLE at Travis Scott’s first show ever in 2013. He opened up for Pac Div. I kept seeing him out around the city and was like, “Nigga we should be homies.”

What’s your favorite thing about working with KYLE? How would you describe his style?

My favorite thing about styling KYLE is how easy of a client he is. He’s usually down for whatever I bring him. He trusts my vision. I’d describe his style as The Black Bro, haha.

Do you pick his entire outfits, or is it more of a collaborative process?

Head-to-toe styled by me, usually. For bigger jobs I collaborate with other stylists if need be.