“Mo Bamba” by Sheck Wes is undeniably one of the most important records of the year. Equipped with an overpowering energy comparable to that of an early Travis Scott, the Take A DayTrip-produced record has proven to light up festivals, clubs and the Billboard charts alike. Even if it’s not your favorite song to hear on the radio, there’s no denying that when “Mo Bamba” drops in the club or at a party, the spirit of the record becomes purely contagious.

In a rather unexpected series of events, producer Zedd decided to share his unpopular opinion about the track by tweeting the following: 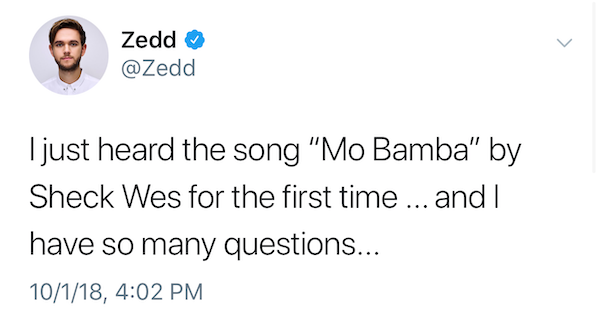 Zedd’s tweet ignited a fuse within fellow producers A-Trak and Allison Wonderland, both of whom quickly responded to Zedd’s absurd opinion. The highlight of the Twitter debate came from Take A DayTrip as the duo responded to Zedd with the complicated chord structure from their hit record, attempting to shine some light on the song’s musicality.

See some highlights from the debate below, and never diss Sheck Wes.

You can’t. Objectively, you can’t disagree, sorry. It’s the most important song of the year. Perhaps I could take you to a club and show you why I’m saying this and what’s innovative about it? I would really like that.

Haha u don’t have to apologize bro. The beautiful thing about music i:l: everyone can have their own opinions/ likes/ dislikes. I judge music by melody, chords, structure, lyrics. I’m a musician. 🙂 how a club reacts doesn’t fall into my method of judgement 🙂 to each their own<3< p>

Ya but its interesting: some art isnt subjective. Maybe you should consider looking at some songs differently. If a seemingly simple repetitive melody yields a song that gets an article in the NYtimes and rallies a generation, there is something there. (Also re: clubs, we’re DJs)