Features
Sep 19, 2017
Young Nudy’s “Nudy Land” is a doleful, melancholy examination of his past transgressions

Nudy is coming for the top spot. 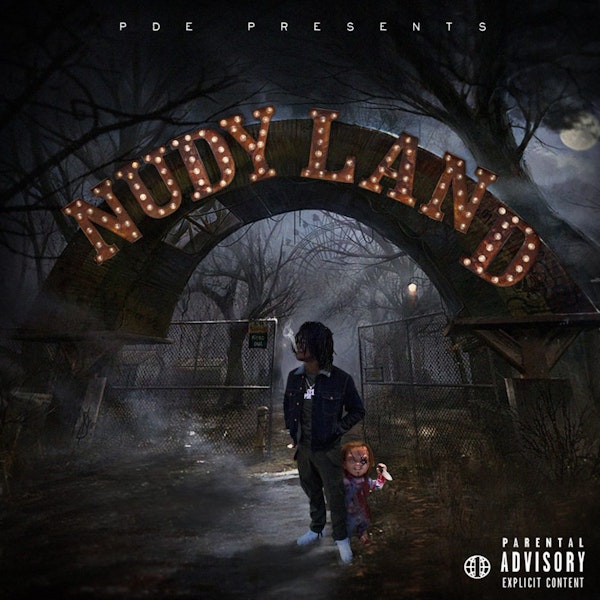 As Young Nudy stands with his face away from the camera lens in front of the decrepit “NUDY LAND” sign that is a focal point in the cover, Chuckie, the killer doll stands behind him in a sinister fashion, looking as if he’ll launch towards the viewer. The unintentional effect of the image is that Chuckie looks to be hiding behind Nudy for coverage, possibly scared of whatever’s coming his way. If you’ve ever seen any of the Child’s Play movies, you’ll know that Chuckie’s no Cabbage Patch doll – he kills, easily and fluidly. The ominous nighttime air and vibe of the cover play a central role in the project to come, one filled with creeping dread, social anxiety, and gratuitous gang violence.

Walk past the entrance gates to Nudy Land and prepare to be awestruck. Young Nudy knows how to create atmosphere. The 24-year-old rapper occupies a similar atmosphere in rap that The Weeknd inhabits adjacent to traditional R&B music – Nudy’s work is entrenched in trap mainstays but is darker and more inauspicious in nature. His signature southern drawl isn’t too far from Gucci Mane‘s, but it’s tighter and more evident. It helps that his go-to producer, Pi’erre Bourne constructs backdrops for Nudy that incorporate his creepy aesthetic in a way that compliments pounding bass central to trap rap. It goes a long way in Nudy Land sounding like a modern-day soundtrack to the climax of an 80’s horror flick. Nudy’s vocals dancing over the top, ever so lightly, add some depth that opens up exciting new avenues.

“Did what I did what I had to nigga/I done robbed a lot of niggas ’cause I had to nigga,” Nudy says as “Judge Scott Convicted” opens up. The matter-of-fact tone and straight-to-the-point way her recounts his past transgressions are part of what makes Nudy a growing fan favorite, similar to 21 Savage. He’s not glamorizing aspects of the street life he was involved in – he’s telling a story, one that he feels the need to so that he may remove the demons from his closet. He continues this trend throughout the entirety of the album, but the opener is where it’s most evident. “Hate shit turn it to a motherfuckin’ crime/God damn nigga I was motherfuckin’ cryin’,” he says later on the same track, evoking emotion that makes you visualize the scene he’s describing throughout the verse. It’s haunting, yet good storytelling.

On the slower paced “Loaded Baked Potato,” Nudy bounces his vocals off of a flute riff in the production to provide one of the most fun songs on the project. He’s all over the place lyrically, but his rhymes zero in on encounters with women and late night charades. It’s a nice switch up from some of the darker content on the project, but still indicative of the hazy nature and sound that he’s exhibited so far.

“Hell Shell” may be the best track on the project. It’s so bouncy, yet dark, that it seems like the production itself shouldn’t exist. Think about the backdrop that you hear on conspiracy videos on YouTube. Add some gut-punching bass to the backend and you have the soundtrack for Nudy to go against the grain of what you’d expect from such a gentle beat – some serious gun talk. It quickly becomes the album’s darkest offering, where on the chorus he calmly raps “Yeah, I send you to hell/Yeah yeah, send me to hell” and you become aware that he may be more unhinged than he lets on. The paradoxical nature of the track makes it one of the more interesting songs to come out this year.

Nudy’s unscattered approach at rhymes can become tiresome when taken in long doses. If I had to haphazard a guess, I’d say that he freestyle’s his lines. It’s not a knock on him – freestyling is notoriously hard and many artists refrain from doing it, especially on tracks. But Nudy’s refrain from a focus makes it hard to follow in some instances and a couple of songs end with you attempting to figure out what you just heard. Nothing’s sonically wrong with “Nutsack” – it’s fast-paced, creepy, and polished enough to warrant another listen – but Nudy jumps back and forth from gun talk to sexually charged talk involving women just about every other bar. Just as you’re recollecting what he just said about what kind of weapon he carries, he all of a sudden has his balls in a girl’s mouth. It can become exhausting.

On the features side of things, the two that are included vary in quality. There’s no question, Offset kills his. The best part? There’s no bass to hide behind – Offset just murders it. Fast forward to the last included track “No Clue” featuring Lil Yachty and you have a different story. Yachty’s verse is indicative of him not being a traditional rapper, so being placed next to a spitter like Nudy just degrades the quality of the track altogether. While I understand that a feature of that caliber could elevate the commercial playability of the project in general, the original version that didn’t have Yachty featured on it was ten times better.

Nudy Land is a project that, although it has a couple of blemishes and exposes a potential problem later on regarding lyrical direction, is unquestionable in terms of creating a unique aesthetic that doesn’t exist too much in rap in 2017. Nudy stands as one of the frontrunners for a new generation of horror core rap and how the subset evolves rests entirely in his hands.