Nudy’s menacing bars and Pi’erre’s bouncy production is the candy apple filled with razor blades your local news station warns you of every Halloween. 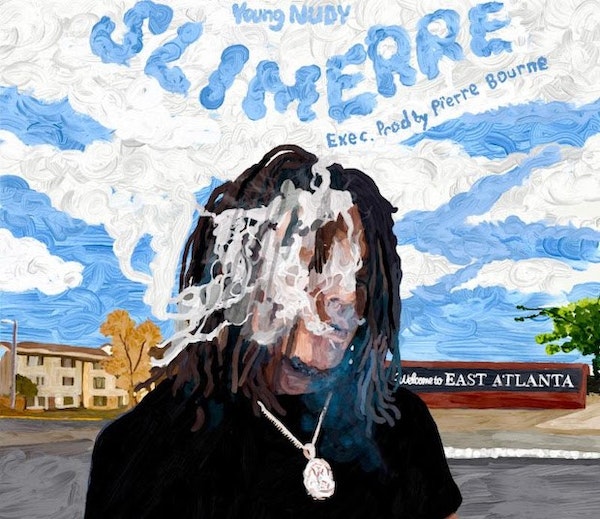 After linking up multiple times throughout the Slimeball series and on the Nudyland mixtape mega-producer Pi’erre Bourne and East Atlanta’s Young Nudy have liked up to provide us a full-length project entitled Sli’merre. The duo’s distinctly sounds mesh together to create a surprisingly delightful dish like mango salsa. Nudy’s menacing bars and Pi’erre’s bouncy production is the candy apple filled with razor blades your local news station warns you of every Halloween.

Much like his cousin 21 Savage, Nudy improves as a songwriter on every project especially when he leans into his melodic abilities. Nudy’s hooks throughout the project are top notch and he truly excels when he leans into the springing production. Though Nudy may not be a shining example of lyricism he excels in emotion and imagery. Nudy sounds like a proud dad on “Extendo,” he raps “look how that motherfucker shoot now/look how that motherfuckin’ shell hit the ground.”

Nudy and Pi’erre connected with a top-tier talent for their collaboration project selecting four of the hottest in the game right now: 21 Savage, Meg Thee Stallion, DaBaby, and Lil Uzi Vert. Each feature is a welcome highlight, 21 brings his signature blend of humor and murder raps, DaBaby drops an effortless verse stacking words like Lego blocks, Uzi sounds rejuvenated and ready to drop Eternal Atake, and Megan Thee Stallion continues her Rookie of the Year run with another sizzling verse from the Texas Hottie.

Pi’erre’s signature sugary-sweet sound is in top form across Sli’merre. Pi’erre’s production is as much JoJo’s Bizarre Adventure as it is NBA 2K. Pi’erre’s production is part anime, part video game, all tough. The array of synths and sounds found on Sli’merre is only trumped by an arcade during the Street Fighter 2 days. A few tracks find Pi’erre taking a more sparse route but when Pi’erre has his carnival of sounds in tow is when Sli’merre reaches its full potential.

Sli’merre is an enjoyable affair from the moment Long Ride begins. At a little under 40 minutes, it’s an extremely accessible project, offering up as much gloomy trap lyrics as it does vibrant production. Sli’merre exists exclusively for you to hit your meanest ‘Whoa’ whilst strapped with the glizzy. Every beat knocks and all the tracks make you want to do dirt. What more could you ask for? Sli’merre is another notch under both Nudy and Pi’erre’s belts and shows that both have yet to even reach their final forms.