“World stop-Carry on.” Remember that iconic line? If not, since 2014 feels like ages ago, it came from Beyoncé’s feature on Nicki Minaj‘s ladies anthem “Feeling Myself.” She has truly embodied that line since the song released, with the surprise drop

Remember that iconic line? If not, since 2014 feels like ages ago, it came from Beyoncé’s feature on Nicki Minaj‘s ladies anthem “Feeling Myself.” She has truly embodied that line since the song released, with the surprise drop of Lemonade in 2016 and finally joining forces with her husband JAY-Z on June 16th for yet another surprise release, the collaborative album EVERYTHING IS LOVE. It was 9 songs of bars, melodies, and the two celebrating the love they share despite the hardships.

Fans of the two speculated how this tape would sound for quite some after their classic collabs like “Crazy In Love,” “Deja Vu,” “’03 Bonnie and Clyde,” etc. Rumors continually spread over the years that it was coming, but given Hov’s exposed infidelity, Bey responding with a powerful album, and then Jay following up with an apology on 4:44, nobody knew if they were at a point they could make an album together.

They did. On the weekend of Nas releasing NASIR, his first album since 2012, Jay and Bey unleashed E.I.L on a Saturday afternoon in June exclusively on Tidal along with a video for their single “APESHIT.” The world definitely stopped, for various reasons.

Many thought The Carters were being petty as a result of Jay’s documented beef with Nas and his recent qualms with the man who produced Nas’s album, Kanye West. Others were shocked that Jay followed up with an album after 4:44 took 2017 by storm. Of course, the Beyhive was happy to see that all is well and the love was strong. It was some of their most mature content, exploring both their blackness, culture, and their success.

The thing about it is that the world quite literally carried on and the album got little to no attention after a week or so. It was the first album for Jay to not debut at #1 on Billboard since his 2002 collab with R. Kelly titled Best of Both Worlds (ironic.) It was Queen Bey’s first album ever to not debut at the top spot.

Of course, being released as a Tidal exclusive is noteworthy. The album didn’t hit all streaming services until the following Monday. June was also a cramped month for music. G.O.O.D Music had a release for every weekend, and the one weekend they took off belonged to Drake‘s double album Scorpion. E.I.L, like many albums this year, fell victim to this current era of music where it’s difficult to establish staying power when big names are releasing music every week.

There’s also the reality that people aren’t consuming collab albums upon release as much as they hype them up prior to their release. The curiosity evoked from artists promoting their collab albums typically drives much traffic to them, but many of them simply haven’t been able to last beyond a few weeks.

The Carters took a risk in not promoting ahead of time. Even though surprise releases are impactful and their combined star power could make an album with zero words go double Platinum, this one seemingly missed the mark. The Platinum label has additionally lost some significance due to the inclusion of streams when considering albums.

Is this their fault? In a way, no. One could blame the album’s “flop” nature on this era of music and the listeners. Publications listen to the album once to get their reviews before everyone else, and fans often judge an album off of the first listen. Regardless of whether or not they catch on to concepts, similes, or shade thrown at others, if the first listen doesn’t blow listeners away then many don’t revisit projects.

Additionally, there’s no way to quantify the success of music outside of streams and sales. As much as people clamor about the fact this didn’t debut at #1, it still was very successful given its limited accessibility for some time and being a shorter album.

In a way, though, it is their fault. The lack of prior promotion, throwing themselves into a busy month for music, and releasing the album while on their joint tour On The Run II didn’t give them the flexibility to record another music video or promote much after the fact. Even earning Album of the Year recognition at the BET Hip Hop Awards hasn’t helped to thrust the album back into fans’ radars.

For all we know, the album not being the talk of the year could’ve been the intention. It wasn’t about the album, but boosting the U.S leg of the tour. The timing of its release being close to when they started touring in the U.S must be considered. Superstar artists are smart businessmen and have to approach the game like a science. Who mixes up the test tubes better than Hov and Bey?

They are stars, their place in music is set in stone, and this album certainly won’t hurt their legacies in any way. One argument as to why the success or relevance of the album over time might not matter to them is that perhaps it wasn’t released for anything other than to celebrate where they are in the marriage after years of hardships.

Maybe the album, though dropped publicly, was simply a passion project for them to tell their story through music and then after 9 songs were done they just said “what the hell, why not?” This is all speculation, of course, but that would certainly be a deviation from their previous works which all had a specific intent, purpose, and gameplan.

However, they did release it. Though the fans consumed it and were excited for a brief period of time, it quickly died out. The music world is harsh, and nowadays the opinions on artists’ content often reside in the extremes of either being “fire” or “trash.” No one in their right mind would dare to call anything JAY-Z or Beyoncé does “trash,” but the overall perception of this album and lack of attention beyond its week of release make it difficult to label it as “fire” either.

What the fuck, bro? Where’d the love go? Where are the Sean Carter stans and the BeyHive? How did this album come and go? With no metric aside from sales to go off, this is an intriguing discussion to have. Why does EVERYTHING IS LOVE feel like a miss? It appears we simply have to charge it to the game. 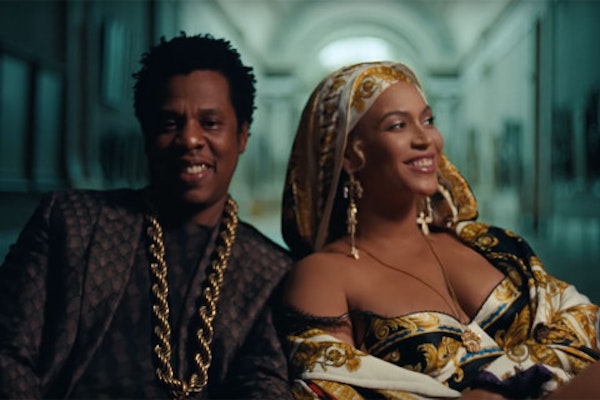