“What if RUN never met D.M.C.?” Treble.fm seeks to be the new linkedin of music.

Treble.fm, launched today via the apple app store, is a new platform that seeks to help musicians connect with other industry professional including engineers, graphic designers and more. We talked with Treble’s founder and CEO Matt Bond, about how Treble was created and what they seek to accomplish with the fledgling venture. 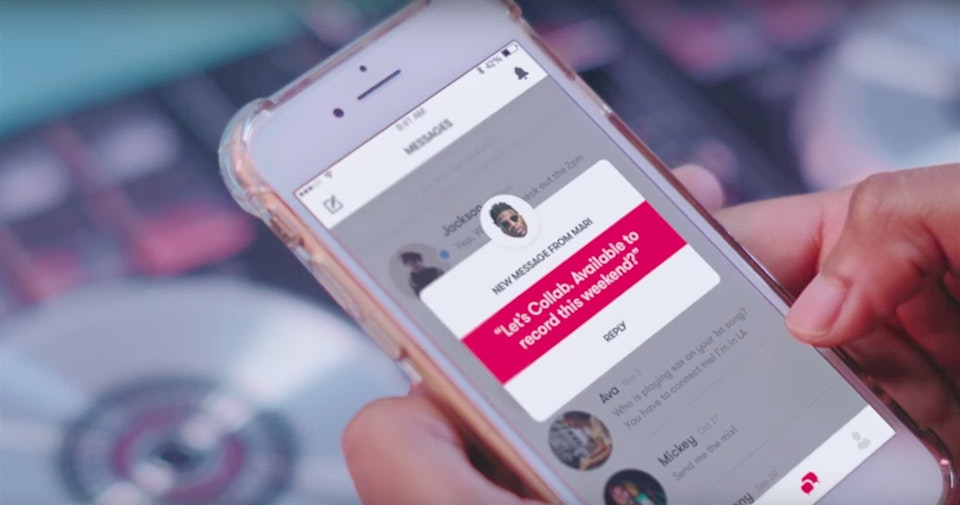 What is treble? How did you come up with the idea?

Treble is a networking platform sort of like LinkedIn but designed for artists in the music space. If you’re looking for a new producer to work with, or an engineer to mix your tracks or even a visual artist to make you an album cover, you can download the Treble app and find whoever you need to push your career forward.

What drove you to create Treble?

For years, I kept seeing artists looking for talent resources on platforms like Craigslist or Soundcloud or Facebook… platforms that weren’t designed to showcase themselves, vet talent and connect with other music professionals. So many people I know are still relying on recommendations from friends or “right place right time” encounters. So I wanted to change that.

How did you guys go about putting a plan together to build this thing?

Originally, we started Treble by throwing underground events for artists to meet and come together. We’d take over warehouses and galleries across New York City and fill them with hundreds of artists. Supa BWE, Taylor Bennett, Kamau, IshDarr, and tons of other dope artists started to come through and perform and cypher and connect with up and coming artists in the scene. Thats how we built the initial Treble community that eventually went on to become our first Treble users when we released the beta version of the app.

What was the process like, from concept to design to deployment? Did you run into any difficulties?

You’re always going to run into difficulties when you’re trying to get something off the ground. In a lot of ways, its like being an artist. There’s tons of competition and only very few people actually make it. But since we started throwing those events, we’ve always had a community of artists support behind us and that’s what has allowed us to continually push forward.  When we were initially designing the app, we’d have artists swing by our HQ every day and give us suggestions and feedback. When we couldn’t find a lead developer, one of the rappers on the platform introduced us to Ben Chrobot who became our head of product. That’s why I always say this is the first grassroots music app of our time. It’s really been the movement that has carried Treble forward since day one.

Walk us through how an artist would/could use Treble

Once you download the app, you can create a profile that features your “music resume.” This includes songs pulled from Soundcloud, images pulled from your Instagram feed, links to all your social channels, and any information you’d want to showcase to the artist community.

Within the app there are two main sections, The Bulletin and The Artist Discovery mode. The Bulletin is where artists can post and find opportunities among the community… sort of like the musicians section of Craigslist but way more efficient and way less sketchy. Any artist resources that you need–from session work, to mixing and mastering to photography for your social channels–you can find it on this screen. The Artist Discovery mode is sort of like a mix between LinkedIn and SoundCloud. So for example, if I wanted to find a female singer within 15 miles, you can set your filters, browse through female vocalists in your proximity, stream their music, and then connect and chat with the ones you want to work with. 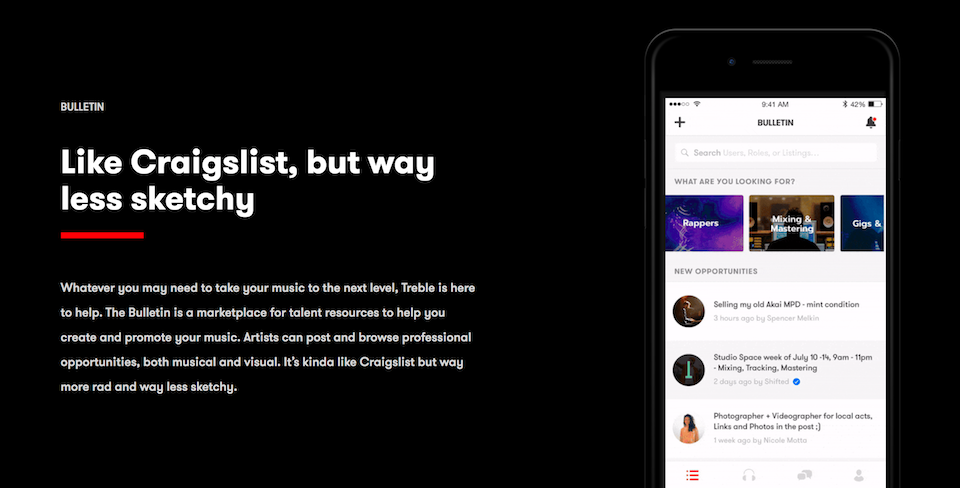 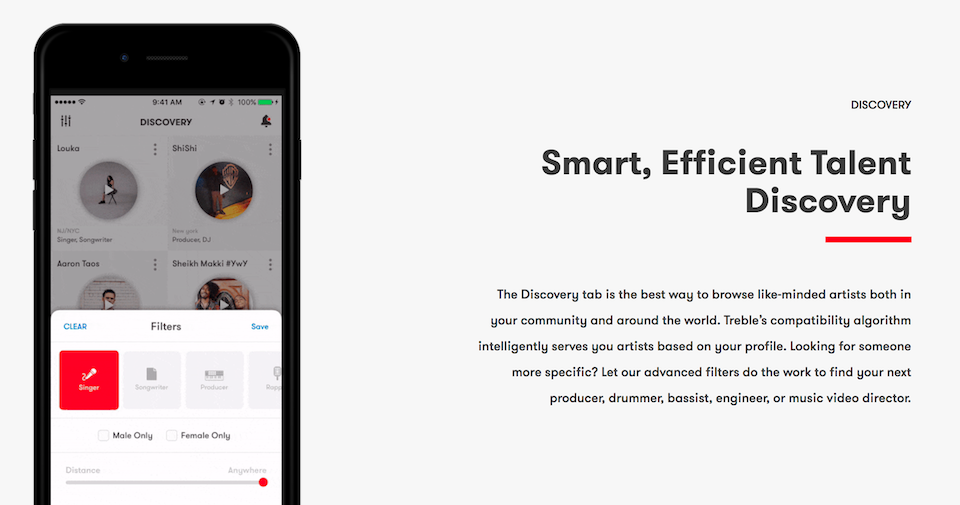 Can any artist join or do you need to be invited?

As of this week, the app is now open to any and all artists.

Do you guys have a revenue model? How do you guys plan to sustain the business?

There are several proven models for monetizing professional networks across different industries. Some of which include charging for promoted posts, premium features for power users, and paid services for talent recruiters. We think there are big opportunities for us to implement similar models within Treble once we hit critical mass. But right now our focus is on growing the community. In the short term we are actually making money on Treble Live events. This gives us enough cash to pay our employees while we grow.

What’s been your favorite event so far?

Definitely our SXSW House Party. We drove out from NY to Austin and transformed a local warehouse into a massive country club for artists. We built a studio and a stage and threw a huge rager with 1000 people. Over 20 artists performed throughout the week and so many of my favorite acts in the scene came by throughout the week to just kick it and hang with each other. Shoutout to our friends at Babes Only and Ear2ground and every artist who drove in from NY to make it happen.


What are some of your other favorite music apps out there right now that you think are invaluable to artists or that you see a lot of potential in?

Nothing. Everything else sucks. Haha nah just playing. Hm… I really like the guys over at OffTop. If anyone uses voice memos to records stuff or just wants to hop on some dope beats check them out.

How many users did you guys get in the beta? How much money have you raised so far?

We accepted around 2,000 artists on the platform so far. We’ve raised just enough to stay lean. In a lot of ways, raising money is like signing with a label… it’s always best to wait until you have traction if you can.

What are your guys plans after launch?

We’ve got some pretty badass features for artists and industry professionals that we’re excited to start building. We’re also working on a web version of Treble that we want to release within the next year. And of course, we’re gonna be bringing Treble Live to new markets across the US. But in the meantime, we also plan to post up at Treble HQ and bump all the dope music that gets created through Treble. If you make something cool, send it to success@treble.fm and we’ll see if we can get it some coverage and share it with our community.

Download the Treble app today and check out some content below from some artists that have already connected through the app.