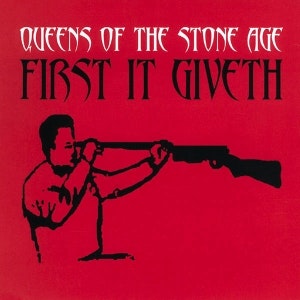 This song just came on shuffle as I was doing some work and I forgot how good this whole album was. Queens Of The Stone Age’s Songs For The Deaf is an iconic album, front-to-back classics. Go back and relisten, that’s what I’m doing tonight. Peep the video for their 2003 single “First It Giveth” below. Lead singer Josh Homme had this to say about the song’s inspiration (the intertwining of drugs and music creation),

“Well I think we have a song that about this subject called First they Giveth, then They Taketh away, and I think at first you can draw inspiration and then eventually, it negates any inspiration. ‘The Lord Gave, and the Lord Hath Taken Away’ is a bible quotation found in the book of Job. It has become altered to a popular idiom generally used out of Job’s context, “The Lord giveth, and the Lord taketh away”. This in turn became, “First it giveth, then it taketh away.”