Travis Scott is wreckless with this one. 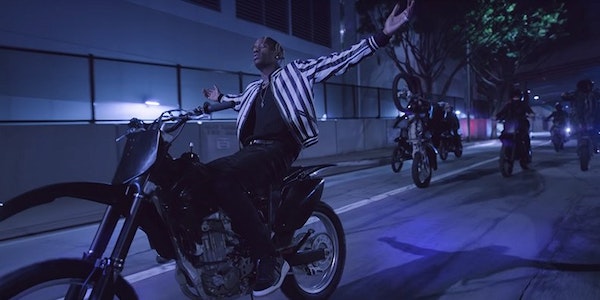 Travis Scott has been untouchable in his zone this week. Celebrating his daughter Stormi Webster’s first birthday on February 1st, performing the illustrious “SICKO MODE” during the 2019 Super Bowl LIII halftime show, and even appearing in James Blake’s official music video for “Mile High” which released yesterday, Travis relentlessly communicates that no matter how many projects he has currently in the works, he still makes time to fully dedicate himself to all areas of his life—whether that be in his home life or work environments.

Just a few hours ago, Travis Scott continues his hot streak, revisiting the landscape of ASTROWORLD with the release of the official music video for “CAN’T SAY”. Directed by Nathalie Canguilhem, you can find Scott and his crew decked out in all Saint Laurent, creating a vibrant & fashionable essence within the dark and gloomy underlying context that Travis is known to deliver visually. Racing dirt bikes throughout the city in the deep of night, viewers are met with daredevil stunting, insane edits that show fire burning a pyramid, and a stable of horses running throughout the underground tunnels of the city. This video is definitely one that anticipates the delivery of a short film next from the Houston raised rapper.