You don’t wanna miss these jams… 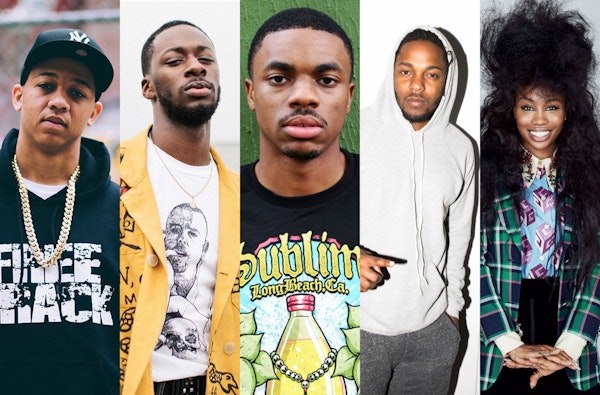 We’re half way through 2017 and there have already been a plethora of bomb musical collaborations. Now, when it comes to the art collaborating things can go south very fast if the musicians that are working together aren’t in sync. However, when done correctly, musical collaborations can be a euphoric musical experience for listeners. Imma get right to it for y’all, below are the top 5 collaborations of 2017 thus far.

Okay so you know how Drake said ” Girls love Beyonce”? Well baby all black girls love SZA so there is no way I could create a list of the top 5 collabs of 2017  for all you loyal readers and not include the mystical musical goddess herself. “Love Galore” is honestly and truly one for the books. SZA’s soulfully eccentric voice mixed with Travis Scott’s mumbled tone blend so well together.

DAMN is by far one of the best albums of 2017, so it should come as no surprise to see Kendrick’s name pop up on this list. “Love”, the 10th track on album, is a great example of a perfectly balanced song. The beat is upbeat enough to keep you in tune with the track but not so fast that it contradicts with the slowed down pace of  Kendrick and Zacari’s vocals. Kendrick’s poetic rap vibe blends perfectly with Zacari’s angelic voice.

This track is off of Goldlink’s debut studio album, At What Cost. “Crew” is one of those songs that catches your attention once you hear the beat. Brent’s voice is the epitome of 90’s R&B and it really does it to me. His smooth as butta voice makes the hook my favorite part of the song. Up next you have Goldlink himself, spitting bars that are damn dear soulful. Last up is Shy Glizzy who was able to make his swaggy and somewhat grimy voice blend ohh so well with the other two artist.

I don’t use the word psychedelic often but there is really no other word I can think of to describe the Gorillaz. “Ascension” is a song off of their newly released album, Humanz. The Gorillaz’s trippy electronic like vibe and Vince Staples hip-hop vibe go well together.

If you don’t have one hood love song on your playlist what are you doing?? Tink and Bibby are definitely an unlikely duo but they DID THAT on this record. Tink’s soft and sexy vocals collide perfectly with Bibby’s hard and gritty voice.