The Internet Made Ian Connor, Now It Needs To Make Him Disappear

By now, you’ve probably heard of one or more of the heinous rape crimes that Ian Connor has allegedly committed. I only say allegedly because everyone is due their day in court and technically are innocent until proven guilty, but’s let’s cut the shit—there’s

By now, you’ve probably heard of one or more of the heinous rape crimes that Ian Connor has allegedly committed. I only say allegedly because everyone is due their day in court and technically are innocent until proven guilty, but’s let’s cut the shit—there’s a more than likely chance that Ian raped each of the girls that stepped forward, probably more.

If you don’t know about Ian Connor, look no further than what you’re using to read this right now. The Internet, in all it’s glory and destruction, is what made Ian Connor who he is. That’s not to discredit the moves he’s made in the fashion world since gaining the platform he’s on, but it’s no secret that Ian Connor’s entire popularity and status was originally birthed from the internet.

Having started with humble beginnings on Tumblr to his meteoric rise to fame through Twitter, Instagram and other social media outlets, Ian has masterfully used the internet to spawn a cult following of youngsters who nearly worship his every move.

From being associated with the A$AP Mob to working with Kanye West, Virgil Abloh, and less-famously Kylie Jenner, Connor’s influence in the fashion world is undeniable—as is his influence over thousands of teens nationwide, probably worldwide.

You can simply search Ian’s name on Twitter and find bushels of teens sucking he and his every move, post, and picture bone dry, when the reality is more than 90% of those kids (if not more) have never actually laid eyes on him in real life, met him, or even had a conversation with him. He is a definitive false idol in the world, and these cases of rape push him way over the definitely-a-piece-of-shit line in my opinion.

Sure, it’s not like I know Ian Connor personally—but I have friends that do. I have friends, female friends, who unfortunately know Ian Connor all too well, as they’ve been sexually assaulted by Ian. But I’m not writing this to air out anyone’s business, I’m writing this to hopefully spread awareness of a greater message–wrong is wrong, and a crime is a crime, no matter who commits it. It doesn’t matter if it was Brock Turner, the Stanford swimmer who raped an unconscious girl behind a dumpster, or if it was Ian Connor, the self-proclaimed “king of the youth.”

In looking at the two main public stories, those belonging to Chicago natives Malika Anderson and Jean Deaux, it’s the same M.O. both times. Force and belittlement. I’m no psychiatrist, but I feel like Ian’s mental degradation and tearing down of women in order to take advantage of them probably stems from his own insecurities and frustrations with himself—though that CERTAINLY does not excuse someone from rape.

If you haven’t been following Ian on Twitter or Instagram you haven’t been missing much, but you have missed out on many tweets of his that are pure headscratchers. Not in an “I don’t know what you mean” way, more in an “do you actually think that way and if you do what the fuck?!” way. 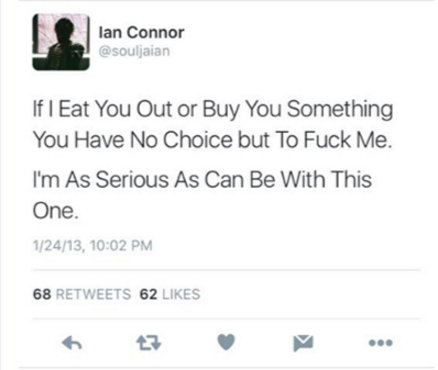 This man Ian Connor is starting to become one big, sad “LOL” and one annoying ass headline. What might’ve really put the nail in his coffin, whether it be his career or his popularity amongst the masses, was a tussle he had with mentors and longtime friends Theophilus London and A$AP Bari at a VLONE event just recently.

In various video clips below, you’ll see Theo verbally teeing off on Ian, who throws a punch (if you wanna call it that) at London, whiffing terribly. This all then leads to Ian getting escorted outside, with A$AP Bari running up on him like a crazed silverback gorilla, knocking him clean upside the head.

If not for some people in the way, I’m sure Bari would’ve done much more damage. Though Ian’s done plenty other damage since, even going so far as to say “fuck Rocky” and “fuck Kanye” in a DM that was then screenshotted and went viral on the Twitterspheres.

Fuck me , fuck @TOASTOTHEGOD , fuck rocky? Fuck @kanyewest? All the niggas that got u here? ??? u on ya vlone? ??? pic.twitter.com/v4n3AirTVO

Every time I see u I'm gonna fuck you up, Evrytime u dirty fucking rapist @souljaian #Eveytime

All punches and broken friendships aside, let’s get back to the real topic here. The Internet has done wonders for Ian Connor, taking him from lowly Tumblr guy to one of fashion and hip-hop’s most well-known faces, but now it’s up to the world wide web to get Ian Connor the entire fuck out of here.

I mean, teens idolize this guy still, defending him at every turn, and that shit is just sad. They’re being desensitized to the oppression of women in pop culture, which is sadly reflective of a much bigger picture in our society.

We need to love, respect and care for the amazing women of our world, not degrade them and take advantage of their minds and bodies, for sexual purposes or otherwise. I implore everyone reading this to please stop bringing attention to his name. Don’t bring him up, don’t acknowledge him, don’t make him relevant in any way, unless it’s to bring attention to what he’s done.

I understand that this one article won’t make his massive fanbase come undone, and I fully expect some hate from his minions, but I hope it at least brings awareness to an incredibly awful issue in today’s world, something I pray about and work towards aiding every day.

By supporting Ian Connor, it’s like glorifying what he’s done. He claims he “mentally took advantage of bitches,” which is a weak ass cop out if you ask me. But even if that was the case, it’s not much better than what more than likely actually happened, on numerous occasions.

This isn’t like the Bill Cosby case—Ian wasn’t a childhood hero and surrogate father to many who are having trouble letting go of that image of him in their head; this guy is a self-proclaimed scumbag with a young and impressionable following at his command. He’s had no shame in hiding his true colors on social media in varying degrees, and now it’s catching up to him in the real world.

It’s time to forget Ian Connor ever existed, and to work towards putting positive, empowering influencers on pedestals, instead of following people who are so clearly lost themselves.

It’s up to us as a whole to take the facade of too-cool-to-be-guilty Ian Connor down, as well as any other “man” who preys on women. Do right by the women of our world and take a stand against who (or what) is popular when they’re wrong, even if you’re standing alone.