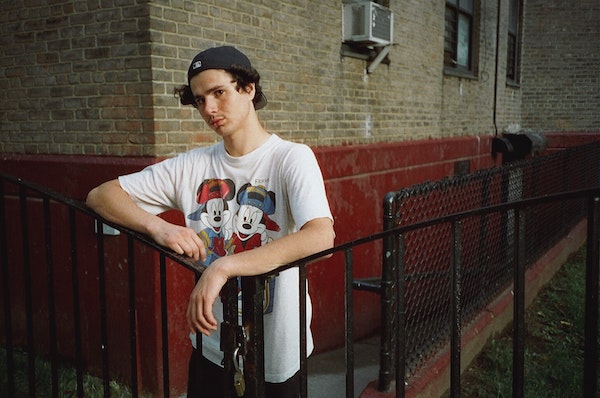 Tedy Andreas made a massive impact with his recently released mixtape ‘IN2DEEP,’ using nine-tracks to prove that raw lyrical hip-hop is alive and well. Despite his origins in Houston, the 22-year-old carries an East Coast-influenced style that’ll remind you of New York’s most legendary emcees.

We caught up with the rising flame-spitter to learn more about his new project, growing up in Texas and more. Read our full conversation below.

Your mixtape ‘IN2DEEP’ grapples with a lot of emotion. Where do these inspirations come from?

It was a tough & frustrating time for me during the making of the tape. I basically made this whole thing in a New York City basement where I was living. I just had a lot going on in life, and I wanted to let loose through the music.

I was basement living on some grimy shit. It was a summer project, but the summer wasn’t lit like I thought it would be. I wanted to drop this things months & months before, so as I said I was frustrated with myself. While I’m falling out with my girl, Mom’s calling me talking bout she hate her job & money problems every other day really gets to me. That’s where the frustration was coming from. I feel like how I was feeling reflected sonically on most of the joints. Shit wasn’t sweet. A lot of pent up aggression was shown in the records.

Describe life growing up in Houston

I was a wild kid yo; shit was fun I guess. Skateboarding heavy, smoking ‘n shit. Always in the city.

When you hear the term ‘Houston rap,’ what do you think of?

I think of cats like Geto Boys, UGK, Flip, Mike Jones and all the OG’s. Growing up, Z-Ro was my favorite Houston emcee. I got heavy into the screw tapes later on. I liked pretty much everything else I heard, but personally it wasn’t my thing. Houston rap culture is super dope, though. I wish it was still like it was in the 90’s & early 2000’s.

Did you compete/work with locals or has it always been more of a solo endeavor?

It’s always been solo, but not on some fuck everyone type shit. I been writing raps for mad years and when I was growing up, it wasn’t as popular to do as it is now. Cats would laugh & shit when I said I wanted to be a rapper so I stayed lowkey about it. Everyone would spit at lunch tables at school ‘n shit, but not many people were recording yet

I had a homie who would go half with me on studio time and we started recording at this lil studio in Alief once or twice a month when I was 16. I showed some friends my shit one day, and they were like “…Dawg you gotta do this; you’re nice.”

After that, I started really dropping shit. I think I still have a problem with collaboration simply because I’m so used to doing things on my own. My brain doesn’t think to network but I’m trying to get better at that.

Do you think the stereotypes associated with Houston rap have made it harder or easier for you to gain buzz?

Neither. I think we’re in an era where the geography you’re from doesn’t put you in a box as much. It’s kind of sad to me. I miss when rap had more different regional cultures & sounds.

You come equipped with an old-school esque flow on nearly every track, placing a ton of emphasis on lyrics. How did you develop this sound, who were some of your biggest inspirations?

The first rap album I listened to was ‘Get Rich or Die Trying’ by 50 Cent. I was 9 or 10 years old, and I knew I wanted to be a rapper. Then, Tony Hawk’s Underground came out and I first heard ‘The World is Yours’ by Nas. That shit changed my life. I loved that song yo. I remember going to a pawn shop with my Mom and I saw ‘Stillmatic’ for like $4 and I thought that song would be on it.

My Mom bought it for me and I would listen to it for like a year straight. The east coast style rap was my shit. I loved the music and the lyricism. I always loved bars so I’ve been rapping like this since I first started. In middle school I was on Mobb Deep & Biggie shit. I think I was just influenced at the right age to want to spit like them.