I’ve had it up to here with Russell Wilson, this is war 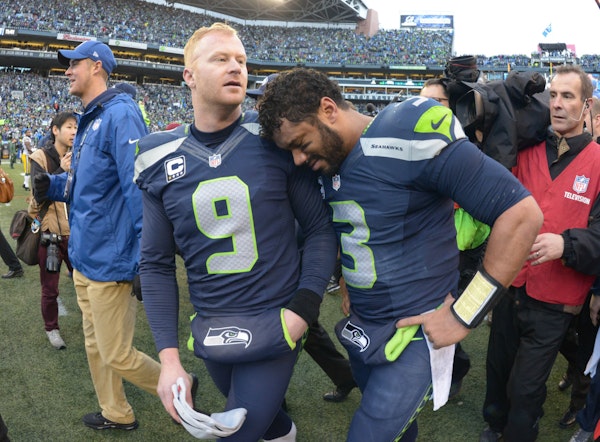 Ok, enough of this fucking guy. I already told you about the war that’s brewing between our hero Future and the non-villainous-seeming villain Russell Wilson. Now, Future’s kid isn’t the only person who has to deal with this wet blanket Wilson’s shenanigans, as the whole Seattle Seahawks football team is now being forced to take sides. In an interview with the team’s official DJ DV One, he stated,

“This year, I’ve been getting a lot of requests for Future. But that dynamic is weird too, because I can barely play Future with Ciara running around and that’s her baby’s dad. It’s just that he has a dope-ass album out right now, players like to hear it, it definitely gets you pumped up — even though it’s low-tempo, it’s still stuff that you want to hear — and then you’ve got Ciara running up with little baby Future and she’s dating Russell so it’s like, “Oh f—.”

So, as you can probably imagine, the Seahawks began the season 0-1 with a heart-wrenching loss to the St. Louis Rams. Wonder if things would’ve played out differently had the Seahawks been playing football in AMERICA, WHERE WE CAN LISTEN TO ANYTHING WE GODDAMN WANT, INCLUDING THE HOTTEST ALBUM OF ALL TIME DIRTY SPRITE 2. Oh, Seattle is in America? We’re just banning the pump-up music this team so desperately needs because their bitchass Quarterback (with all due respect) doesn’t want Ciara to hear it by accident and realize she’s stupid for leaving THA GOD? I don’t know which is a worse call, the Seahawks‘ decision to pass it on the 1-yard line in the Super Bowl or their compliance with this ridiculous ban on Future’s music. Pete Carroll needs to step in here pronto or the Hawks might not win a game all year. For the love of all that is dirty, FREE FUTURE!