Her 10-track project dropped this past week. 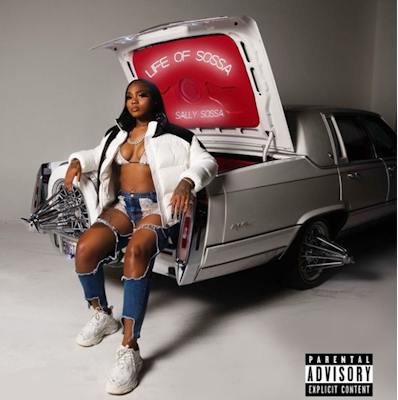 Sally Sossa has defied the odds in more ways than one. The Houston rapper showcases the high and lows of her thrilling journey on her new project, Life of Sossa. Odes to the code wrap telling tracks like “100 Flows” and the rambunctious “GMFU,” into a sobering offering for those peaking into the streets and those looking for a way out.

Sossa is an open book on the LP’s intro, leaving no crumbs on the beat by BMB Third. “Chosen” leaves Sossa a lone soldier in the battle for domination while protecting the ones close to her heart. Unapologetic about her stature, Sossa gets vulnerable on the touching “It Ain’t Love” and fan favorite, “A Letter To The Streets.” Teaming up with sole collaborator and drill veteran Lil Durk, the two take a bold and heartfelt pivot into thug passion on “Star Song.” Singing about a remarkable love, Sossa and Durk give fans a surprise well worth the wait.

Read the breakdown below.

"100 Flows" is like my flex song. It’s talking about everything from my music to my lifestyle and means everything to me because I made it in one day

Creating this song was my own personal therapy session. I wrote this song when I was coping with losing my loved ones. The meaning behind it is love your people while they’re here because you never know when they won’t be anymore.

When I created this song I was honestly on demon time in school lol. I really wanted to fight this girl for texting my boyfriend at the time but the school principal told me if I did fight I couldn’t perform at prom. So instead, I wrote a song about it. I felt like everyone “Got me fucked up” so I named it that.

Need me is important to me because I’ve learned so much about life and love. I’ve had my good experiences and bad but I still continue to love. “I love you but I don’t need you” was my mood for the song. I’ve seen people be loyal and I’ve seen people cheat. I’ve seen ungrateful and grateful characters in people. It hits home when you’ve had similar experiences but now you’re living a better life from a rough past.

My inspiration for this particular record were my true feelings at the time. I had to stop caring about everything else and just focus on myself.

Working with Durk on this was amazing! He’s so incredibly talented and intelligent and has taught me a lot. We were in the car and I was playing different songs and afterward he kept telling me to play that “star song” again and from there we made history. I knew this song was “it” because of its catchy melodic vibe.

When I made this song I was originally in the studio with Gooney Tunes creating new beats. He played some beats he had and when I heard this one, all I could say was “this is the one!” I started freestyling, then writing and recorded it the next day. Over time I revamped it and added it on to the project.

"A Letter To The Streets"

This song is important to me because it’s my pain song. I was going through a really dark time. All I felt was pain and I had to let it go, so I put it all in a song to get through my depression.

The first words that start this song are significant, “it’s okay not to know who you are.” Meaning, everyone finds themselves on this journey and even if you haven’t yet, keep going, this is just the beginning. You have to keep working to be the best version of yourself for yourself and it’ll come to you or you’ll find it. Either way, what’s meant for you is only for you. Everyone has a different path so follow your dreams because anything is possible.