“How much xans and lean do you have to do before you realize you’re a fucking loser?” 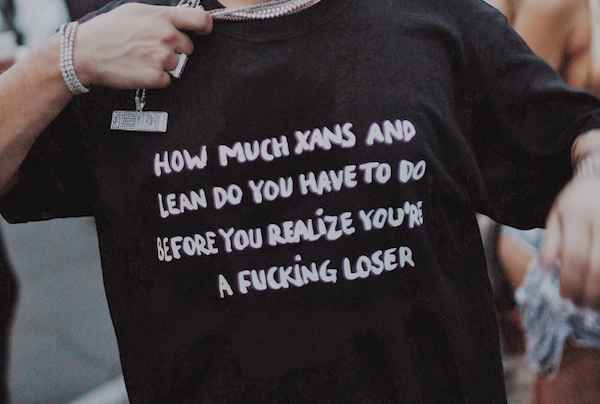 The cover of ‘There’s Really A Wolf’ may be a crudely drawn picture, but it’s a self-portrait of Russ himself. The sum of his experiences – from recording and releasing songs every day on SoundCloud to being denied coverage by a number of his favorite music blogs – has made hardened him, causing him to mature at a faster rate than normal.

The level of success that he’s always envisioned has arrived and he’s doing everything in his power to keep up with it. The byproduct of his rate of success and the hardships that he’s endured have made him become one of the most outspoken rappers in the industry. He says what he wants when he wants. He’s the alpha dog who keeps it real, no matter who may get offended. When he say’s that there really is a wolf, he’s talking about himself.

Someone snapped a picture of him at the Day N Night Festival between performances that he liked and decided to upload it to Twitter. It was a random off guard moment featuring Russ smiling as he looked off camera. His shirt held a message that many deemed offensive enough to angrily chastise him on Twitter.

Russ captioned the picture with “After show. Message.” Soon after the upload, the picture went viral. Rappers started to come for his head immediately.

Until I can stop thinking bout my dead homies an the trauma that I been thru in my life that’s when I’ll stop ? https://t.co/DEPi82FvNL

Who dress more like Big Sean him or Big Sean https://t.co/zrRJrZc94S

I drink a pint a week & im cool as fuck https://t.co/FFORHRvZxM

Other people also took offense to what they perceived as an attack on coping drugs altogether.

Niggas really dealing with addiction and mental health issues tho how does this help?

there are too many conscious decisions that go into feeding an addiction for it to only be there fault on the surface.

Other people have made light of the situation. Adam22’s No Jumper podcast made its own version of the shirt for comedic purposes.

The general consensus from the hip-hop community is that Russ is on the verge of “being canceled.” With words like “industry plant” being thrown around because he doesn’t approve of these modern day rap mainstays is startling, and somewhat depressing.

Drugs have always been something that we’re taught from a young age to stay away from. In the rap community, usage often comes from a painful place – usually existing as a coping mechanism for traumatic events. But this usage often intertwines with that of a purely recreational nature. What exists in modern rap is a combination of both that’s pushed by rappers as a means of identifying with a younger fan base who will begin to use drugs for this purpose.

What Russ did was wear a shirt that doesn’t insult coping drugs, but furthers the conversation. In the way that the shirt implied, using the drugs for recreational purposes makes someone a loser. If you’re coping, that’s an entirely different situation.

Doing xanax and lean cuz your favorite rapper makes it sound cool is all fun and games till your impressionable ass gets addicted. Stop.

If I stopped ONE kid from abusing xans or lean, mission accomplished..better than getting ONE kid to try that shit. Period.

If I gotta be the bad guy for saying what mad people think but are 2 scared 2 say then so be it. At least I’m promoting living & not dying.

A lotta rappers have romanticized & glorified drug abuse. That shits not cool. Peoples lives get ruined from that shit. Grow up.

With that being said, how can people still find a way to go against what he stands for? He’s what hip-hop needs at a time period where the agenda is being pushed in the direction that the shirt pushes against. Now that the conversation has been started, will things change? Will artists unite with him against the cause?

In all actuality, maybe he was given the shirt. Or, he wanted to wear it to be funny, not knowing the reaction it would cause, and now has to stick by it. In any event, a shirt is a shirt. Also, everyone is entitled to an opinion. Writing someone off for sharing a positive message is wrong. It becomes even scarier when it’s in an industry and genre that defines popular culture for the entire world.

Now that the wolf has howled into the night time sky, it’s time to follow up with our own howls of agreement as the supporting pack.