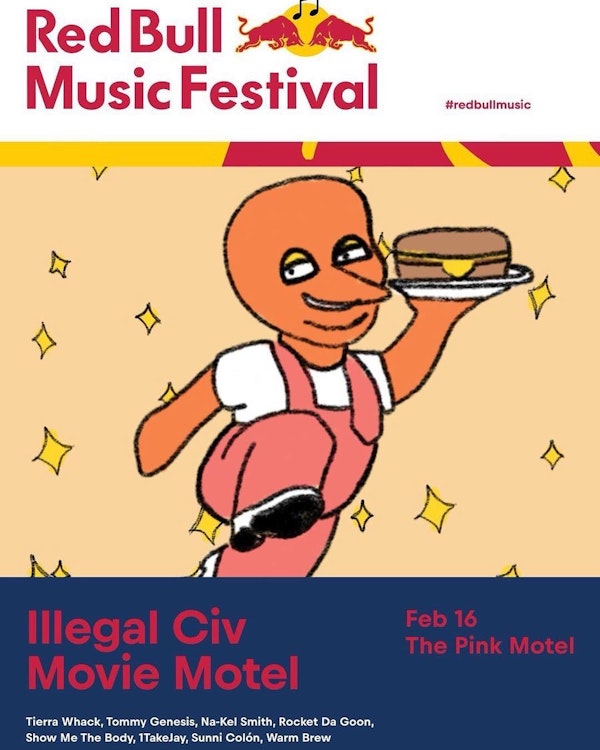 On Saturday, Feb 16th – our good friends at Red Bull Music will be hosting the Illegal Civ Movie Motel in Los Angeles, CA. With a standout track record of throwing off the wall events, Elevator is extremely excited to be in attendance.

Armed with a video camera and a few vodka & Red Bulls, we are extremely excited to watch some of 2019’s most promising artists take the stage at The Pink Motel. Learn more about Illegal Civilization as well as some of the acts we are excited to see this weekend below. View the full line up and purchase tickets online here.

Founded by North Hollywood native Mikey Alfred, Illegal Civilization is an eclectic crew based in LA. Through producing, directing, designing, curating, skating, and much more, they’ve made an impact across the arts.

From the collective’s members involvement their most recent Illegal Civ Cinema Tour, working with Jonah Hill on his directorial debut, Mid ’90s, to the photo shoot they did with Tyler the Creator and Kendall Jenner for Vogue, the LA-based collective has been making a massive mark on the culture. With involvement in film, skating, fashion, and more, Illegal Civilization is Los Angeles’ next big thing who we know will become a household name in no time.

Emerging as rapid-fire freestyler Dizzle Dizz back in 2011, she has since found her voice as the artist Tierra Whack and started making the most creative, unique music of her career.

At only 15 minutes long, the 22-year old’s debut project received a tremendous amount of support from fans and critics alike. With so many artists getting lost in the never-ending quest for virality, Whack is taking over the game with her ingenuity and artistic talent. As the young artist is finding massive success following the release of Whack World, including a Grammy nomination, she is without a doubt one of the most exciting artists to watch rise in 2019.

Watch the video for her debut audio-visual album Whack World below.

Making a name for himself in the exploding new wave of Los Angeles rap, 1takeJay has quickly become an unstoppable voice of Southern California’s newfound hip-hop revival.

Witnessing the explosive rise of Jay following his breakout single Arco, has kept us rooting for LA’s new home town hero as he’s successfully turned hundreds of thousands of SoundCloud plays into sold out shows in no time. With co-signs from practically everyone on the West Coast, the charismatic rapper has kept his foot on the gas and his fan base has absolutely exploded in only a matter of months.

Watch 1takeJay’s debut Elevator video for “Bleed Em” featuring AZ Chike off his break out Wait Hol Up mixtape below.