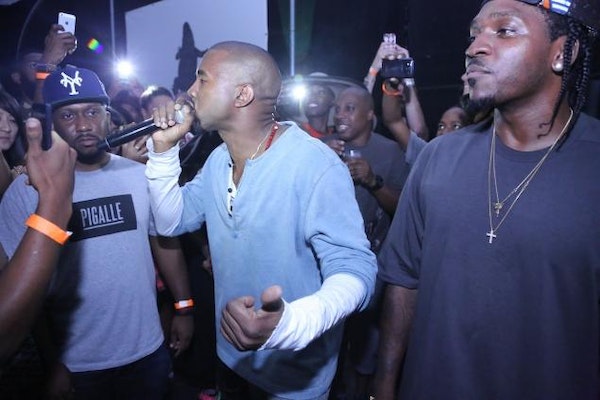 Pusha T just took over as the President of Kanye West’s G.O.O.D. Music. In an interview with Billboard, he said,

A big congratulations are in order. Just got word that you will be the president of G.O.O.D. Music. How was the offer presented you?

Actually, I was flying home and I had just got into my car at the airport. ‘Ye had called me and he was like, “Tell me something. What do you think about being the president of G.O.O.D. Music?” And I was like, “Well, what are the things that you’re looking for?” And he was basically just like, to manicure the label, make it profitable and be very business-oriented about it going forward in a manicured type of way.

What was going through your mind in those four months since? Any pros and cons that you were weighing?

It wasn’t really any time to me. I always look at it as an opportunity to help the team and I think that artistically, me and Kanye have the same vision. He respects me as an artist, a really manicured artist. I’m not out here shooting in the dark, doing any and every thing. When it comes to albums and things like that, I have a very manicured process in which I get to take my time and I think he sorta respects that I get to take my time. It’s never no pressure simply because I think he looks at me and my other businesses and understands that’s why I have this luxury of time in whether it be my clothing stores, my clothing line, just things like that. He just notices me and him don’t ever have that type of pressure, tension, producer-artist relationship. I think he respects that a lot and not to mention, ever since I’ve been on G.O.O.D. Music, there’s been a host of artists that I’ve brought to the table, tried to sign, brought to his attention in trying to sign, whether something was super hot or I called it it’s not going to stand the test of time, it’s wack. I been pretty right in a few regards. Those are the things he keys on as far as I go and just as far as being a part of the culture. He knows I’m outside all the time. He knows that I’m of the people. He knows that I’m in those specific mixes of things that are bubbling up, whether it’s online or before it even really gets hot online. He knows I study those different avenues.
[Full Interview can be found here]

As if the major promotion wasn’t enough, the Virginia legend also dropped off a new remix over at Dr. Dre’s The Pharmacy show on Beats 1. Stream the radio rip of King Push going in on Meek Mill & Drake’s “RICO” below.

PS – It’s really funny he remixed this song. Like really funny. For the people that follow rap like wrestling, Pusha T has had a long-standing beef with Lil Wayne, back to Clipse days. In 2012, he widened his scope and sent lyrical shots at Birdman, Weezy and Drake with “Exodus”. While Drake still hasn’t responded almost 4 years later, all we got from Wayne was a salty tweet and an awful diss track (remember “Ghoulish“?). Maybe Pusha is using “RICO” to remind Drake that he’s still waiting and Meek was low-hanging fruit? Maybe I’m reading too far into this.