The skateboarder and director of Mid90s sat down to talk about how we can all be better humans.

The skateboarder and director of Mid90s sat down to talk about how we can all be better humans. 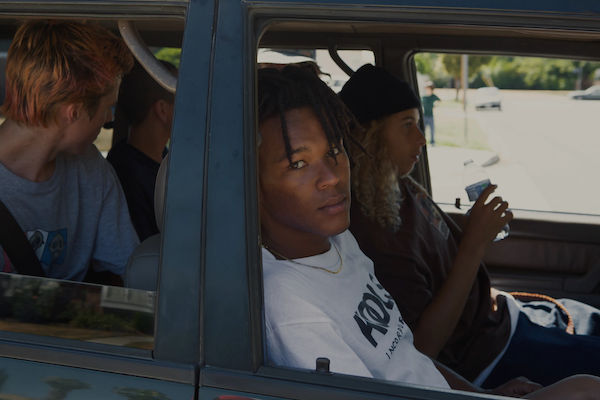 Alongside Jonah Hill‘s directorial debut, Mid90s, he created a zine called Inner Children, where Hill says he “asked twelve people I respect and admire how they’ve learned to love themselves.” One of those people is Na-Kel Smith, a professional skateboarder and part-time rapper who also stars in the film. Read the Q&A below, curtsey of TheFADER.

2 DAYS AWAY! TICKET LINK IN BIO!!! LIFE IS A FUCKING TRIP. WHEN OPPORTUNITIES COME YOJR WAY! GO FOR IT! TRY SOMETHING NEW! JUST JUMP! TRY IT ALL!

Na-Kel Smith: Yo. What up with it? How you doing?

Jonah Hill: Are you in New York?

Jonah: Oh, that’s more fun than hanging out with me. But it’s nice to hear your voice. How old are you, Na-Kel?

Jonah: So you’re 24, I’m 34, and you’re someone who I always listen to. You’re just one of my wisest friends, even though you’re ten years younger than me.

Na-Kel: Yeah, that’s crazy. I feel like the opposite. When I’m around you, I just soak up game.

Jonah: I appreciate that. You just inspire me constantly. In my generation, it wasn’t cool to be inspiring. It was really corny.

Na-Kel: Shit. It’s not cool in my generation. You don’t know how much my friends tell me, “No, you’re preaching. Stop preaching.”

Jonah: When I think about friends of mine who have the right view of things, I always think of you. Does it ever seem like it’s older people who come to you to talk?

Na-Kel: Well, we’re both passionate about something, so we level on that. Once you have passion, you don’t have age anymore, in a sense. Once you dig off into passion and career and shit, everybody’s on their own clock and everybody takes in information differently.

Jonah: And I don’t paint you as, “Oh, he’s this perfect angel.” The reason why you can inspire people is because you’re human.

Na-Kel: Yeah, like the other day, I got into an argument with some lady while we were out skating. She was trying to kick us out and she was being super disrespectful, so then I started being disrespectful back. I’m only human.

After we drove off, I felt horrible because I didn’t handle that situation the right way.

For me, if somebody feels any type of way about something, don’t let it break through and take you to a place you don’t wanna go. Make sure that you stay solid and just brush it off because it’s not worth all that energy.

Jonah: Perfect example of who you are as a person. If I fucked up — especially when I was younger — I’d beat myself up and end up doing something bad to myself or others. You can lose your shit on some lady who was being mean, and then be in the car and go, “Fuck, I should have handled that differently.”

Na-Kel: I feel like you either beat yourself up or you just justify the wrong thing. It don’t gotta be like that. You just feel a little weird because somebody ruffled your feathers, but honestly, you let that happen. That’s how I be feeling. Everybody knows right from wrong. It’s just…Can you live with what you do?

“There’s no book that’s like, ’These are the rules of life.’ If there is, please let me borrow it, because i need that.” —Na-Kel Smith

Na-Kel: It came from fucking up. When I young, I was fighting a lot. If somebody was pushing my buttons, I was the one to take it to that next level. So when people say, “Sit and think about what you’ve done,” I’ve had a lot of time to do that because I’ve been in trouble so much.

Jonah: That’s amazing because when I would get in trouble and people said, “Sit and think about it,” all I’d be sitting and thinking about is how the world did me wrong and, “Fuck everybody else.”

Na-Kel: I went through phases like that, too. And then you start realizing the world doesn’t give a fuck about that. Nobody cares about what happened to you.

Na-Kel: I feel like living life is like you’re creating a character. There are certain traits that you want. There’s certain traits that you don’t want. There’s a way you want to look. You’re just creating who you think you are in your head — who you want to be. The body is basically just a machine and the brain is like a computer, and your spirit is who you really are.That’s what guides all of this — our spirit, right? So basically you’re just dressing up your spirit. That’s what I think a human body is, and you’re just doing what your spirit is telling you to do.

Na-Kel: But on another note, something that does bother me is that I’m not consistent. That’s one thing that I have to fix. I don’t have any insight on how to fix that. I’m really just trying.

Jonah: Well one thing about youth is, you wanna shoot at everything, you know what I mean? Because you guys are creative forces of nature, all of you. You realize as you get older that you have to choose one or two things.

Na-Kel: I don’t think that’s true, that you have to choose. Imagine if I woke up, got my life together, took my shower, answered some emails, made a beat, went skating, got a clip, had a casting or an audition or something, went to that, that’s a full workday. Sure I could be like, “Phew, I’m tired. It’s been a long day,” but then I could go home and instead of just watching some senseless TV, I could spend some quality time with my girlfriend. I could draw clothing designs and stuff. It just depends on how bad you want to do everything that you want to do.

Jonah: Right. And I think once again I’ve learned a lesson from you and I’ve given you bad advice. Maybe it’s all individual. You have so much creative energy you want to give to different things, who am I to say, “Focus on one or two”? I’m not you. I learned a lesson, you know?

Na-Kel: There’s no book that’s like, “These are the rules of life.” If there is, please let me borrow it because I need that.

Say I decide, “Alright, acting is going good. People make millions of dollars acting. But I have to stop skating.” I’m gonna have to sleep on that every night. Quit skating to be an actor? Skating is something that is so close to me that it’s damn near in my bloodstream. That would be crazy. I’m gonna run with everything. I’m gonna do it all.

“The body is basically just a machine and the brain is like a computer, and your spirit is who you really are.” —Na-Kel Smith

Jonah: I’m so grateful that you’re the next generation. You give me hope because I have no doubt you’ll succeed at whatever you do. You just go so one hundred percent in on everything and you have so much talent and the correct ethic to achieve whatever you want. It’s gonna be so exciting to watch.

Na-Kel: I’m really trying. And I have my struggles. I know people will read this, and I don’t want people to think I got it figured out or whatever.

Jonah: Alright, so let me ask the question I’ve asked everybody before we end. And thank you for spending so much time, I know you’re busy and shit. I believe, at 34, that everybody has a version of themselves that they try and hide from the world. Does that make sense?

Na-Kel: Alright, so you know the episode where they take all their negatives out? They take everything bad about them out, and then it creates a whole different person. So it ended up being that without the negative they couldn’t be who they are. I haven’t seen that episode in a minute, but it was something like that.

Jonah: Wow. I think Rick and Morty and Na-kel have just solved it, essentially. That’s such an amazing way to look at it — that if you were just the good parts of you, you wouldn’t be you.

Jonah: Wow. Because I go through that. I go through life where it’s not even like the person’s a bad person, it’s just this thing I’m embarrassed of, this moment.

Na-Kel: Well I have parts of me that I wish would just die. It’s my self-doubt. Basically, my self-doubt and my inconsistency are the two things that really, really bother me.

Jonah: So, when you have those internal moments where you’re self-doubting or bummed that you’re not being consistent, are you able to take a moment and say, “Fuck, I have so much good in my life so I shouldn’t trip”?

Na-Kel: During those times, what I like to do is smoke. I’ll smoke and I’ll sit there and I’ll be like, “Phew, I can relax. I’m in a controlled environment that’s controlled by me.” A lot of the time I talk to my mom or I contact my dad. It’s crazy because I don’t normally talk to anybody. If I talk to you it’s because I’ve already broken myself down in my head.

Jonah: Right, so by the time it’s gotten to anyone else—

Na-Kel: Exactly. That’s why I’m at a waterpark right now. This is the last day of my trip, right? I haven’t got one clip and I’ve been so upset because I feel like I’m not doing what I’m supposed to be doing as a professional skateboarder. But this is my last day. A company paid for me to be out here and I haven’t got any tricks yet, but I’ve been trying. You don’t have to force it.

Jonah: I think what you’re saying sums it up, for me. When something is bothering you in yourself and you take a step back and you look at all those things that are going on and what could have been your life, have some gratitude.

Na-Kel: Yes. And I’m grateful to have a friend like you in my life. I’m glad that we can level on situations. That shit is really cool and I really respect that. I love that.

Jonah: Me too, dude. Well, thank you for doing this, Nak. And enjoy the waterpark. You deserve it, man. Enjoy it.