Festivals in general can be a hassle to deal with. Festivals in Chicago this year have been another story. Weather affected almost every major fest that took place this Summer, with the exception of Lolla. Union Park saw Bjork cut

Festivals in general can be a hassle to deal with. Festivals in Chicago this year have been another story. Weather affected almost every major fest that took place this Summer, with the exception of Lolla. Union Park saw Bjork cut short at Pitchfork and Wu Tang hustled offstage due to wind at North Coast. Perhaps no two artists know how to better handle unexpected festival situations better than Chicago’s own ProbCause and Psalm One, both of who overcame adversity last weekend to put on great shows. 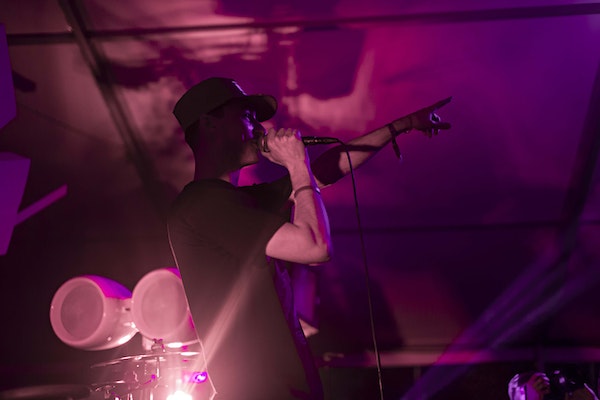 It all started Friday, August 30. Almost minutes after posting a status update to Facebook alerting fans to the location of his stage, ProbCause looked out the window of the car he was riding in to see a steady stream of festival goers moving as one, the wrong direction.

“I got a call from my sister saying she had just gotten kicked out of North Coast,” said Prob. “About five minutes later it was literally hailing so I thought I wasn’t going to play, I thought it would be rained out, I was super salty.”

The quick storm swept through, made itself known and left in a hurry, allowing North Coast organizers to re-open the park with an adjusted schedule that put Prob on the smaller Tent Stage, sandwiched between Mac Miller and Passion Pit’s sets at the same time. Not one to be deterred, the Evanston native got people to the stage and put on one of the most memorable sets of the weekend, according to Consequence of Sound.

If he was upset, it would have been hard to notice as he tore through a lengthy archive while making sure to bring it back to his recent project, The Recipe Vol. 2. The lead single off the project, “LSD” got the crowd moving and Prob and his uber-talented drummer took it from there.

Immediately following his set and due to time constraints from the rain, Prob rushed over to The Bottom Lounge where he was set to open for Just Blaze with Psalm. The two got onstage to do 15 minutes before Sasha Go Hard took over, capping a whirlwind opening day.

Both Psalm and Prob had Saturday off to take in the festival before Psalm faced a bit of adversity of her own, playing the 1:15 opening set of the day on the Dos Equis Stage. Ever the professional, Psalm rocked the stage with Rhymeschool, part of an outreach program she is a part of.

“It was awesome to be asked (to perform) and even more of an honor to come with my mentoring program so it was dope,” said Psalm. “Opening on the third day is challenging, because people aren’t awake yet but we had a nice little crowd and I was happy with it.”

Joining her onstage was one of her students from her mentoring program, Rhymeschool – an after school music program that Psalm works with. As someone with a name in the hip-hop game, it was a unique opportunity to give someone the chance to perform on such a large stage.

“It was awesome because I feel like people in the industry take it for granted to be backstage at these festivals and get VIP and stuff so to be able to give that opportunity to someone who may not have ever done that before it puts a lot of things into perspective and T.J. was very excited.”

Following North Coast, both Psalm One and ProbCause have busy schedules. Prob almost immediately headed out on tour with fellow North Coast performers Cherub while Psalm is heavy in the studio preparing several singles as well as a forthcoming collaboration between the two Chicago artists, Running From The Trap, due out sometime this year.

Check out more from Prob and PsalmOne below:

Probcause – Prelude to Summer Pt. One (Produced by Na$im Williams and Drew Mantia) Shot, Chopped and Directed by Elijah Alvarado