Phony Ppl brings Brooklyn, New York to A COLORS SHOW studios, gifting viewers with an exceptional performance for “Either Way”. 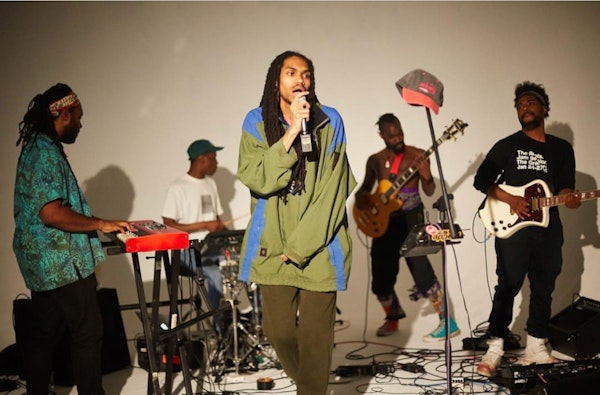 After the release of their latest album, “Mō’zā-ik”, the Brooklyn based ensemble has not let up in their musical advancements, not even in the slightest tone. Over the course of their musical journeys, Phony Ppl has done a formidable job at evolving with the generations and the times, with their upbeat yet bluesy, soulful sound making them quite the unique force—strong in their elaborate statements & euphonious acquisitions.

Today, the group basks in all of their imperative radiance for A COLORS SHOW audience, performing “Either Way”, 10th track derived from the Mō’zā-ik album. In front of a soft sky blue backdrop, the performance begins with lead vocalist, Elbee Thrie, snapping into the microphone, then smooth transitioning by adding a kazoo into the mix which set the stage for a prominent and noteworthy display. Taking his vocals from the top, each band member sits comfortably in their positions, all adorning the performance with an effervescence of their own. As the drums come in, the cohesion between each instrument is apparent, the groove continuously building as the song progresses. This live performance is one of those that showcases just how in tune the group genuinely is.