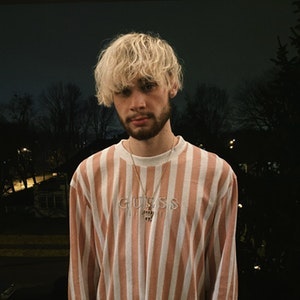 OG is an American rapper, singer, songwriter, and producer from Elizabethtown, KY, located just outside of Louisville, KY. He was born in Dallas, TX on July 19th, 2000, but moved to Kentucky when he was only 2 years old. He began making music when he was only 14 years old, a freshman in high school, being the only kid in school releasing rap music. After a couple of years, he started releasing merch to sell to students in the hallways. His stickers were everywhere and even teachers started buying shirts from the aspiring rapper. His music contains a lot of his everyday life; whether that be goofing around with friends, some fancy jewelry, or dealing with love complications, he’ll turn it into a record. He has a very ambitious personality, as shown throughout his music. He also has a very versatile musical style, which is apparent in his records.

Some of his musical inspirations include artists such as Mac Miller, XXXTentacion, Jack Harlow, Post Malone, and many others, whose influence can be heard throughout his music. He frequently works with his close friends, Tribo, Chod, and his right-hand man producer, YoKazWtf. However, he has collaborated with other artists such as 2018 XXL Freshman: wifisfuneral, K$upreme, TheGoodPerry, JBan$2Turnt, and more. He’s acquired over 4.6M streams on just Spotify alone, to date.

OG’s latest project Hopeless Romantic is a prime example of him showcasing his versatility. The tape was executive produced by producer YoKazWtf, and released on October 25th, 2019. The project has a tracklist of 13 songs and includes guest appearances from artists Chod, Tribo, Toni Bean, and Caleb Kennedy (credited as a songwriter, playing guitar on the opening song). In comparison to his previous mixtape “OG, Vol. 1”, having more aggressive songs throughout the project, Hopeless Romantic shows a softer side of OG that people hadn’t gotten a chance to hear yet. A deeper side of him that’s more in touch with his emotions. Hopeless Romantic is ultimately a compilation of romantic issues that OG has faced during his years of being an artist; being very relatable to a large part of his fanbase.

You can find his music on Apple Music, Spotify, and other streaming platforms.