To watch the duo of M&O is to observe in real time the classic cliche; tension so thick you could cut it with a knife. 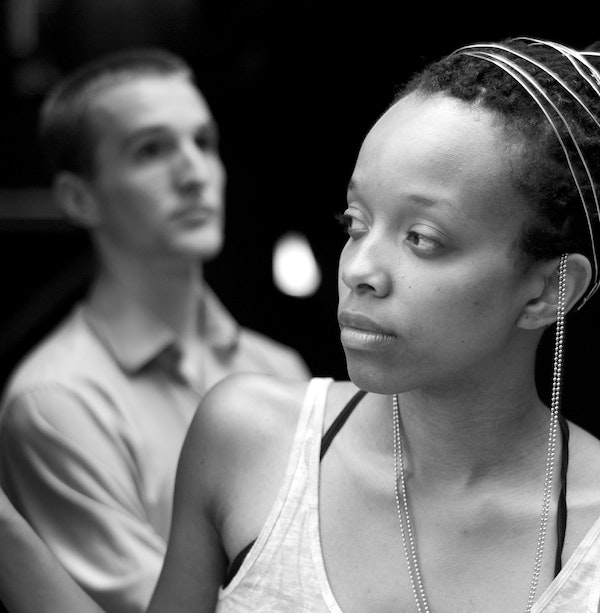 To watch the duo of M&O is to observe in real time the classic cliche; tension so thick you could cut it with a knife. It becomes too spot on, too close to the truth when trying to explain the emotional and creative energies that run between the quickly-rising ‘Adventure Soul’ duo of Jamila Woods and Owen Hill. Woods is at once elegant, wise, beautiful and strong, with a voice that matches on every medium while Hill is rough around the edges, with a gentle demeanor and clairvoyant spirit that emerges within his distinct production pieces. Together, this neo-soul/r&b duo out of Chicago is prepared to finally emerge from their status as one of the city’s best-kept secrets, stepping out with their latest project, Almost Us, released April 3.

It’s late March and the biting cold of the Chicago winter has yet to give way to any semblance of warmth. The first day of Spring was the other day, but anyone who has spent a calendar next to Lake Michigan knows that’s nothing but a placeholder. I pull up to the Bottom Lounge, located just outside of the Loop’s reach to the west, about a half an hour early for the 7 pm set time. Opening for Odd Future-affiliated act The Internet on the blustery Tuesday night, both Jamila and Owen seems in their element, beginning their set with the familiar, “House”, released as a single on The 405 recently.

To be sure, this is far from the first time I’ve seen the pair. Milo & Otis first entered my spectrum about a year and a half ago after they wowed a sold out crowd at Kids These Days’ last headlining show in Chicago at The Vic Theatre. I remember thinking, amongst the chants for KTD that there was something special about the duo. Back then things were a bit less polished, Owen seemed to move about the stage more as he tinkered with knobs, initiating and extinguishing loops. Since then, and their debut project The Joy, Jamila and Otis have gone about developing their sound which benefits from an intensely close relationship that itself has blossomed since meeting at Brown University during a “Racism & Beauty” workshop in 2007.

“I think we’ve had a certain closeness from the jump,” said Hill after the set. “It’s always been a thing where I could make something and she could hear it, make a sketch and I would understand exactly how far it could go.”

Hill moved to Chicago from Atlanta in October 2011 after graduating from Brown University to make music with Woods after trading beats and vocals back and forth over the Internet. Playing somewhat off of their own nicknames and the popular Disney movie, Milo & Otis was formed.

The second song is announced as a new track, “Run”. Immediately, the maturation of the pair can be felt as Phil Collins-like drums build and then fall away leaving room for Woods’ inspired vocals to shine through, keeping things simple yet jarringly interesting. Woods hardly glances to her right, towards Hill throughout the performance, staring straight forward into the crowd. It’s obvious there is an innate respect, trust between the two artists.

“I think more than anything, touring and getting onstage and performing your music in front of people-that’s what gets you close, that’s when you realize that we have each other’s backs. I can challenge you on something and you can challenge me on something,” said Hill.

Everything the two 20-somethings create is deeply personal, whether or not it shows on the surface. Their new project, Almost Us is a mosaic of experiences culled from the past year, recorded in a burst over three weeks earlier this year. As I stand in the quickly-filling room watching as Jamila’s colorful facial expressions animate the soothing vocals that seem to slip from her throat to the world with such ease it’s hard to tell if this is just an exercise for her. As they play the crowd, most of which has shown up halfway through the opening set, obviously there for Syd The Kid, begins to realize what’s onstage before them, shouting in appreciation as Jamila sings “no you can’t fucking touch my hair”.

The music itself creates a map of emotions that are easily identifiable by the way those in the crowd seem to close their eyes, feel the music, understand where it’s coming from. That sentiment is something Jamila and Owen have been working on and part of the tag ‘Adventure Soul’ that has been attached to much of what they do.

That adventure has manifested itself in those in attendance. As Owen fades out his loops, easing his foot from the pedals, Jamila lets out the last sultry notes of the final song and it’s clear the journey has come full circle.

“You can really feel every emotion that you can possibly feel, which is kind of an interesting trip but will leave you in a good place,” said Woods. “That’s one of the things I feel when I listen to the album. I feel like it takes you on that entire arc of a journey.”