Mint Club.s new EP is very extended, 25 tracks extended. So should it be called a mixtape or something else? Mint Club.s Bengfang explained to us why it doesn’t matter anymore, how Mint Club. came together, and whose dog is in all their videos. 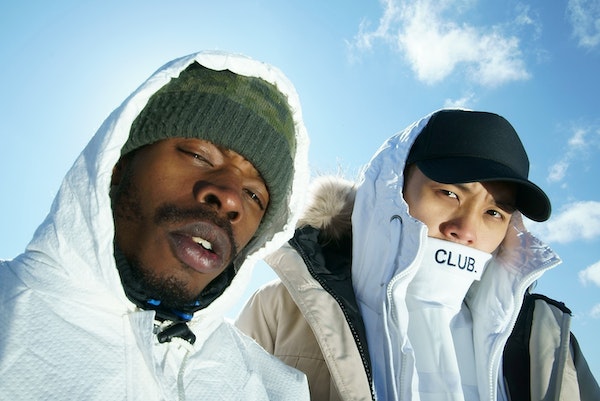 Mint Club.s goal is obviously to be something very ‘Fresh’ What’s with the period? are you making a point…? Ehhh ehhh

It makes the name a complete sentence and statement within itself.

You guys both used to hang out in the old ELEVATOR office a bit, when did you first link up and what made you guys click?

Yeah that loft was awesome, good vibes there. Me and Zip connect in the studio because we both keep it positive. Its like the rules to improve stand up, we don’t deny we just keep going and adding on.

Share with us a little bit of your process on how you guys work together or how a few songs on the EP came together?

The process is different for every song, usually just banging on the keyboard and we hear stuff then build on. We were in a studio session with Ronnie Vyce one day and we had a bottle of tequila. The bottle was running low and Ronnie poured a whole bottle of Robitussin in the bottle. We were pissed at first because he ruined the bottle, but we ended up drinking it and it gave us the weirdest drunk, thats how the song “Tussin” came along.

There are A LOT of songs on this EP, 25 total, but not all would be considered full ‘tracks’ how do you guys know when to call it quits on a track and just move on to the next one?

We usually call it quits after someone knocks out or we start a new beat and then go back to the previous beat and were like this is dope.

Mint Club.s videos have been amazing to watch, really creative, Wojciech Powalka is doing a great job filming, who’s coming up with these ideas?

Its a collaborative effort from everyone involved. Wojciech definitely comes up with the film’s quality but it always comes from the song until
we develop a visual meaning. We are savvy at working with what we have. “Tussin” video is Wojciech’s idea with the feedback/fetishes, it definitely played well with the song.

Whats the most ridiculous thing that has happened while trying to put some of these videos together? And Whose dog is in all the videos?

We lit a bed frame on fire for the “Get Up” video under the pink line and some random neighborhood dudes came and started throwing up signs. We tried to cut them out in the edit but you can still find them. The cops came also came but Pilsen cops are cool. Ronnie Vyce with a half naked girl on his shoulders while children and families walking around was pretty ridiculous also at the conservatory. The dog is Bengfang’s dog named Pikachu.

Whats next? Is a 50 track EP on the way? Or will you go for the world record for number of tracks on an EP? Is there a world record?

EP is a term for when they use to print vinyl records. They can only fit a certain amount of songs on the physical record. We’re in the digital age now. We have unlimited space so there shouldn’t be a standard for length in EP. Even classification for an album or a mixtape is becoming blurred, does it matter what it’s called anymore? We didn’t want to have any classification for anything or else it would be unoriginal.