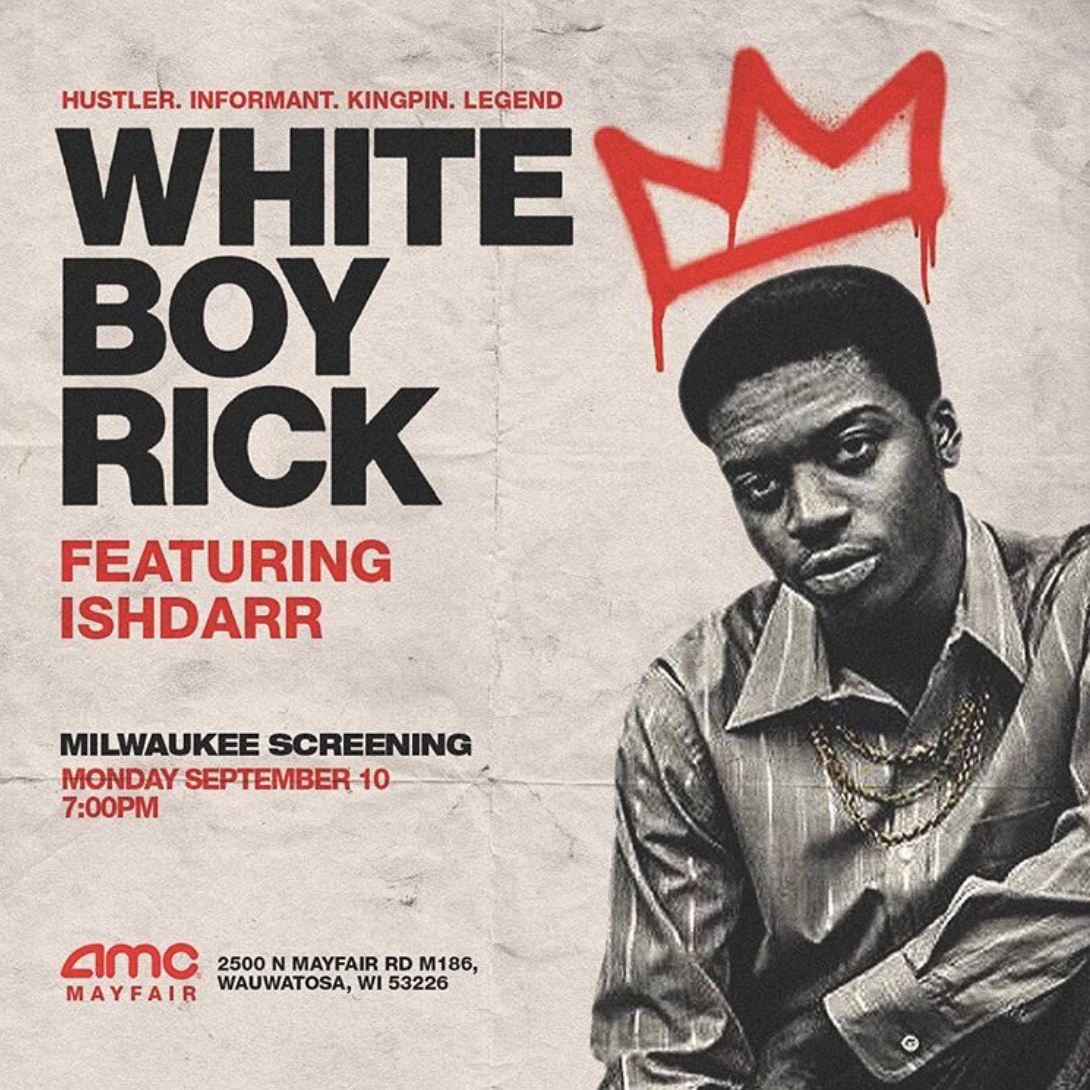 Milwaukee rapper IshDarr recently made his debut on the silver screen by fulfilling a supporting role in White Boy Rick, a Detroit drug film based on the true story of Rick Wershe. By the time he was 17, Rick had worked as an FBI informant and even established himself as a crack kingpin, eventually earning himself a life sentence in prison. Ishmael “IshDarr” Ali plays the part of Rick’s right-hand-man, “Freaky” Steve Roussell, landing the position with limited acting experience outside of high school plays. We had the opportunity to chop it up with the renaissance man to talk youthfulness, acting alongside his brother, Gary Vee and more. Read up on the Milwaukee native in our exclusive full-length interview below.

First of all, congratulations. People work their whole lives for an opportunity like that.

And the video for “Mucho Mango” just dropped after hitting 2 million plays on Spotify.

Just dropped, yes. “Mucho Mango” is doing its damn thing. That’s off of the last project I dropped like, spring of last year. 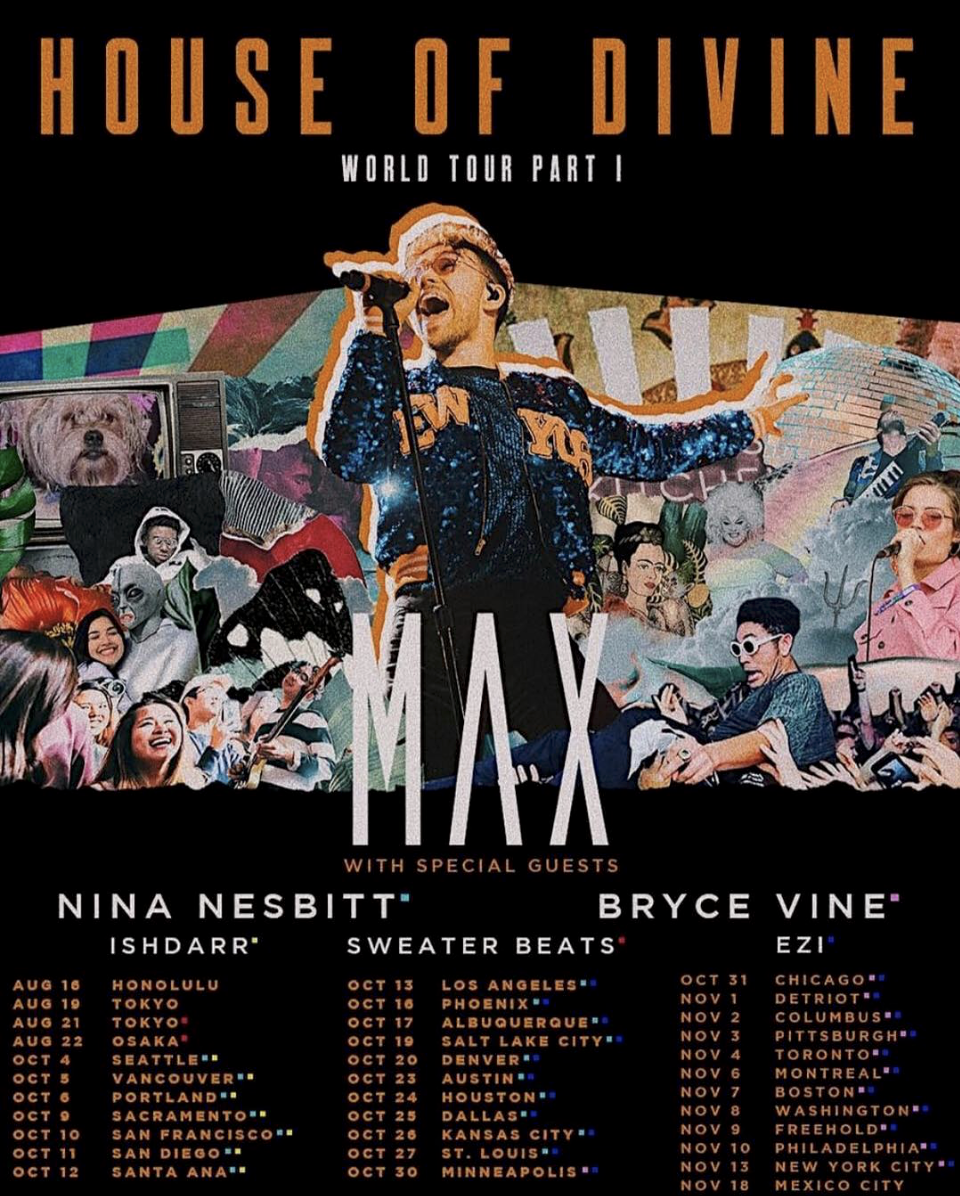 You’re about to go on tour, right?

I’m getting to leave Saturday actually, for the tour. With MAX, which is definitely another fucking blessing. After we dropped the movie, I was going through a whole bunch of shit, just like life shit, getting my life together really, and in the midst of all that, the opportunity to tour with Max came in. We’re leaving out to LA on Saturday. 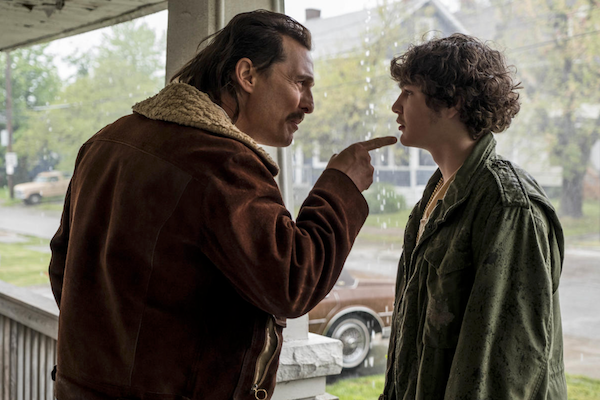 Let’s talk about the movie. What was it like to work with Matthew McConaughey?

The most memorable time in my twenty-two years of living has been on that goddamn movie set. I didn’t get to meet Matthew until probably like my fourth or fifth day on set, and working with him, from that, you feel like you can jump through any damn hoop. I’m not gonna lie, I wasn’t even too familiar with McConaughey’s work before. My mom and my auntie and everybody above me all knew, but I just wasn’t into films that much. Once I did my homework though, I just sat back and listened to everything he had to say. When we were on set, we weren’t even sure when he was acting or being normal. That alone was so inspirational because like, this man has been doing this shit for a minute and it’s in his blood. 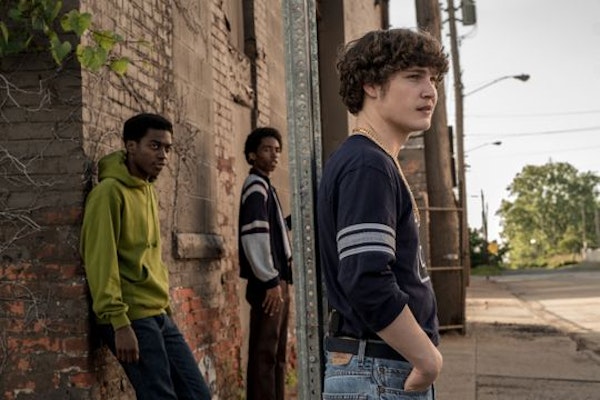 Your character, “Freaky” Steve Roussell, represents youthfulness. You’re the face of the youth, you used to go around to all the high schools around the city and everyone would come out. What does youthfulness mean to you?

It’s literally a damn mindset. My entire inspiration for doing music from day one was to be an Old Soul, Young Spirit. That was the name of my first official mixtape, and it really just defined me, growing up with my moms and my pops, learning so much from them, being so sheltered in a sense. It kept me away from the bullshit that can happen out here. Then at the same time, it never took away my youthfulness, being young and naive to certain things, it just started to show that, with certain things, I have an older mindset, an OG mindset. I’m the younger sibling, but sometimes you would think that I’m the oldest sibling. In a sense, it’s how I grasped what my parents were trying to instill, but also remembering that I’m only 22. Be in the moment, but also be on top of the moment, know exactly what you are and what you’re looking at. Shit, my granny, she’s 65, but you would think she’s like 30.

There’s a crazy amount of young kids taking over these days. What do you think is driving this phenomenon?

In a sense, I think the universe is driving that, and like everybody else around them. It’s really all how you think about it. You know, if you think I’m 25, I’m old as fuck I can’t do anything anymore, but then you look up and you see a 55-year-old just starred in his first movie, that should give everyone hope. There’s literally no age on it. One of my favorite artists is Future, he started rapping young as hell, went through multiple name changes, multiple identities and things didn’t start to pop for him until he was like mid-thirties, damn near. For people to stop limiting themselves, they just need to see other people doing it.

Bro, that’s because Gary Vee is a big ass factor in my life.

It seems like he’s a factor in a lot of successful people’s lives these days.

Gary will find you, bro. Like how the fuck, and why the fuck, am I even a factor on your list bro? It came probably like a year ago, we’re talking on Instagram now. He’ll drop an inspirational video, send it to my DM. Just things that he feels like relate to who I am. He found “Mucho Mango”, put it on his playlist, and reached out and said he’d love to get me in the studio for a sit-down. That’s just inspiration on level ten million. The universe will literally bring it to you, that’s what I’m learning every day, you don’t have to force anything these days. If you just go around and try to force their blessings, that’s when the universe backfires on you.

Milwaukee is similar to Detroit (where the movie takes place) in that there’s a lot of good shit happening, but there’s also a darker side just beneath the surface. Were you thinking about this while filming?

We shot in Cleveland, we didn’t shoot in Detroit. I’ve been to Detroit a few times, and it’s sad but it kind of reminds me of the same thing, Milwaukee. It has its progressive side, but then at the same time, you go three streets down and someone just died, due to pure ignorance. As far as music styles, a lot of people in Milwaukee actually favor the Detroit sound, and it’s because Detroit is so similar to us. Definitely similar, on too many goddamn occasions. 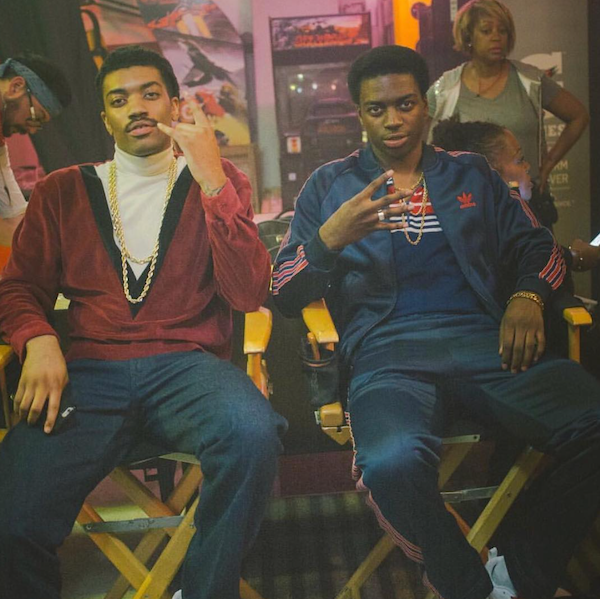 So me and bro, we is like ying and motherfuckin’ yang. We shared a room my whole fucking life, literally. Parents raised us to be best friends, caretakers in a sense, how brothers should be. No amount of success could change us. Bro went to college and I was still grinding it out in high school. The music started picking up for me. By the time bro and I linked back up, we instantly just got right back into it, because he also does music. The movie came into perspective, and besides college, it was going to be the first time I was going to be away from him. I didn’t like being up there solo, no management or nothing, so he came to visit me. He got there and that night we introduced him to the boys and shit then we ended up going to this production party. We walk into the party, and automatically the energy shifted, niggas was just like “We knew it was you, but who the fuck is he?” I go on in the party and leave bro there, and when I get back he was in a fully engaged convo with the director’s assistant. She was asking him how long he was there for, and eventually said: “I know this might sound weird, but you have the perfect face”. It was like man, is she flirting? But then she explained how she was in charge of casting, and that they were still looking for main roles. The next day, she came to my hotel room with a camera, shot a self-tape, and sent it to the director that night. Within 48 hours, Yann (the director) hit her back telling her he loved him and needed her to bring him into the office for the contract. The role he got was Demetrius Johnson, which was also a real person back then who was in the Curry crew, and Rick’s crew once the Curry crew got busted. So, bro was in it from the beginning of the film to the end of the film. I’m still at a loss for words, but if it was any regular ass family, if there was any hate or anything in there, it wouldn’t have worked out. 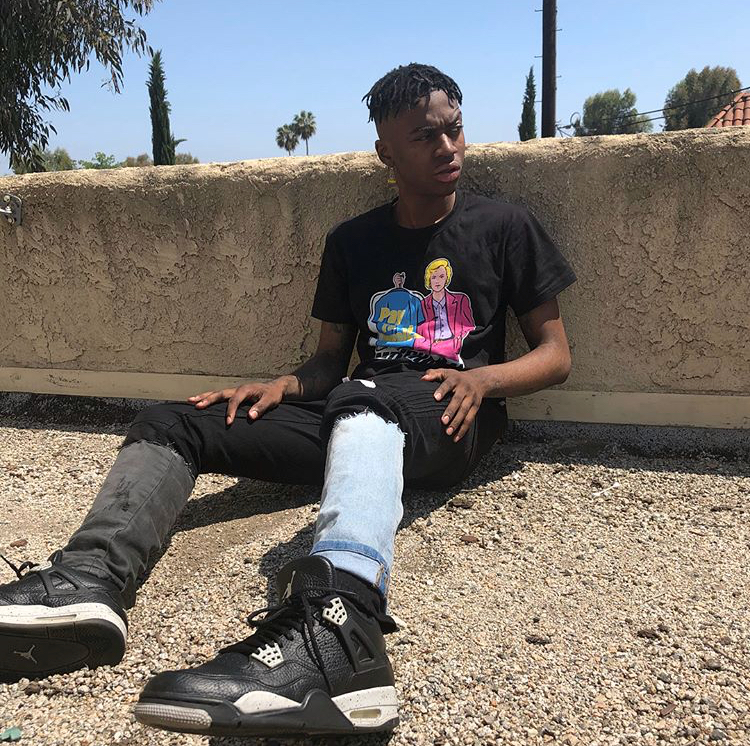 What is one business venture/form of creative expression that you want to explore but haven’t yet?

Really just writing, scripts and potentially even books one day. I write music to write lyrics, that’s cool, but I just want to help people however I can in the sense of physical books. As well as modeling. I’ve touched on it lightly, but not deeply yet. Fashion too, I’m about to really go crazy on this fashion shit. My mom is a fashion designer, so that’s also just a hidden venture that I can’t wait to fully engrave into. I just got my first sewing machine, so I just been like making garments and shit by hand. If you look at my Instagram, it’s a few denim pieces I made myself. It’s so time-consuming, but I can’t wait to go full throttle into this shit.

What do you have coming up music-wise?

I’ve got a full-length project coming up. More of a mixtape than an album, but damn near all mixtapes now are called albums anyway, so. When I do an album, Ima need people to know–this my debut album. I’m touring with the motherfucka, I’m doing everything.

You have one track with a Milwaukee-bred producer that’s been popping up everywhere lately (i.e. 6lack’s East Atlanta Love Letter). Do you have anything else coming with him?

Absolutely, that’s all I gotta say, absolutely. I got projects coming with Bizness Boi, I’m not about to play, that’s my dog.

Tell us about the back-to-school donation tour you recently did and future plans for charity work.

The back to school donation tour was a way that I figured we could help artists give back to Milwaukee and unite people. Our city isn’t one for uniting, so I felt that would be a good icebreaker and make a huge impact on the city. Next on the list is our annual DARRBOYS Coat Drive, which is a drive my brother Boodah and I started 2 years ago to help the cold and homeless during the winter months. 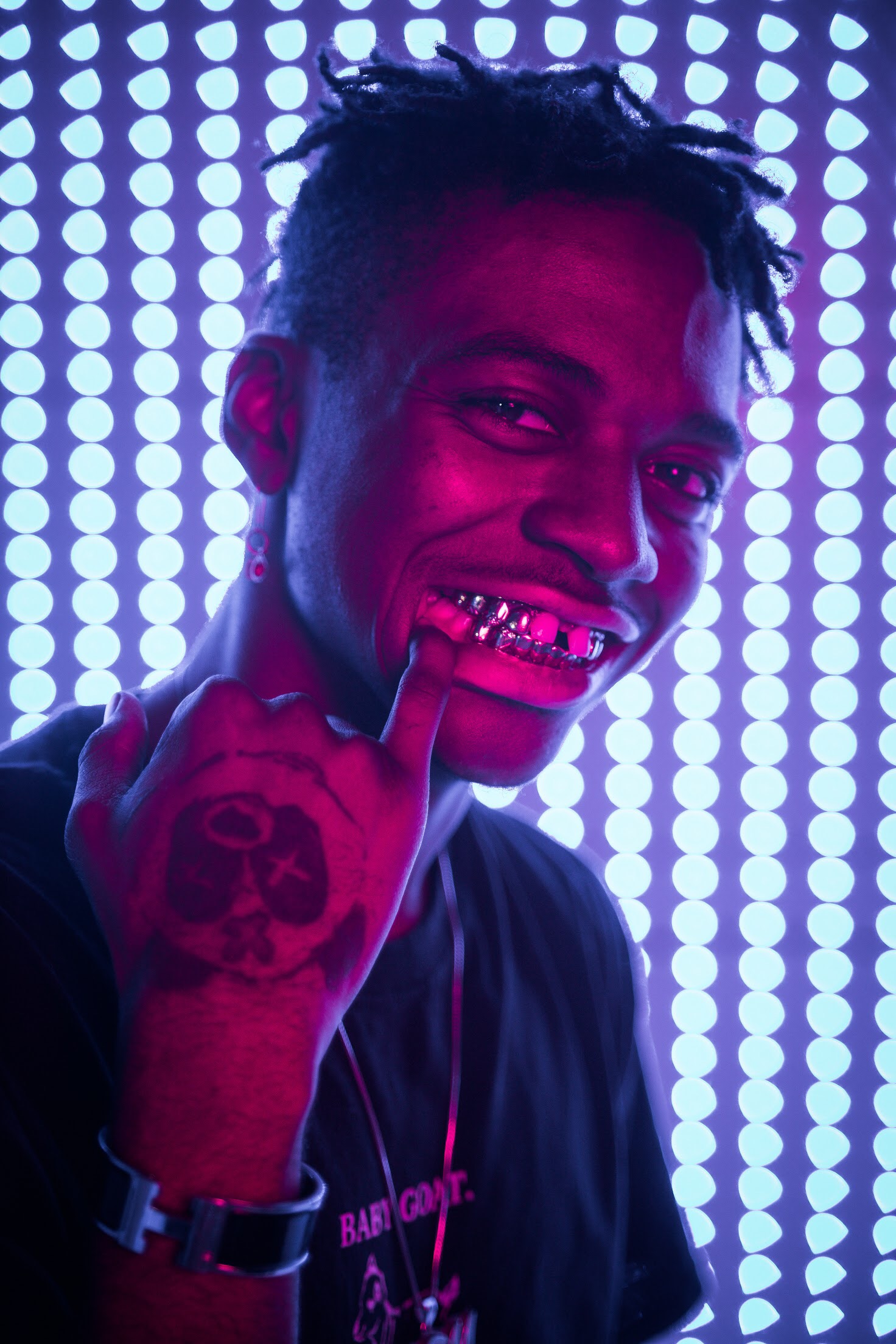 Talking to IshDarr, I could really feel the positive energy and gratefulness pulsate out of him, and it’s likely why the universe treats him so well. Like any great, he’s transcended through several means of creative expression and has no plans of stopping anytime soon, and he even pays his blessings forward. We’re excited to see what the 414-raised creative will amount to, but for now stay watching out pages for the release of his next full-length project.