Meet The Visual Team Behind The Rise of Tekashi 6ix9ine 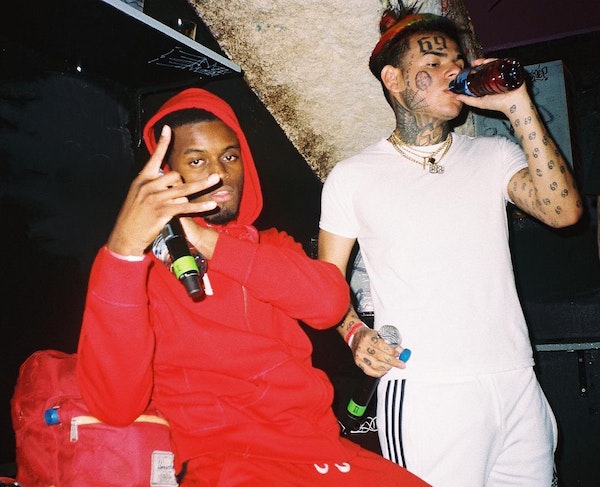 Weeks before being officially released, I remember hearing ‘Gummo’ on Instagram and running the 30-second clip on repeat for minutes on-end. Its addictive nature and overpowering energy combined for me to label Brooklyn native 6ix9ine as one of the most unexpected breakout acts of the year.

Amassing over 60 million views in two months without the help of a major label, the jarring imagery induced retrospective discussion amongst hip-hop fans across the world that’d then return for his follow-up single ‘Kooda’ a few weeks later. Already on-track to out perform ‘Gummo,’ the equally rambunctious record legitimized the hype created by it’s predecessor, both fueled by remarkable visuals from Figure Eight Films, a production duo of TrifeDrew and William Asher.

The two creatives met Tekashi 6ix9ine five years ago, when music was considered merely a hobby.

We all had interest in music and culture. The shit that we did both stood out to one another; we fucked with his overall style and movement, and he fucked with our visuals and all the other creative shit we’d been doing. To be honest, we (69 x Figure Eight) weren’t drawn into the music. The shit that we were doing was way beyond the music, it was about expression and everything else that came with it. The music is just now getting to the point where we all fuck with it and bump it in rotation and shit.

How many videos total have y’all shot together?

I lost count. Anything that’s still on YouTube is basically done by me and Will. Collectively, everything in existence probably comes out to well over 30 or 40. We’re constantly working on shit, everything doesn’t make it out though.

Explain his come-up in your own words. Was it gradual, or did it seem to happen quickly?

It definitely probably seems quick to a lot of people just because ‘Gummo’ & ‘Kooda’ bought a bunch of new eyes that didn’t know about the old shit, but we definitely been at this shit for years. Like long, cold, hard, depressing years. None of this shit is new. Nothing was quick about this process.

Most people don’t realize that Tekashi’s success is completely authentic, without funding from a major label or any elaborate advertising budgets, etc. How did you work with limited resources to build such a huge foundation?

Because we all came from circumstances in life where we had to make the most out of what we were given. None of us come from wealthy backgrounds, so we never really had the resources or infrastructure for anything, we just had to get creative.

In life we all had a lot of practice with turning water into wine, so now we just apply that same knowledge to this music shit. People fuck with it because it’s organic and it’s really us. We’re not influenced by anything but ourselves, and it’s so real that people just naturally fuck with it.

When Tekashi first recorded Gummo, did you immediately have a vision for the video?

Yeah, we were coming up with the record and the video at the same time. Like as the record was being recorded, we were talking about what we were gonna have happen and who was gonna pop out.

What was the basic concept behind the video?

We just brought out all the homies out and had fun.

Did your plans change at all on set? Did you need to switch anything up?

Nope, there were no plans. We straight just blasted our music and had the cameras rolling catching everything. That’s how we do all our shit. We don’t plan, we just do.

How long did it take to shoot?

How many people were on set?

Did you run into any problems while shooting?

Nope. The cops showed up cause it was a whole lot of gang shit going on, but they just told us to turn the music down and we kept it going. All the neighbors were low key shook, but they held it down though. They knew it was all positivity.

Were you surprised by its massive success, or did you have a feeling it’d blow up like it did?

Naw, I wasn’t surprised at all actually. The song was so fire and the video was so fire that we all knew it was the one. We were all previewing it on Snapchat, Instagram, etc. and people kept asking about it. People weren’t all that interested before, that’s why we knew it was something different about this one. When it actually dropped, we did like 250k in one day. We all saw it coming. We knew it was a hit.

Was ‘Kooda’ recorded before or after ‘Gummo’?

‘Kooda’ was recorded after ‘Gummo.’ Probably like a month or so after.

Did you feel extra pressure while making ‘Kooda’ since ‘Gummo’ did so well?

Nope, it’s no pressure ever. We just do what we feel like, and that shit is always fire because we’re not doing anything but having fun and being us. Too much thought is what ruins shit.

Why did you choose to incorporate Blue in the ‘Kooda’ video after having strictly Red in ‘Gummo’?

Because coloring banging isn’t a thing anymore, love is love. Everybody in that video is there because we genuinely fuck with them. ‘Gummo’ was strictly red because those are our immediate niggas, ‘Kooda’ was everybody in the city who fucks with our movement and there were all types of colors there.

Was there anything different about the shooting process for ‘Kooda’ vs ‘Gummo’?

Nope, all organic. We just did what we felt. That’s always gonna be the process. We got our formula, nothing will change that. We just shot KEKE yesterday with A Boogie and Fetty Wap, and had them on the same shit. We just go out have fun and see what we come up with.