Bernard Jabs is the coolest highschooler in the world. 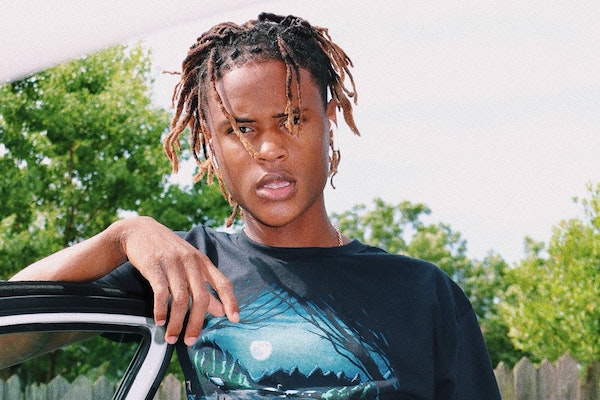 Online buzz is a very real, measurable metric in today’s social media world. Numbers can be fudged, as we all know, but it’s normally pretty easy to tell and feel when the buzz is real. Bernard Jabs has a very real buzz, in large part to his very real talent.

Jabs (who is still in high school, mind you) has been releasing some of the most solid music of 2018, and keeps a very pure strategy to how he builds that buzz. He releases music to SoundCloud, he takes his girl to Zaxby’s – and that’s kind of the whole strategy. After that, it’s up to the people to share it and let the song catch on. No twitter memes, no Instagram antics, just pure talent.

We sat down with the young stunner to talk about his come-up and his current state, ahead of the premiere of his first released music video for “Wesson.” Tune in to Bernard Jabs’s visual debut below, and keep scrolling to read our exchange with the rising star.

Who are you, how old are you, and where are you from?

My name is Bernard Jabs. I’m 17 years old and hail from Tifton, GA.

What’s it like growing up in the middle of Georgia without having that infrastructure of a large city for music like Atlanta?

It’s not bad at all. It doesn’t really matter where you’re from, as long as you have the internet you can do anything you wanna do. And I like seeing the look on people’s faces when I tell them where I’m from and they go, “How far is that from Atlanta?”

You mentioned you’re still currently going to high school – what’s that like? Does the whole school know your music at this point?

It’s fye. Everybody knows my music and if they don’t, they know what I do. The teachers don’t even be tripping on me about homework, it’s cool.

Do teachers ease off you because they know the music is starting to take off?

Yes, exactly. You get it. They think I’m gonna come back and pull an Oprah and give them all cars, hahaha. I just might.

What’s it like trying to balance the attention from the music industry while also trying to be a teenager growing up through high school?

It ain’t hard, I just be working and living. I ain’t dumb so school ain’t hard at all, and I work on music all the time so it’s cool. The attention from the industry just shows me that I’m doing my part.

Your oldest songs on SoundCloud have over 100,000 plays. Did people from around your city know your name at that point or was that all online buzz?

It was online buzz at first. My peers didn’t really believe in my music like they do now. People use to come up to me and ask if my plays on SoundCloud were real, and they would laugh when I said yes. You know how that is though, people be hating. I ain’t care though, because if a kid in China tells me he likes my music, why should I care what a kid up the road thinks? They’ll always notice sooner or later.

Was there a specific moment when you won over your city on the music? If so, how did that feel?

I remember they played my song before a huge football game everybody in my town went to. When the local newspaper interviewed me and asked me how I felt about them playing my song, all I said was “Fye.”

When did you notice your music start to really move? Did you see success fairly immediately or did it take some time?

It was hard at first because I didn’t have a producer or engineer. I used to steal beats off YouTube and drop songs without mixing or mastering. I later taught myself how to mix, and I’ve been mixing all of my own stuff since my song “Lone Ranger.”

How long have you been rapping? How long did it take until you posted your first song?

I always been into music, but I really started taking it serious last summer. I posted some songs when I was 13, but they’re gone now because they weren’t good. I just wanted to see people react to me dropping music, and it worked.

Who did you look up to or listen to as a kid? What other rappers inspired you?

I just use to listen to a lot of Wayne. He was my favorite rapper, and still is. He was the reason I wanted to start rapping honestly.

The video for “Wesson” drops today, produced by two producers you’ve kept working with for years: Nick Mira and Sidepce. How did you meet them?

I met them when I was 14. I stole a beat from this producer that used to be in Internet Money, but he heard it and thought it was hard, so he introduced me to Sidepce and Nick. Now they’re like the brothers I never had. We don’t even be talking about music, I just be reminding them how ugly they are half of the time.

It would have to be Wayne, Travis, Lana Del Rey and The Weeknd.

What’s next for Bernard Jabs?