You probably forgot about Soap Shoes, but this dude Ryan definitely didn’t. Check out his story 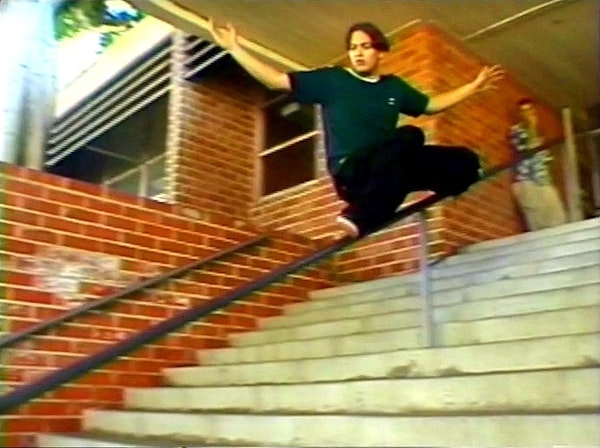 Vice recently caught up with former Professional Soap Shoe team rider (yeah.) Ryan Jaunzemis. In the interview, Ryan reminisces about the extremely short-lived golden era of the rail-grindable shoes that were supposed to do away with the prehistoric skateboard. Allegedly there was quite a bit of drugs and pussy involved with the Soap Shoe circuit back then. Allegedly. Peep some highlights from the interview below, and I’ll see you guys out in the streets 😉 LOLOL

What was it like back in the day to get paid for sliding around?
It was amazing. There was a lot of house parties back then. That was a time when hip-hop music was in its prime. JNCO jeans were the big fashion, white shirts and visors. Putting bleach and Sun-In in your hair. And then touring around, grinding these huge rails.

My video was playing in stores in Pacific Sunwear and Journeys all over the country. It was super cool. And then being able to make $1,000 a day—at the same time I was working at an ice cream store called Scoops, and I was making $6 and some change in an hour, and to make $1,000, that would take me like two months of scooping ice cream.

For a 17-year-old kid, that was awesome.

Were there groupies?
What they would do is they’d send us to the high school with a little practice rail and a bunch of stickers and a notepad to collect emails. This is before Facebook and Instagram, this is back when the biggest thing online was AOL, with the little AOL chat rooms and “you’ve got mail” and that kind of thing.

I would take all the Soap stickers and I would write my phone number on the back. And then I’d hand ’em out to the girls. Then there was times on tour—Soap was paying for our hotel rooms, and we’d meet other people at the convention show and they’d say like, “Oh, you guys are those Soapers!” And we’re like, “Hey, we need booze.” We’d slip ’em a couple bucks or whatever, and we’d have a whole ice chest full of beer, and then we’re like, “OK, the party’s in room whatever,” and there’d be all these little Soap groupies there like, “Oh my God, that’s so cool, your shoes are so awesome.”

Was the Soap scene a drug-fueled one?
One of the interesting things about Soaps is they developed these plates called “Maxwell plates,” which are also called “stash plates.” When you’re walking around with Soaps, sometimes you step on the stairs and you slip [because of the concavity at the bottom], and a lot of the schools were complaining. So Soap came out with these filler plates, and you lock ’em in and they look just like regular shoes, so you can walk normally. Raving was really big back in the day, in Los Angeles, so we were using the shoes to sneak drugs into raves. We’d be selling ecstasy, and girls would be like, “Oh, how do you sneak this in?” And we’re like, “These are Soap shoes,” and they’re like, “Ah, this is so cool!” So, yeah.

Why not just get a skateboard?
The most interesting thing about Soaps—what people don’t understand—people say, “Well why don’t you just rollerblade, or why don’t you just skateboard?” And the guys that are really into Soaps, they kind of discover that in Soaping, you can grind stuff that isn’t accessible with your skateboard or blades. For example, like, if someone wanted to grind the rails inside Disneyland, or Magic Mountain—there’s these amazing red rails by the Ninja roller coaster at Magic Mountain—you can’t really rollerblade through the front gate of Magic Mountain, so you can’t grind those rails, because you’d get kicked out. Or the fountain in the mall, the Galleria Mall, because security would kick you out. But with Soap shoes, it’s so underground and so concealed that no one knows you have ’em.

You can hang out at the mall, and you can go grind the mall, you can hang out, have a hotdog on a stick, have a milkshake, hang out with your friends and go grind, and then when security comes by they’ll just say, “Hey, you guys can’t be skateboarding here.” And you’re like, “I don’t see any skateboards. There were some skateboarders, but they just left.” And security will be like, “Oh, OK,” and they’ll just leave.

There’s something kind of secretive about it, and it kind of calls to a certain type of individual. A lot of times in the casinos, those are kind of fun places for me to grind because I live in Las Vegas now. I can’t, obviously, rollerblade in a casino because they’d have a shit fit. But I can wear Soaps, and I can grind on the sinks inside the men’s restroom. I can slide across the marble sinks, and stuff like that. I grinded on one of the slot machines over there, that was kind of fun. And they were like, “What are you doing?!” And I was like, “Oh, nothing, I just drank too much.” And they’re like, “Oh, OK.” But we Soapers, we’re a different breed. We’re troubled.