Get familiar with the captivating duo. 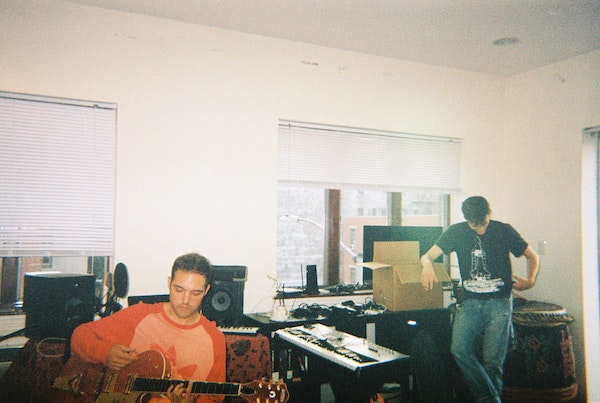 Almost three years ago, I was looking through Skizzy Mars’s liked tracks on SoundCloud and found “Mistakes Like This” by Prelow. At the time, the NYC duo had only about a thousand followers. I couldn’t believe my ears when I first heard the brilliantly innovative production of Matt Walsh that effortlessly blended four different genres, mixing swimmingly with the cordial vocals and creamy guitar licks of Jesse Aicher, all blending together into one mellow, undeniably cool sound that can only be described as Prelow. Now, the band has major-label backings and a countless shows under their belt, yet they’re still not even close to the level they deserve to be at. I was more than fortunate to be able to have a conversation with Matt and Jessie t0 discuss their debut album, upcoming tour, and interactions with trippy dudes in the woods. Read our full interview with Prelow below.

Your debut EP, Why Does Everything Happen So Much, was released over 2 years ago, and in the meantime you’ve only dropped a few singles and a video. You must be cookin’ up something big.

Jesse: Yeah, well we’re still working right now on our debut album, and we’re hoping to finish that up in the next few months. We’ll probably be working up until this tour we’re going on mid-October through November, and yeah we’ve just been working on lots of music and wanted to put out a few singles to sort of get some new music out to the fans while we’re still cookin’.

Will you be headlining that tour?

Tell us a a bit about the video you recently shot for your latest single “Backseat.”

Jesse: Yeah we just came out to LA to shoot the video for “Backseat”.

Matt: We shot it with this production company called SixTwentySix, we really like their style, they’re doing a bunch of artists we respect. They’re doing Lil Yachty, Billie Eilish, and Migos videos.

Jesse: We worked with this director Christ, and we hope it turns out to be pretty cool. We got to get our friend Swizzymack in the video as well, which was an exciting last-minute thing.

I know Matt used to work with a lot of rappers before you two came together to form Prelow. What rappers do you listen to?

Matt: I’ve always listened to rap. My main production influences, I’d say, are like the early 2000’s Roc-a-Fella and Dr. Dre. That’s what got me into production when I was 16. It’s one of my favorite genres, for sure. We’ve been listening to the Lil Uzi tape a lot, we listen to the Brockhampton album. Really like Future, and stuff.

You guys went on tour with Skizzy Mars a while ago, someone very similar to Prelow in that he sits somewhere in between the indie/alternative, electronic, and hip-hop genres. Did touring with Skizzy have any influence  on the development of your sound?

Jesse: Before we went on tour with Skizzy, we had finished our initial EP. But, I think just seeing like how he went on the road and put on the shows and interacted with his fans was definitely like a learning experience for us. And I think just like being around him like that definitely influenced us as to how to treat those things. And he also is cool because he reaches out to a lot of smaller acts with different sounds and like tries to incorporate that into his music. And I think we also like look to a lot of genres for influence, so I see a lot of similarities in that respect. It was cool with him because when we first met, we really bonded over our love for these bands like Death Cab for Cutie, The Strokes, and Phoenix and stuff. So it was cool to connect on that level, too.

I really liked Skizzy’s remix of “Mistakes Like This”. Are you guys working on any new music with him?

Jesse: We’re actually planning to meet up with him sometime in the next week while we’re out here, and just vibe out to some music and see what’s up.

What was the significance of having that Strokes line in the “Don’t Wanna End The Night” video.

Matt: We were actually doing karaoke in the video with our friends, and we were just singing that one.

That music video pictures you guys having a great time enjoying nightlife in NYC. With making music being your full-time job, have you had to sacrifice any fun that an average person in their early twenties would be having?

Matt: Well, I know a lot of our songs are based off of the things that actually happen in our lives. So, we always try to keep a really solid balance between a really consistent recording schedule and then also going out and having fun. But we do work on music every day.

Do you guys have a quick work flow or are you closer to being perfectionists, where you’ll sit on a song for months or even years until it’s done?

Jesse: We definitely err on the side of perfectionist.

I remember seeing on your Instagram once that you were going to go to a cabin in the middle of the woods and working on a lot of music. Wanna tell us about this?

Jesse: Yeah, this was a little while ago, but we went up to Woodstock, New York, and we stayed at this cabin, and yeah we got to work on some good music. There’s some stuff from that session that we’re still kicking around. I think the coolest part of that was that we lived next to this really trippy dude that was like the caretaker of this cabin, this dude Jeff. We ended up hanging out with him a lot, and he was this crazy guy like he would fly drones over the cabin and like film us.

Matt: Yeah, he actually shot some shit on Deadliest Catch, too.

So he was just filming you from these drones for his own enjoyment?

Jesse: Yeah, for his own enjoyment.

Matt: Well we also liked what he was doing, too. We’re probably actually gonna use the footage eventually. He owns a ton of land, and we actually took his ATV’s out and filmed a music video on his ATV’s.

Jesse: We’re talking a hella lot about Jeff right now for some reason. *laughs* We just got out to LA man and we’re like smoking a little weed right now, chillin, so.

A lot of your songs are about females, do either of you have a significant other?

If you had to pick one up-and-coming artist that you would put all your bets on, who would it be?

Matt: I think there’s this one rapper, from New York, who actually is working with a couple of our friends, but I think that Squidnice will be big.

Jesse: I think my friend London O’Connor’s gonna be pretty big in the next years years.