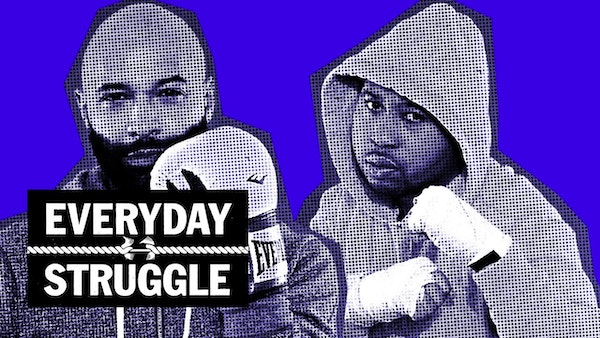 Joe Budden has been characterized as the Scrooge of hip-hop. When he isn’t yelling incessantly at DJ Akademiks or casually shading star-level rappers for insurmountable reasons, the 37-year-old, “Stephen A. Smith of Hip Hop” is lambasting youthful emcees for having a good time with their craft. His scruffy beard hides his heard but hardly seen, snarl that comprises his resting face. That and the prominent veins popping out of his brow and neck when he’s particularly upset about something.

Complex’s Everyday Struggle is the playground created for Joe Budden to have fun in. Along for the shenanigans are DJ Akademiks — a relatively mild-mannered YouTuber who is a serious fan of gossip — and Nadeska Alexis, the show’s straight-forward, balance between the two conflicting characters. The three regularly interview the “who’s who” in music, with Budden often antagonizing those who he deems inferior to his rap style. Or if they rub him the wrong way when he questions them.

While the show hasn’t been the smashing success that Complex probably wished it to be overnight, it’s grown from a casually interesting program to vital part of the casual hip-hop fan’s day; in May the program averaged 400,000 views per episode. Often times, it’s to see Budden bullying either his cohosts or rapper guests; but its prevalence in pop culture can be observed from GIFs to memes everywhere.

So when Joe Budden, one of the most prevalent celebrities on Twitter who never refrains from talking to fans, got candid about Complex renewing his contract for the show, fans began to speculate.

I created that show… I’ll create another if need be… & another & another….. it’s when u CANT create that you move WITHOUT integrity… https://t.co/aZdMDI3eOG

Is this the final chapter of Budden’s stint with Complex? Could the show survive without his fiery input? Is Complex out of their minds to even think of letting Hip Hop’s most controversial “old-head” go?

While the first question remains unanswered, the second and third questions can be answered with a resounding yes.

Who knows what the minds over at Complex are thinking. Maybe the viewer-base isn’t what they desire moving forward. Joe’s shenanigans could be impacting a media company in more negative ways than their previously established gentrified personas have in the past (see Wale’s tirade against the company for example). Whatever the reason may be, Complex is out of their mind if they even think about getting rid of the biggest name attached to their platform.

But this move could open up an unprecedented path for the show; one forged in millenial influence that replaces the hard-boiled, tense feel of the program into something more easy-flowing and relaxed. It all starts with the role of DJ Akademiks growing, with him stepping up to the plate.

Nadeska’s job, while some may deem easy, is perhaps the hardest. She’s the mediator of the group, playing off of the personalities of both names to bring something more subtle, more level to the paying field. Budden’s fiery resolve made for some interesting moments on her part, but Akademiks cool nature always made everything smooth in the end.

While her role shouldn’t change entirely, Akademiks’ undoubtedly will. He’s the butt of the joke; the punching bag for Budden and artists to relay their pent up frustrations for comedic relief. Erykah Badu, music’s most kindred spirit, even layed into him in a drawn out, admittedly hilarious, comparison to Jerry from Tom and Jerry. While he shrugs off most jokes and arguments directed towards his way, his character receives the full brunt of the action. An already devalued look of the guy who promotes Boonk and Lil Pump’s less than honorable actions grows even lower when he’s shown to lack the backbone necessary to stand toe to toe with the artists he’s admired coming up.

Budden frequently takes advantage of this; fuirously demeaning the 26-year-old Youtuber, ultimately testing the extent of his manhood. And on every occasion, Akademiks refrains from confrontation. Even when artists question him and openly admonish him to his face, he changes the subject. He then later posts on social media accounts as if nothing has happened to him, often marketing the very recordings of disrespect violated towards him. He may laugh or crack a joke to the virtual applause and laughter of fans online, but he doesn’t realize that they are laughing at him, not with him.

If Budden was to indeed exit the show, Akademiks ability to lead it would be placed into serious consideration. As it stands, he hasn’t displayed an ability to lead serious discussion without retreating to the shadows, letting adversaries speak over him instead of with him. This could be a personality defect; years of a withdrawn personality manifesting itself in the public eye. Or maybe, he really is just nervous and lacking of the ilk needed to confront. Either way, to save the show and push it into a new age, he needs to be able to stand on his own.

He would need to create his own character, not a carbon copy of Budden’s middle-aged angst. While he is in need of displaying his cahones, he should also keep the easy-going nature that fans know and love. Striking the delicate balance will be a challenge but this would change the show’s aesthetic into something more unstable, more challenging. In turbulent times such as these where traditions are often broken in place of new, exciting possibilities, this could serve as a welcome look at something new; an Everyday Struggle that dominates the air waves. Nadeska could expand as moderator to the voice of reason to Academics firm, yet gentle, command of the conversation. Imagine a show where the interviewers are respected and everyone has a good time, while dropping some serious information that graces the pages of publications everywhere. Think The Breakfast Club 2.0. We could be looking at the next evolution of Hip Hop news and virtual editorials at this very moment.

If Budden stays, this long-winded explanation of what could come of the show’s future will be for naught. But if he is gone, a realm of exciting possibilites and unpredictable outcomes has opened up, one where Akademiks and Nadeska could benefit by growing as interviewers, moderators, and media personalities. The battle for on-air dominance could possibly have a new, exciting contender in Everyday Struggle. Without the shadow of Joe Budden’s arrogance, the platform can grow to become an integral aspect of not just Hip Hop culture — but mainstream culture as well.