After learning to accept the equal balance of positive and negative in his life, the Denver artist delivered one of his most impressive projects yet. 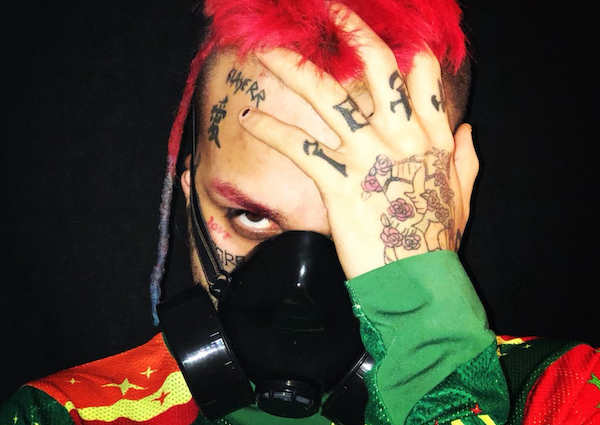 For the past 23 years, Denver native ITSOKTOCRY has been hard at work collecting a lifetime full of experiences to help shape the most unique sound to ever come out of the Mile High City. Blending elements of hardcore metal and modern hip-hop, his personable tracks have racked up millions of streams online and simultaneously attracted a dedicated fanbase that’d likely go to war for the red-haired sensation.

On February 28th ITSOKTOCRY released an eight-track project titled “PASTELGORE,” on which his typical angsty approach was entirely absent. The grungy style had been a staple in all of his previous work, making it a huge risk to switch up the already-perfected formula. The gamble proved to be favorable, as longtime fans and new listeners alike met the project with high praise.

We recently had a conversation with the tattooed superstar to learn more about his newly developed sound, and learned a lot more than expected.

Before you released “PASTELGORE,” most of your music could’ve been described as a mix between rap and metal. What caused you to ditch the hardcore sound on the new project?

My style of music is always changing and always evolving. I struggle with bipolar disease; so sometimes I feel like Hercules on top of the world, while other times I can’t eat or sleep and don’t even want to get out of bed. When your life is constantly in a state of inconsistency due to mood and my brain activity, it’s hard to stick to one mindset. When I’m feeling down, most of the time it’s paired with anger and anxiety which results in darker grittier music. When I’m up, it’s paired with euphoria and adrenaline resulting in more more up-tempo music. Lately I’ve felt like I’m on top of the world, and my project reflects that.

Do you approach an album with a particular vision, or let things fall into place as they happen?

I’m a very unorganized person as well as a chronic procrastinator, so when it comes to putting out a project I have to imagine the finished product in my head before I even start. I have to pick a name and a cohesive album artwork, as well as a release date. When that’s all done, I can start working on the project.

I’m not like most other artists, in the sense that I can’t just go into the studio and record whenever I want. I have to be feeling some type of way, whether it’s positive or negative. I still have to be in my feelings. I started making music as an emotional release because I didn’t have anyone to talk to or have any friends, so the only way I know how to make music is by turning my emotions into sound. I don’t know how to inorganically create a pseudo-emotional product or just rhyme random words together to make a song. All the lyrics and everything you hear and see from “PASTELGORE” as a whole is just a reflection of my life and my emotions the past few months.

Were there any major real-life events that played a notable part in the creation of your new project?

Yeah, this is the first time that I’ve accepted the equal balance of positive and negative in my life. I’ve always struggled with the constant change without really accepting it, but now I understand and embrace it. I’ve also never been as confident in making music as I have been with this project. Similar to a Yin and Yang, “PASTELGORE” is a perfect blend of my good and evil. I’m learning to accept and love myself for who I am for real, and that played the most important part in shaping the sound of the record.

Was there anything different about the creative process in crafting a bright, upbeat album as opposed to a darker, more edgy project?

To be honest with you it’s 100 times easier for me to make hard core/death metal type songs, just because that’s how I grew up. I grew up in bands and around the metal scene, so everything about the culture is ingrained in my brain. When it comes down to actually recording something, that type of sound happens a lot faster. I spent most of my life drowning in my teen angst, so I’m used to being depressed and angry. It’s very easy for me to translate that onto a computer and into a song.

When it comes to making an upbeat and happy song, I’m just learning how to fuck with myself and honestly just recently built up a decent self-esteem. I used to be very self-conscious, and being self-conscious is your worst enemy when you have headphones on and you’re behind a microphone trying to talk about how lit you are. Building confidence in myself has been a longer process for me personally, but the overall creative process is a little bit different when I’m recording a hard-core or metal song. Most of the time, my blood pressure is through the roof and I’m angry or crying. When I making an upbeat song, I’m usually smoking a fat doink, chilling with my bro SUPERLOVE and just gazing myself off the good energy of the room.

Tracks like “Eyes On Me” and “Vampires Smoke Menthols” are already two of your biggest records ever. Why do you think these particular songs connected with an audience on such a high level?

I think that those particular singles connected with people because they’re very real. You can definitely hear the difference in the confidence of my voice on those two songs compared to my earlier music. Not to mention, the mixing and mastering quality of my newer music is so much better than what it used to be. This is the first cohesive project I’ve had where everything is a professional sounding product, and that’s what people love the most about it I think.

We saw Flexin Fab, Bobby Johnson and a few more of our favorites on the track listing. What’s your favorite part about working with other musicians? Anyone in particular that you find it easy/natural to collaborate with?

For starters, I’m a superhero and my superpower is empathy. When I connect with another artist for a collab, I’m very easily able to emotionally connect with them regardless of the situation, and often find myself matching their wavelength and making a cohesive song. I grew up not having any friends and being bullied most of my life, so when someone on the Internet fucks with my music and I fuck with their music, I definitely want to make songs with them. It gives me a sense of connection to other human beings. I spend 99% of my time locked in my apartment by myself with my cat, and I don’t get much human interaction. I guess collaboration just makes me feel human and connected.

Do you find the label of a “SoundCloud artist” to be offensive? Do you think that term should be embraced or abolished?

People are hypersensitive today. Not everybody is going to like the music you put out, and not everybody is going to think your lyrics are acceptable. But that’s the cool thing about art; it’s open to interpretation and it’s different for everybody. The experience that I have making or listening to a song can be a completely different experience than what someone else has. And who am I to tell somebody else what they should or shouldn’t make artistically? That’s super blasphemous for an artist to even say.

People just make whatever the fuck they want. Who gives a shit? Sometimes I hear stuff in music that I don’t necessarily agree with, but then it just circles back around to empathy. I think one of the biggest keys to success is learning how not to be a hater. If you waste all your time hating on somebody else’s grind, then that’s just a bunch of time you wasted putting into your own grind.