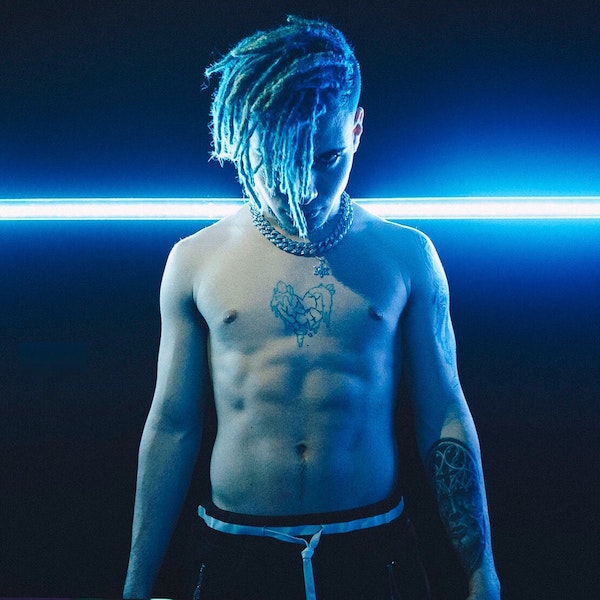 South Florida’s hip-hop scene had a breakout year in 2017, and looks to continue this trend into the new year. Thankfully, there are still a handful of future stars in the Sunshine State that’ve yet to hit the mainstream, one of which goes by the name of Icy Narco.

A native of Florida himself, Mars of The Mars Files recently sat down with the blue-haired sensation to learn more about his rather mysterious backstory.

Watch and read the full interview below.

Being myself. Everybody’s trying to be myself. I’m just being Icy, I’m moving how I want to move. People are too focused on what the person on-top of them is telling them to do. My team supplies all the power I need, but they move the way I want them to move.

I’ve always freestyled since I was young, and people told me it sounded too good. I made my first song when I was 15. It always had that melodic hook and it sounded good, but I pushed it to the side. When Smokepurpp and Lil Pump started blowing up, I kinda looked at the rap game and was like “Alright, my time is gonna come.” Now is my time to start taking it serious, because everyone done blew up. Now that no one’s in my lane in Miami, I can start making my own wave. I don’t need nobody; none of these artists are gonna “Lil Bro” me saying that I blew up in their wave. I’m gonna do this by myself. I’m starting my own wave, and people are gonna blow up after me.

Did you know Purpp or Pump?

No. I didn’t know them like that, I never went to any shows.

You don’t have many songs on your SoundCloud page.

Not really. I had songs on my phone that I didn’t put out, I was just working on my craft. A lot of these niggas are blowing up, and finding their sound as they blow up. I already found that shit bro. There are no throwaway songs. Everything I record is a banger.

How do you stay so patient?

I just believed in myself. I knew all the doors were closed for me, but I also knew that as soon as I started dropping music everything would come to me. And it is. Everything that I’ve been wanting to do is happening, so I know I’m doing something right.

How do you feel about comparisons to Pump or X?

I don’t like that shit at all. It comes with the industry, and it builds hype. But at the same time, my hair doesn’t look like his. My sound is nothing like his. And ff people hear my music, they’re gonna hear the hard-ass, Icy sound that’s nothing like them. In time (the comparisons) will be uncovered. People are gonna start growing love for me, because they can’t find my sound anywhere else.

Who had the hair blue first?

I had my hair blue first. If I was the basic SoundCloud rapper, I’d start some retarted beef for some clout. I don’t give a fuck, people can do what they want. At the end of the day, my hair is blue and it has a theme to it. It has a meaning. I don’t wanna freeload off of someone’s beef.

All my music is a freestyle. I force myself to rap. I would YouTube “Five Fingers of Death” instrumentals and just run through them. Most of these people can’t really rap like that. Old heads have really been snapping on us lately, but I’m really lyrical so they’re not gonna be able to throw that shit on me.

So you’ve been training for the Sway freestyle?

Oh yeah, I’ve been in training. Rocky Balboa in this bitch.

How’d you come up with your name?

Random things come to my brain. That was one of the names that came to my head.

What were the others?

Just that one bro. My brother is a Narco, and Icy was the first thing that came to my mind. I fuck with my name, that shit is hard.

How do you make money?

I worked in a restaurant. I had to get that first money to invest for the studio. Before that, I used to rob anybody in any possible way. I got so much bad karma from that shit, to the point where I’d wake up and everything would go wrong. That fucked me up in the head. Karma is real. She fucked me over for all the shit I’ve done, so now I don’t wanna do nothing illegal. I don’t wanna do no fuck shit to nobody.

I don’t really fuck with pills. Even when I was going through depression, I didn’t turn to drugs because I knew they’d be a temporary solution. I want win and I want to be successful, so I don’t want to have those problems getting me more depressed on the way.

Were you a big Fredo Santana or Lil Peep fan?

Yeah, big Lil Peep fan. Rest In Peace to Fredo Santana and Lil Peep. Both of them were sad losses. It’s crazy that Fredo Santana died at 27. I’m gonna die at 27, too.

Why? You just wanna be part of the club?

Have you always been getting bitches?

Bro let me get this clear; all the rappers that’re ugly as fuck getting bitches because of their money and clout, good for you. But before the money and clout, I been had the bad bitches. I got a personality that bad bitches dig. With me having money, power and clout, I’m gonna start dating one of the Kardashians. Watch.

Where’s Icy Narco going to be at this time next year?

I am from the future. I came back to reassure everything. In the future already blew up, I already sold out shows, I already have a bunch of platinum hits. I experienced a lot of shit already, that’s why I’m so cool about it. I became famous but have a few things I want to change, so I just came back to make sure everything is perfect.

How’d you link with RedDrum?

Aye shout out my nigga RedDrum. He’s a producer that saw the potential in me from the jump. A lot of these niggas just wanna freeload off producers, they slide in the DM’s like “Yo gimme beats bruh,” but if you want to do shit the right way, listen to how you do it; buy one of his beats and snap on it. Send it to him, and if he fucks with what you did, he’ll send you free beats. Don’t expect free beats, you got to grind for your spot.

Be attacked by 70 housecats or two lions?

70 housecats. Can you imagine two fatass lions? I’d prolly grab one cat by the tail and smack all of em.

Pause time, because I can’t change the past.

Live twice as long or have 10 million dollars?

Speak every language or talk to animals?

Talk to animals, I hate talking to people. I’ll have a full-on conversation with a Dolphin. Or a Yeti.

Read minds. It’d be cool to be in a room of people and see what they’re thinking. Can you imagine being with a badass bitch, and knowing exactly what she wants you to tell her?

Be half your height or double your weight?

That’s fucked up. You gotta either have a fat dick or a small dick. Fat, fuck it.