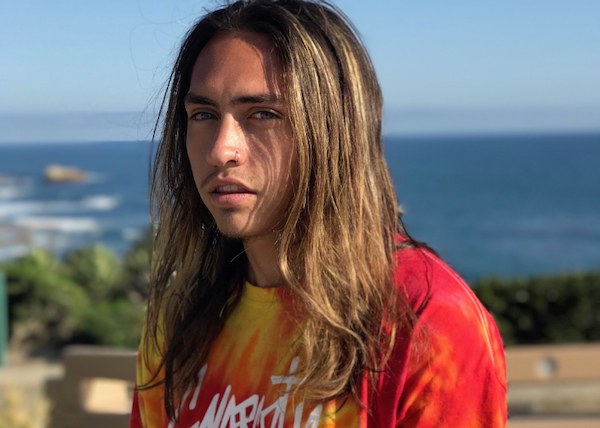 What’d you do for fun as a kid?

I always liked being outside, doing some shit. I longboarded a lot in middle school and went to a lot of hardcore shows.

How would you describe your upbringing?

My parents guided me, but basically let me figure out my own path. It was also musical, my dad works as a full time musician and he taught me music from an early age. He plays piano and he’s fire, haha.

What were some of your favorite albums as a kid?

Off the Wall and a lot of Lil Wayne & Eminem albums, but that was elementary school. My taste went all over the place after that.

Are you still in school? If not, was it a hard decision to leave?

No and no, but it was hard for my mom to get past it. In the beginning of my senior year, I decided I wasn’t going to college since I wanted to take music seriously. I did graduate high school though.

I started writing song lyrics in like 4th grade and started singing around the same time. I joined a band in 7th grade as the lead singer, and that was the first time I really showed people I could sing.
After the band, I started learning guitar so I could keep singing solo. When I was 14 I started messing around with my dad’s recording equipment and wrote some short songs, and from there I
realized I loved doing it.

When did you start releasing music and how was it received by friends, family etc.?

June 2016 I dropped my first song ‘Euphoria’ and I loved it. Everyone I showed it to was shocked that I had actually made that song. It was cool seeing people actually get excited about something I made.

How has your sound evolved over the years?

I’ve only been releasing stuff for a little over a year, but I’ve always just made any kind of music I wanted to at anytime and that’s why it’s always a different style when I drop something. I’ve never really had any genre barriers so it sounds like my style is constantly changing, but I just like making all kinds of music.

What did some of your first recordings sound like?

Funky pop stuff with guitar, bass, drums, and keyboard stuff. I used to make rap beats every once in awhile too.

What made you want to keep evolving your sound?

It was just fun for me, making something from nothing, cause I could really create something I’d never heard before. It was really fun and gratifying, that’s why I kept going.

Your music doesn’t necessarily fit a particular genre; what influenced this mixture of sounds and how’d you go about crafting your style?

Listening to so much different music and learning different styles. I feel like I found a way to genuinely express myself through music, that’s why my sound is my own. Also, having my own studio was a big factor, cause I have as much studio time as I need and I completely control the sound.

What events influenced your songs ‘Beachtown’ and ’18’?

’18’ was basically a summary of life and my mind at age 18, which was like an internal struggle over where I wanted to be in music. ‘Beachtown’ was inspired by this place in Maryland called Ocean City where everyone goes for senior week and just fucks around. It was like a nostalgic song to make, cause I wrote it almost a year after I graduated.

Skies and I linked up in Ocean City on some coolin’ shit, that was the first time we met. From there we were bros, so I came down to Pennsylvania and we put it together.

How did you learn the guitar?

Since my Dad is a musician, there were always guitars laying around. After I started singing, I started learning the guitar so I could sing and play at the same time. In high school I was in Jazz Band playing guitar, and I improved a lot from that.

Do you play any other instruments?

I play a little piano and a little bass. I mess around on the drums too.

What artists have influenced your style?

What are you working on currently?

A lot of different stuff as always. I have a lot of songs in the vault I’m planning to put together on a project. My next song dropping is called ’19,’ and that’s what I wanna call my project too.