Learn more about the infectious voice all over Young Thug’s new album. 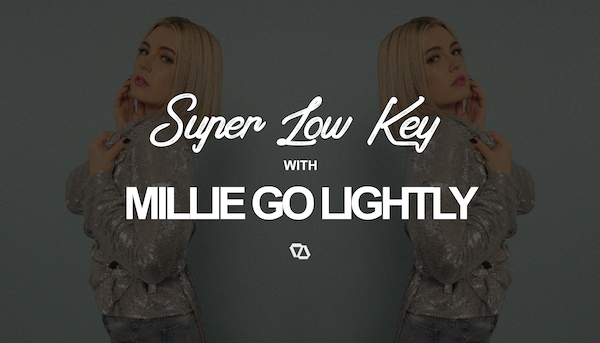 Young Thug has made countless contributions to hip-hop music over the course of the past few years. Though he’s rightfully praised for pioneering the melodic sound often found within Atlanta trap music or for being the first rapper to grace an album cover in a full dress, Thugger’s biggest gift to the music community is the introduction of Millie Go Lightly; a 23 year-old songstress from the outskirts of London, England that’s ’bout to take over the industry with her encapsulating vocals.

Millie recently found herself standing in the spotlight following the release of Young Thug’s crossover album “Beautiful Thugger Girls,” featuring on two of the projects’ first three tracks. Serving as her US debut, the critically acclaimed LP has opened countless doors for the budding superstar and thankfully put her on the radar of millions of previously unfamiliar fans in America, myself included.

I had the chance to chop it up with Millie Go Lightly via FaceTime as she worked on crafting new sounds in the studio. Read our conversation below to learn more about the rising talent.

LVTR: A lot of Americans had never heard your music prior to the Thug record. What can you tell us about your musical background?

Millie: I actually started with writing poetry. This was a long time ago, I’m talkin’ like 8 years old. I had a friend who lived next door to me, and her mom was making her learn the piano. My parents never made me properly learn an instrument, so I would go around to her house on Friday and she’d play what she had done in her lessons. We ended up writing this entire book of songs, which she still has to this day. Another girl down the street had a Mac, which at the time was like “Oh my god, what is what?!” The computer had had GarageBand, so we’d make these ridiculous songs on there as little kids.

After that point, my parents wanted me to focus on academics so I didn’t really record a lot of music. Instead I got a normal job and just started hammering emails to producers to see if any of them caught a vibe and wanted to work with me.

I had one experimental record come out in 2015 called “Power Trip” that was a dark, R&B/hip-hoppy sound. I was in school at the time dropped it right before my finals, which was totally the wrong timing. I still hadn’t really honed my sound either, so when I started working again this year I took everything down from online so I could just start fresh. I’ve always been super careful about my music because I’m such a perfectionist; I don’t want anyone to hear it unless its 100%.

Have you always been invested in hip-hop specifically?

Yes, I’ve always loved hip-hop. I grew up listening to 50 Cent and really old R&B singers like The Platters and The Drifters. I used to do street dance as a kid, so I was always listening to the Ying Yang Twins and that kind of music. I always knew that I loved hip-hop, but obviously I’m not from that world so I didn’t know how to contribute to it.

Who did you look up to in the UK scene?

Then how did you go about developing your own sound?

Just through a lot of work. I’ve been making a lot of material in the past six months so I’m really keen for that to come out as soon as possible. Like, I’ve been working literally non-stop since the Thug record came out.

Well, I’m working with a produced named Bricks at the moment, who did “Ice Melts” on the Drake album with Thug, and “Issa.” We’ve been working together in London for the past week doing a ton of records. It kinda sounds like a female version of The Weeknd, I guess.

Did Bricks link you up with Thug?

No, I actually got linked with Thug through London On the Track. When I was working a normal job, I was emailing producers I respected to see if they wanted to use my vocal or if I could write for any of their beats. He got back in touch with me, and somebody from his team passed a demo over to Thug’s team and that’s how that situation was started. It was like a one in a million shot that he’d click on my private SoundCloud link, but here we are.

That’s crazy. When did y’all meet up in person?

It was the end of last year, I was coming out to America for vacation. They told me Thug had a show in Orlando, which is where I was, so I just took a trip down there and saw a whole different side of the United States. We had a great time, I met everyone and from there we were just on a path. It took six months for us to collaborate on a song, but we were kind of in each others presence for a while if that makes sense.

People probably thought at first “How is this collab gonna work?” just because of how I am. Looking from the outside, you’d think our music is a totally opposite combination, but from early on Thug was very supportive of what I was trying to do. He told me he wanted to work, from day one. We met properly in London at Drake’s show, and that was really where we laid the foundation and were like, alright we really wanna do a song together at some point. But I didn’t know whether it was going to be in a years’ time or like the same day, you know?

Anything secrets you can tell us about your forthcoming material?

I’ve done a couple of tracks with Wheezy, and a couple with Bricks. right now, I’m just focused on making as much music as possible. I keep meeting new people, so my plan is to just keep making music with them all.