News
Nov 7, 2018
Frank Ocean announces free merch for those that prove they voted in select cities

Frank Ocean wants you to vote.

Frank Ocean is a mystery wrapped in an enigma, that much is already a foregone conclusion. Today, however, the enigmatic young artist made his intentions clear, he wants you to go vote. In a post that gives fans four locations across the United States, Ocean announces that if you show up to either Houston, Miami, Atlanta, or Dallas with proof that you cast a ballot you’re entitled to some free Frank Ocean merch.

Given the scarcity of anything Frank Ocean related, it’s a move that’s sure to draw plenty of eager fans and democracy participants nationwide. The move seems calculated in support of several key races in states and offices that have been hotly contested in recent months. Tonight’s results will have a large effect on our nation’s direction and Frank is doing everything in his power to ensure that people participate and have their voices heard, you should too. Check out the post below and see if you may be able to score some free merch. Go vote regardless though. 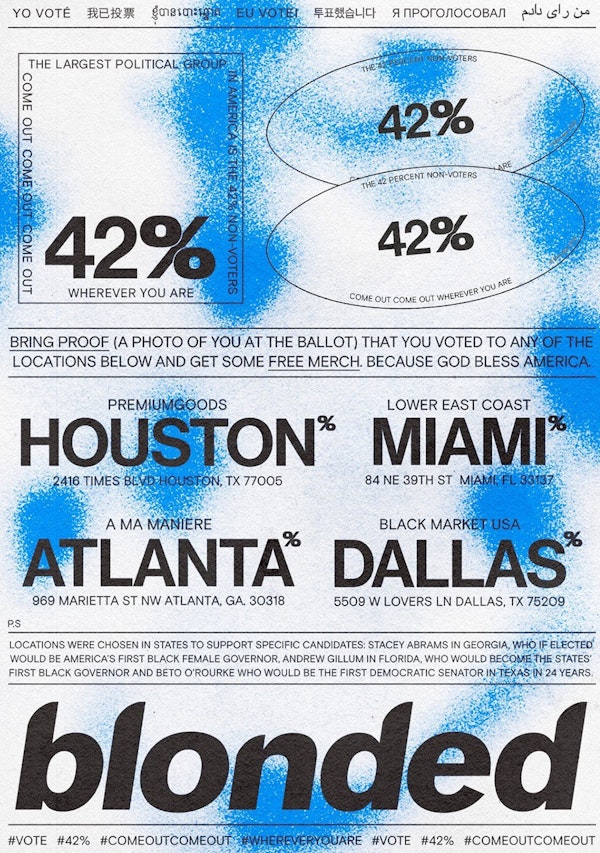