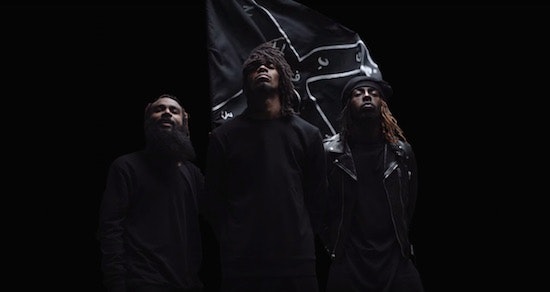 Flatbush Zombies are back with a new video for “Blacktivist,” directed by Mario Pfeifer. The video is actually part of a larger project at Ludlow 38 in New York, which you can read about below.

Video installation
MINI/Goethe-Institut Curatorial Residencies Ludlow 38 is pleased to present #blacktivist, Mario Pfeifer’s first exhibition in the United States, featuring a new video work produced by the artist and co-directed with Drew Arnold. The 4K video features the new song Blacktivist, written by Erick Arc Elliott, Meechy Darko, and Zombie Juice, who form the Flatbush ZOMBIES, a rap group based in Brooklyn. Conceived as a collaborative project, it reflects on police brutality, selective enforcement, and the right of self-defense. Scenes reminiscent of the aesthetics of conventional music videos come together with found footage, documentary shots, and 3-D animations to form a critical analysis of our times. At its core, #blacktivist asks how violence and repression are negotiated and reappraised in a supposedly post-racial society. The exhibition runs through October 25.#blacktivist aims to take a stand on current events. The title refers to “black activist on activist,” the first verse of the song by the Flatbush ZOMBIES, which is followed by ambiguous references to everyday and consumer culture in the United States. In addition to delivering critical commentaries on the world of television, the lyrics reflect about the First and Second Amendments, which protect the right to free speech, freedom of religion, as well as the right to bear arms for self-defense. In the video, the conflict between armed self-defense and escalating gun violence are juxtaposed with the meaning of images and the power of the voice. Sequences of police violence taken by surveillance and body cameras as well as mobile devices show the escalation of the conflict. In other scenes, the Flatbush ZOMBIES perform in a 3-D animated world between digital hashtags, cinematic transitions, and chroma key landscapes, while addressing current events in world politics. The narrative culminates with the rappers being reborn as pacifist freedom fighters.

The second part of the exhibition features a multi-channel video installation that analyzes the music video through documentary sequences produced at a 3-D gun manufacturing workshop in Austin, Texas. Defense Distributed is a pending non-profit corporation that in its mission statement justifies its open-source weapon designs with reference to the right of self-defense, thereby challenging the legal and economic monopoly of weapon distribution in the United States. #blacktivist is thus not (just) a music video, but a reflection on the significance mediated imagery of our society.

Mario Pfeifer (born in 1981, Dresden) lives in Berlin and New York. He studied at Städelschule, Frankfurt/Main, and at the California Institute of the Arts, Los Angeles, as a Fulbright Fellow. In 2012, Pfeifer was artist-in-residence at the ISCP, New York. He conceives his film and video works out of specific cultural situations, researches local backgrounds and weaves historic, socio-political, and documentary references into a richly layered artistic practice. Pfeifer has shown his work at MMK, Frankfurt/Main; Frankfurter Kunstverein; Weserburg, Bremen; Los Angeles County Museum of Art; Khoj, New Delhi; and Project 88, Mumbai, among others. His projectApproximation (2014-15) was featured in solo exhibitions at Museo Nacional de Bellas Artes, Santiago de Chile, and KOW, Berlin. Later this year it will be presented at Fotomuseum Winterthur and, on September 22, 7pm, at the Goethe-Institut New York.

Drew Arnold is a new media producer based in New York. His previous projects include the technical direction for Kanye West’s video BLKKK SKKKN HEAD, the creative direction for Beyonce’s performance at the United Nations, as well as her interactive billboard performance for Run The World.

The Flatbush ZOMBIES are a rap trio that formed in the Brooklyn neighborhood of Flatbush in 2010. In 2012, the group released Thug Waffle, their debut video, which was followed by the EP Clockwork Indigo two years later. This year the group collaborated with ASAP Twelvy on the single Half-Time, with Domo Genesis on Plz Don’t Make Me Do It, and with Mario Pfeifer and Drew Arnold on#blacktivist. Bolstered by a legion of fans, the Flatbush ZOMBIES perform at sold-out venues across North America and Europe.

The exhibition is made possible with the generous support of KOW, Berlin, and the video walls powered by ArtPlay, New York.