We examine some Fab’s fits.

F-A, B-O, L-O, U-S. Aside from the misspelling, Fabolous is a legendary rapper in New York and receives his due recognition from other regions. His extensive discography, clever punchlines, and ability to prosper alongside some of the best talent R&B has to offer renders Loso an indelible part of Hip-Hop.

Throughout his career, especially more recently, Fab has been known to dress well…on occasion. His outfits can be very unique, playing off of aspects of popular culture and coordinating colors in a way many wouldn’t think. Nobody is perfect though and he’s no exception when it comes to dressing. He has his hits, but he surely has struck out his fair share. We’d like to lovingly take a look at the Top 5 best fits Fabolous has thrown together, and the 5 fits that made us cringe. Most people like to start with love but we’re going go with the bad stuff first. 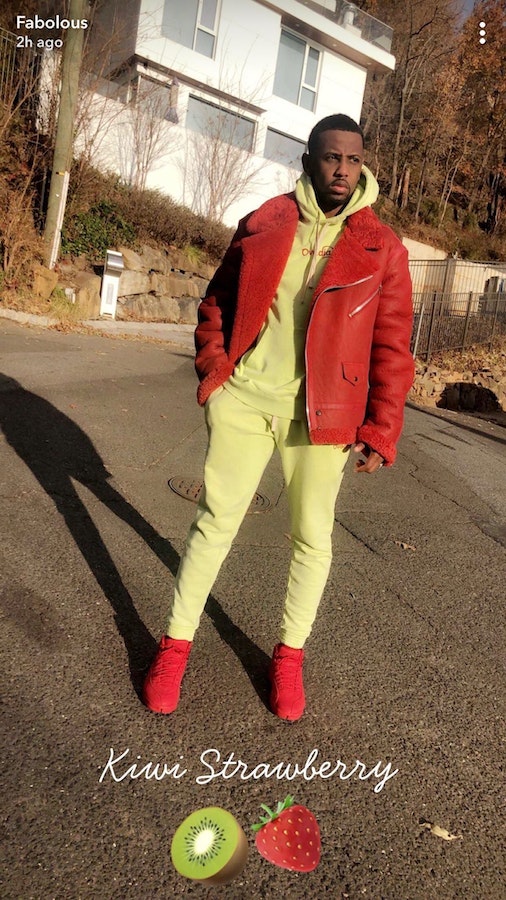 This one is pretty self explanatory. While we applaud the effort to embody fruits as health is wealth, this ain’t it. It looks like the red bag of Skittles was opened up and there are only lime green colored ones in the bag. Either he’s attempting to smize or his face indicates he too realizes he might have messed up with this one. 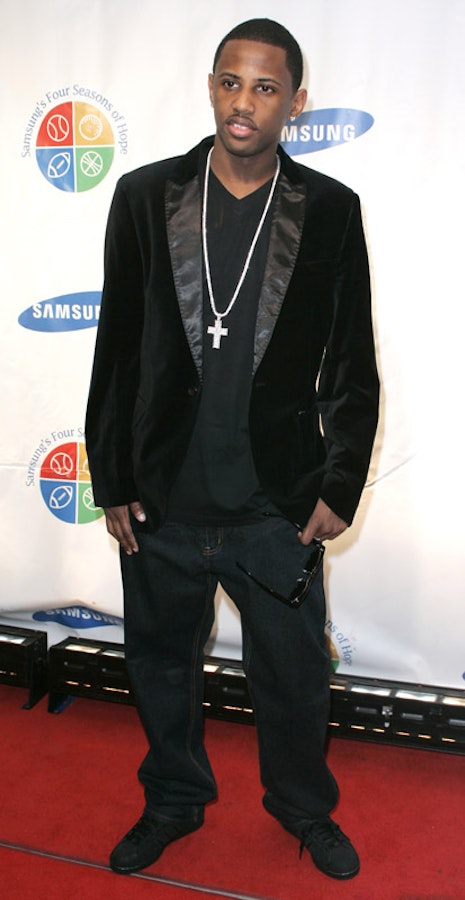 Not sure what we were thinking in the 2000’s with baggy clothing and blazers over jeans, but it was all the hype. While all black everything is usually a safe route to go, this is the type of fit your mirror should be able to alert you and say “nah don’t do that.” Had everything been fitted to his body, this could have gone quite differently. Not even an icy chain and a sharp hairline can save this. 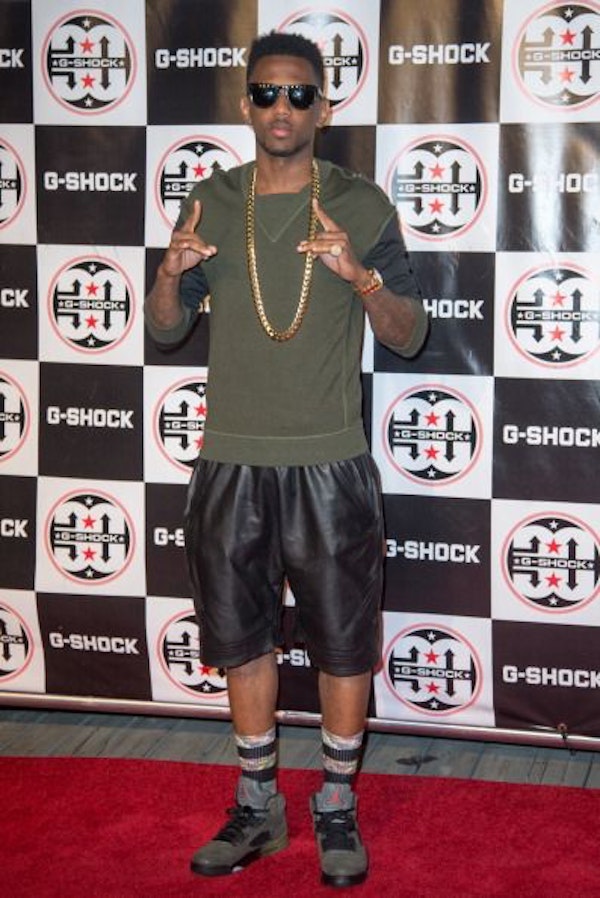 We here at Elevator applaud versatility. So Fabolous’ desire here to blend athletic wear with casual wear is celebrated, but could he not just bring some jeans with him? It’s possible he spent a bunch of money on the shorts, and nowadays the cost of something often dictates its worth in the fashion world. However, we aren’t buying it and he shouldn’t have either. There’s a time and place for everything, and even if the shorts might spark a conversation allowing him to spill how he dropped a double-double in Dyckman prior to the red carpet, there are other ways Fab. 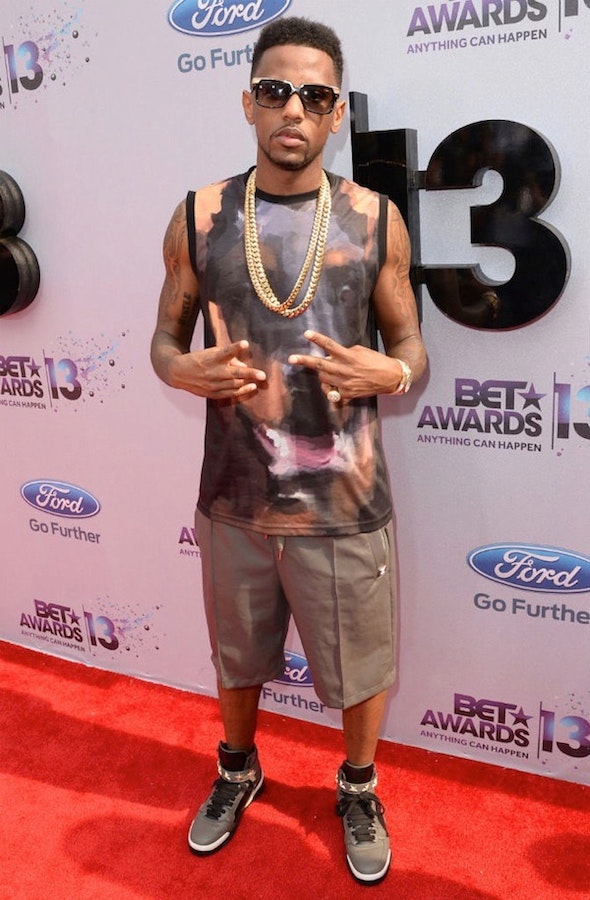 NY fellas ain’t nothing to mess with, and the dog can come out at any point whether it’s a dice game gone wrong or not enough mayonnaise on the chopped cheese. Evidently, Loso decided to literally bring the dog out at the 2013 BET Awards. No one likes to wear a suit or long clothing when it’s hot out, we get it. But like….please? The high top fade is clean and definitely makes up for this misstep. It’s possible he just loves dogs and wanted to express that, but even the love for pups doesn’t excuse you from critique. 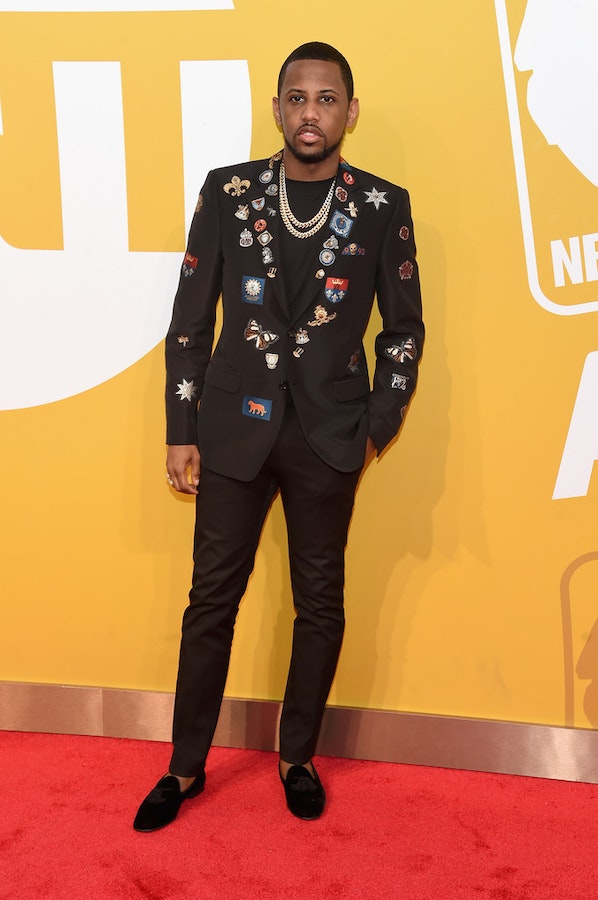 This honestly isn’t even the worst fit we’ve seen at the NBA Awards and it wouldn’t have made this list if not for all the symbols on his blazer. It’s nice to see a well-fitted suit this time around, and again the all black was safe. If you look closely, it would appear he’s sporting a New Orleans Saints logo and a Chicago Bears logo. There are a bunch of other logos that we don’t recognize, but the butterfly is cool. Otherwise, perhaps he read “NBA” too fast and confused it for “NFL.” Maybe there’s a deeper meaning, but all the logos did not help this fit at all. 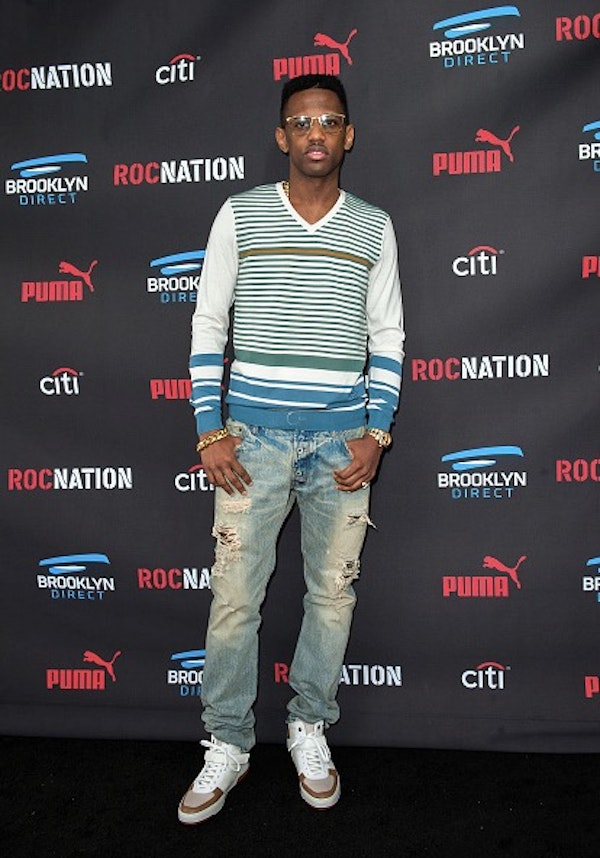 Boy, you look like an optical illusion. The sweater choice was a risk and a bad one. All the stripes are distracting and the wrong person might get nauseous. Remove the sweater or change the colors and we can talk. The sweater looks confused as to what it wants to be, and Fab’s awkward stance certainly doesn’t help. What’s up with the random brown stripe?

“This City Needs A Hero” 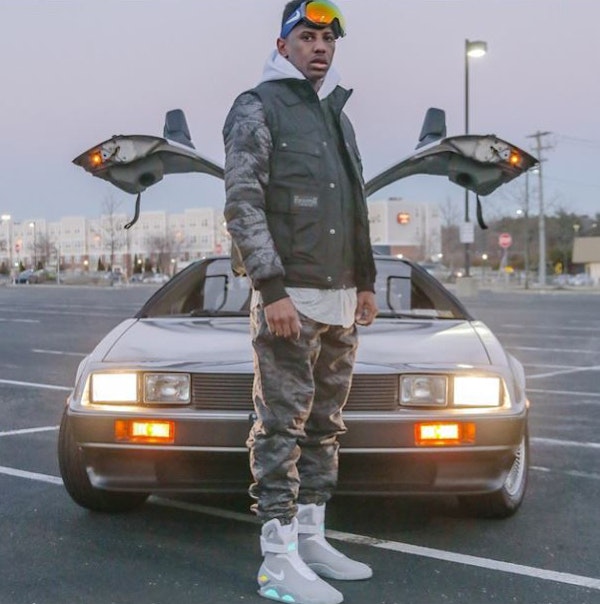 Now this is more like it. The goggles are a bit confusing as we don’t take Fab as the skiing type, but they definitely add nice flavor to the greyscale outfit. The high top kicks are fly, the camouflage pants and shirt with the black vest over it works, and the color coordination with the car is a nice touch. He looks like he pulled up to a parking lot where villains are messing with civilians and is ready to serve justice. We stan a Good Samaritan. 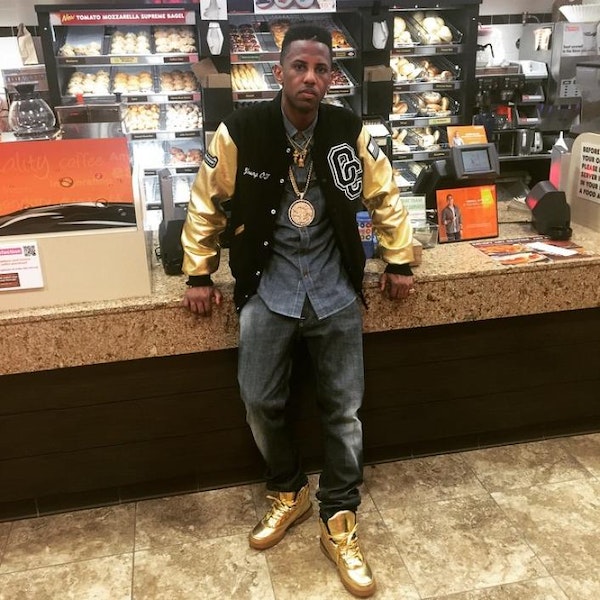 Although the jeans are a bit baggy, this outfit would make rapper Trinidad James very proud back in 2013, when his song “All Gold Everything” blew up. Fab’s got gold all in his chain, sleeves, shoes with yet another clean high top. He looks a bit angry for someone flexing the way he is in Dunkin Donuts, which only means that they likely ran out of hash browns. The fit is fire, and the combination of black and gold is always a good move. 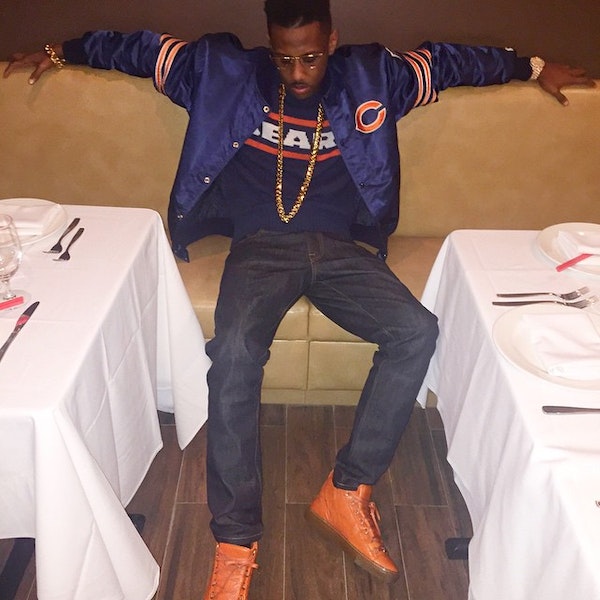 We’re calling this one Bear-y Sanders because he took this theme and ran with it the same way the Detroit Lions great outran his opponents. The Chicago Bears signature color scheme is among the cleanest in the NFL, so of course, Fabolous had to take a stab at it. We like it though, the orange shoes and dark blue jeans complement the blue and orange jacket. The Bears shirt underneath helps to make it clear what team he’s reppin’ for the moment, and the look down pose is a classic. 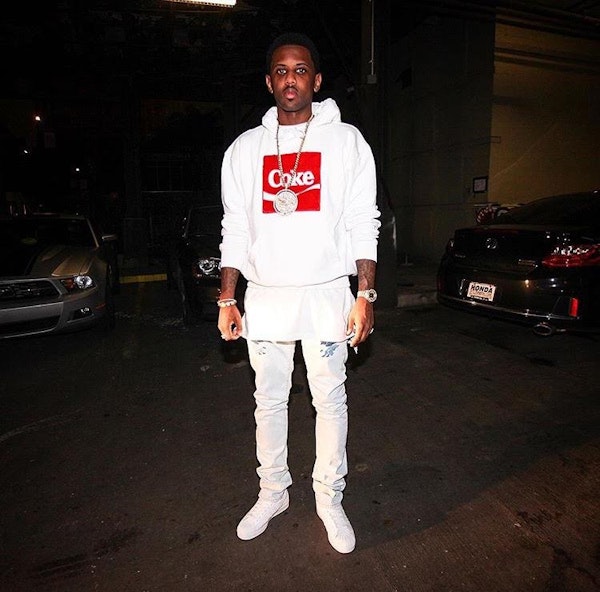 This is a risky outfit, but if pulled off without stains you can truly stand out among the rest. We’re not sure if this outfit fell before or after Labor Day, but we can bend the rules for this creativity. Everyone knows all white outfits are referred to as some variation of cocaine, but the placement of the Coca-Cola logo really brought the point home. The long shirt under the hoodie is a nice touch as well, even if the entire outfit means you’ve got to avoid messy foods and dark beverages.

“You Was in La Marina all Summer” 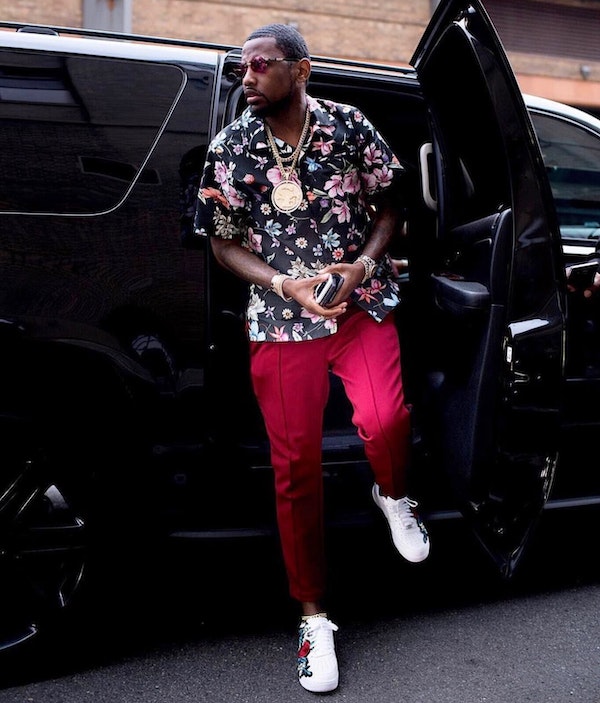 This looks like he just left a nice brunch, maybe for a friend’s birthday, and now they’re headed to get into some shenanigans afterwards at a day party or La Marina. Floral print shirts are always a vibe, the red pants pop out and show slight ankle before you get to what appears to be Air Forces with floral print on them as well. Where does he get these things? Either way, this is probably a top fit for Fab of all-time, beyond just this list. 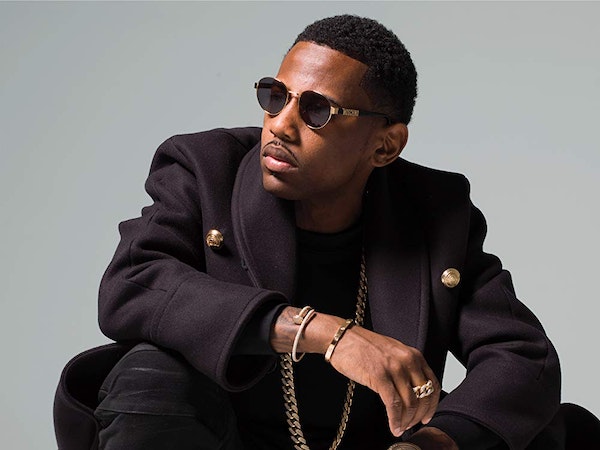 Redemption. You can take the safe all black fits and elevate them to the next level if you play it right. The jacket is clean, adorned with gold buttons and clearly contributing to his warmth as well as the drip. The shades are dope, and the jewelry is another nice touch. We can’t see the pants to know whether they’re baggy or not but his jacket sleeves aren’t dominating his arms so we’ll assume he did it right this time. Good work Fab.

What are your thoughts? Agree? Disagree? Let us know, we just hope we don’t start a Civil War amongst his fans.