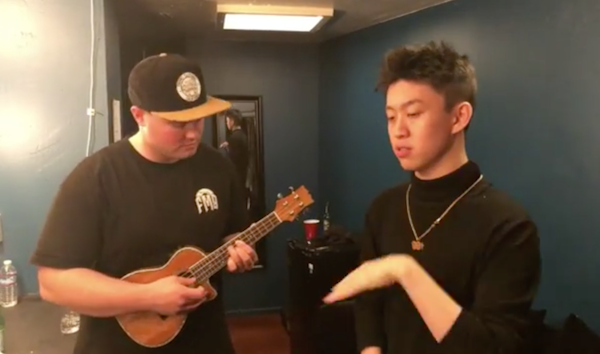 Equipped with nothing more than an iPhone X and a wood-grain Ukelele, Einer Bankz has been causing a stir by posting brief covers of rap songs on Instagram. It all started with a co-sign from Snoop Dogg, and has since turned into a lifestyle of shooting videos with some of the hip-hop world’s most recognizable names.

The Bay Area native has stripped down a handful of production-heavy bangers into one-track masterpieces, providing a unique twist on some of your favorite trap hits. Most notably, his recent “Fruit Ninja” endeavor with Lil Gnar and Germ has racked up millions of plays in just a few weeks, achieving viral status in an impressively timely manner.

“My family got me a violin at six years old,” says Bankz. “They taught me a style of playing called The Suzuki Method, where basically you hear the notes instead of reading them. From an early age, that trained by ear to be able to recognize notes and play them.”

When did you start playing the Ukelele?

Around junior high I ditched the violin because guitar was much cooler. I was playing in heavy metal and punk bands, and all that. It wasn’t until after college that I picked up a Ukelele for the first time. I was staying at this house, and there was a Ukelele case in the garage. I thought it belonged to one of the roommates, but turns out somewhere just left it there, so I took it. We were drinking, and a girl told me to cover a Snoop Dogg song. They recorded it and sure enough the next morning, Snoop had posted it on his Instagram. I was freaking out. I didn’t know what the next move was, but decided to keep going with it.

Did the covers start to gain traction immediately?

I started doing the covers a year ago, but it didn’t really gain much traction until a few months into it. I had a few big videos in my area, but didn’t get out there until I started putting out a lot of content. I didn’t have a plan but once I hit the road and started taking things seriously, things fell into place.

I have a couple camera guys. Right now, I’m in New York with my buddy Primo. We shoot everything on my iPhone X with a stabilizer. It’s always just one person filming it. The artist usually picks the song, or they’ll just start rapping and I’ll improvise over that. For this last one I did with Lil Durk, it was really on-the-spot. I had some songs in mind, but he didn’t want to do those particular ones. We eventually found some that worked for both of us, but nothing is ever really planned in advance.

How’d you come up with the Fruit Ninja concept for your video with Lil Gnar and Germ?

Lil Gnar is a super viral guy. We were at the shoot with Germ and Gnar and decided to go all-in. The song we were covering was called “Samurai Shit,” so I suggested we buy some samurai swords. Germ pulled out this axe, and we randomly found a machete at the house. We were brainstorming things to chop and Gnar’s first suggestion was Ice Cream but after thinking about it, we decided it’d probably be too physically hard to chop something frozen. Instead we pulled up to the grocery store to get more ideas and as soon as I saw the Watermelons, I knew we’d hit the jackpot.

Do you map-out routes before hitting the road?

We travel a lot. This time we flew out to New York, bought a rental and plan on hitting Jersey, Philly and Baltimore while we’re in the area. Once the covers take-off in a city, the reaction is crazy. When people see I’m in their city, I’m constantly getting requests to shoot. It’s crazy that we never really have a game plan, but it’s worked so far.

The end goal is just to create a huge network. I’m doing a lot of production stuff too, so I’d love to get a plaque for that. Would love to make a couple big hits. The more energy I put into this, the further it’ll go. I know there’s no stopping point if I just keep going. People tried to tell me “You’re gonna fall off,” but they’re the same people that hit me up months later when I’m in their city. The coolest part is seeing people that weren’t with the movement come around and want to be a part of things. I’d love to link with The Weeknd or Drake. Those would both be really cool ones.