Features
Oct 7, 2017
Eight Songs You Should Be Listening To

Add these bangers to your playlist immediately. 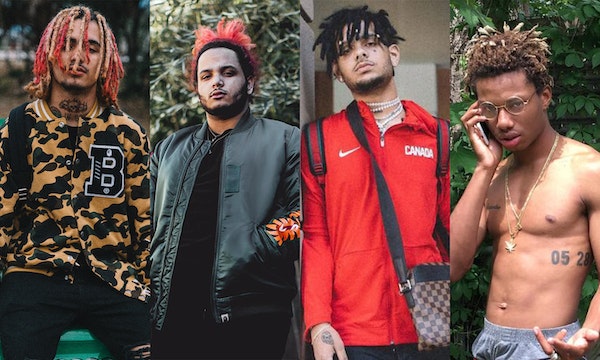 Featured as the fourth track on Lil Pump’s debut mixtape, this song is already proving to be a standout by holding a play-count superior to collabs with Gucci Mane and Chief Keef. The rambunctious South Florida teen puts forth a lethal amount of energy atop an equally dynamic instrumental courtesy of BigHead, shaping one of Pump’s most arrogantly genius records to-date.

Technically speaking, Lil 14 can rap a lot better than most of his peers; and that’s a fact. ‘Hellboy’ is featured on Trippie’s new album ‘A Love Letter To You 2,’ and does a fantastic job at proving his wide range of skills. On this track specifically, his massive vocals continue to flourish while his lyrical abilities and poignant flows are showcased as the main feature. This track will prove to be one of Trippie Redd’s biggest hits yet.

After processing ‘DEADSTAR’ for a week, it’s pretty clear that ‘Phantom’ is one of its’ most prized posessions. Purpp comes correct on the enjoyably ignorant track, as he makes his newfound wealth well-known by flexing brand names and future aspirations.

For his first release in over five months, Night Lovell channels some of his deepest emotions on ‘RIP Trust.’ The Ottowa native’s rhythmic cadence carries a haunting undertone and radiates an intimidating vibe, while simultaneously holding the appeal of his previously released records.

Duggle Bag Buru is one of Chicago’s hottest up and comers; and for completely right reason. He recently linked with Pollari for ‘Left Wrist,’ a bubbly hit that’ll blow your subwoofers if proper precautions aren’t taken. Don’t miss this track, and more importantly, don’t sleep on Buru.

TeamSESH continues their onslaught of releases with a new full-length album from BONES titled ‘Failure.’ Featured as the second track, ‘Hi-Fi’ finds the California-based rapper demolishing an instrumental courtesy of Omen XIII with chilling lyrics and a terrorizing flow.

Drayco McCoy is gearing up for the release of his new mixtape ‘8 Ton,’ and recently shared a new freebie to heighten anticipation. ‘Trap Neva Closed’ is an instant classic, as the Naptown emcee comes to battle with his signature gritty flow and raunchy lyrical style.

On his latest drop, Nessly takes us on a ‘Shopping Spree’ with TM88. The Atlanta rapper continues to impress with creative lyrics and a distinctive vocal tone, as he gears up for his major label debut in the coming months. Don’t miss this new freestyle, you’ll have it on repeat all night.