Drake & Future – What A Time To Be Alive (Review) 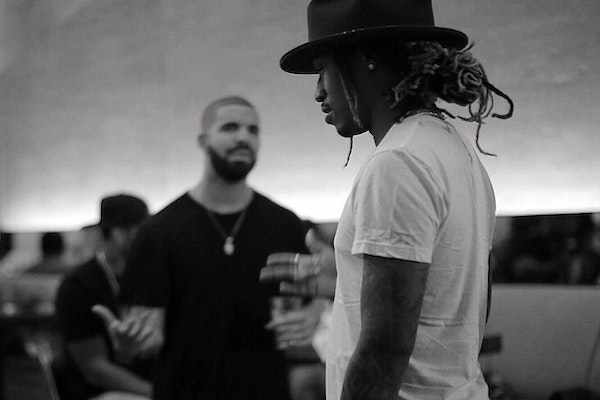 [Yerboi has listened to this album 5 times. Through 5 listens, these are my feelings. I always reserve the right to tell you at a bar 3 years from now I changed my mind about an album, because music grows on you (or grows old) and that’s just the way it is.]

What A Time To Be Alive, indeed. A time in music where 2 artists in the prime of their career get in the studio, make an album in a week and sell over 300,000 copies off the strength, no single. Didn’t seem possible even a few years ago. Where’s Lars Ulrich? Where’s Bono? See guys, you don’t have to sue us or sneak your way into our iTunes libraries, you just have to know what the customer wants and give it to them. People still want to support their favorite artists, and that’s great to see, but this isn’t about the sales.

Drake and Future made a great album and should be applauded for it. It’s really, really good. Quotables for days, the project is sure to have real estate in our brains for a while. That’s why I’m so torn on WATTBA, to keep it 8 more than 92 with you. I’m suspicious of the whole situation, like what is this music? Metro Boomin produced almost every single song. If that sounded negative, it wasn’t. He crushed it and earned the fuck out of that Executive Producer credit. It just leads me to believe this was mostly preexisting Future music that Drizzy came in and added features to, which isn’t even necessarily that bad. I’m nitpicking, feel me? It’s like when the fans of a 13-3 football team call into talk radio worried about their backup Quarterback. Drake and Future have earned their respective statuses in the game over relatively long careers (compared to peers in their “lane”) with an even longer list of hits. Neither of them needed this, right? Wasn’t it all just for fun and diamond emojis?

It’s hard to put a finger on it, but it feels weird. I think Drake and Future work together on paper, and most definitely on tour. When they sprinkle features on each other’s projects here and there it works because they couldn’t have more opposite styles. Even though they’ve both embraced the melodic takeover (and arguably ushered it in) they occupy very different spaces in the game. That plays well on individual songs, but is difficult to maintain over an entire 11-song album. Some of the tracks find Drake awkwardly trying to add his take on to what seems like an otherwise complete song. Having said that, Aubrey makes it work and has the inate ability to turn any song into a possible smash, so who knows? For me personally, WATTBA felt a little rushed and maybe disingenuous compared to IYRTITL and DS2.

It’s definitely not Watch The Throne. Please stop comparing the two. Hov and Ye spent a considerable amount of time crafting a project that ultimately felt cohesive, planned and timeless. I’m not sure this project as a whole will stand the test of time like either artist’s other most recent work. Only time will tell if individual songs make that next level type of impact. As I’m looking back through my notes, I loved certain things about all the songs. They’re all good, it’s just not the greatness we’ve stupidly become accustomed to. The title itself is another reason the album is giving me mixed emotions. All of my above review could be scrapped and replaced with the theory that this album is a mere victory lap. What A Time To Be Alive. After their respective efforts on IYRTITL and DS2, why not just get together and throw something out there for the people. Listen to me complaining about it when if these two didn’t drop it, we all would have asked them to for years. Shit, I’m sorry Drake and Future. To quote Drizzy on “Diamonds Dancing”… ungrateful.

Here are my track-by-track thoughts:

Digital Dash – Metro said Future and Drake were having dance-offs to this one. I believe him. Metro murders this beat, trading in outer space synths for keys halfway through Future’s verse and then back, it’s subtle but brings the whole thing together and sets the tone for the whole album. The Drake line about Gucci? Tru.

Big Rings – HARD. Young Metrox3 with the steel drum that’ll be heard all season long in every lockerroom  nationwide. Drake spazzed, then Future comes in with the What A Time To Be Alive moniker and just shuts shit down. Bringing the beat back at the end is a power move.

Live From The Gutter – This is Future at his best, but it was the first time on the album Drake felt maybe a little out of place. Not that Drake didn’t have a decent verse, as that’s almost never the problem, just thematically it was a reach. When I say that parts of the album feel as if this was a Future album that Drake came in and celeb-shotted, this is an example. Drake doesn’t make an appearance till the song is nearly over, and he comes on a gloomy song about the gutter immediately talking about fixing things with his money and dipping. I don’t know, it just didn’t feel like a great fit. Having said that, I reserve the right to sing every word of said song while driving around bumping it.

Diamonds Dancing – I get that the album was only made in 6 days… but this song needs Beyonce or Rihanna on it, STAT. Bey would fuck this song up. Drake redeems himself quickly here, as this song is clearly in his wheelhouse. Future surprised me here, there’s a couple choice points on the album where he goes full falsetto and I run it back every time. Next level.

Scholarships – To me, this is the best song on the album. I don’t know if it’s even close. It encapsulates the mood of the album, while also giving us both respective artists at their absolute best. It’s haunting in the beginning, Future almost apologizing for balling out of control and moving on from… someone. Mentally, none of that shit can phase me. Mentally, none of that shit can phase me. Drake comes in after the hook, drawing you in before switching up his melody and giving you chills (don’t lie) with the “I rock Kentucky blue on these hoes…” line.

Plastic Bag – It’s forthcoming strip club success notwithstanding, this should be a smash away from the pole too. This is basically what I was expecting from this album. Neither artist is necessarily breaking new ground here, but it’s a pretty good song.

I’m the Plug – Fuck a humblebrag when you’re really the plug. No really, he’s the plug. Like, really. Future, we know you the plug. Drake scrolled back through his notes from a DJ Khaled posse cut session for his verse here, as it felt copy-and-pasted in and ehhh.

Change Locations – One of my favorites on the album, this one will definitely stand the test of time. Like Scholarships, both artists find a pocket they’re comfortable in and crush it. Future and Drake’s voices contrast so well on this song, with both masterfully rapping their verses while also singing them. If you can make a song where either a car full of girls OR guys will all be singing along? It’s lit.

Jumpman – I just want to know if this was part of Drake’s deal with Jordan, I don’t like sneaky product placement. Like MJ said, “Fine, I’ll give you the extra $5 million and your own shoe, but I need a Jordan anthem.” Regardless, this shit bangs and will give “Big Rings” a run for it’s money among athletes. Metro Boomin on production, wow. At this point, it’s like yeah, wooooo another Metro beat, but this album is his crowning achievement. He’s 22.

Jersey – This song is just Future, the only one like it on the album. Honestly, I would’ve traded that Drake verse on “Gutter” for one on here. That’s nitpicking though, this song is great. I wonder if it was cut from DS2, sort of feels like that vibe. You do what you want when you popping.

30 For 30 Freestyle – A view from the 6, this album closer is just Drake and feels like a trailer. He tells Meek he has bigger shit to worry about than their beef, maybe a sign that he’s moving on from the matter. Nope, he goes back to Meek to let him know he was disappointed in him and his team for how they handled the situation. Ouch. Everybody knows the only thing worse than your dad being mad at you is if he’s disappointed. You fucked up, kid.