Check out Phony Ppl’s in depth interview and personalized playlist on this month’s installment of Don’t Play Yourself.

Originally founded in 2008, Brooklyn based quintet, Phony Ppl, have thoroughly changed the landscape of what it means to align with a specific genre over time and it definitely shows. From touching the realms of hip hop, R&B, soul & rock, the group has continued to ascend to incredible heights by being extremely in touch with their underlying purposes as musicians and as a people, both individually and in their partnership. Comprised of 5 members, we have Elbee Thrie as lead vocalist, Elijah Rawk on lead guitar, Matt Byas on drums, Aja Grant as their keyboardist, and Bari Bass on bass guitar. 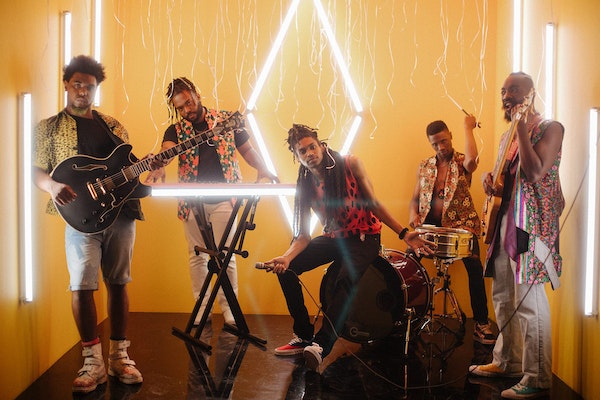 Back in 2015, we received a truly beautiful gift, an album titled Yesterday’s Tomorrow, which peaked at #24 on Billboard’s Heatseekers chart and #6 on iTunes R&B chart. This segment in their careers introduced a newly refined sound that spoke volumes to listeners on a global scale, with comments from The New York Times mentioning their “forward-thinking”, NPR calling them as “brilliant”, & even Rolling Stone adding them to the year’s 15 greatest. Rightfully earning their title as critically acclaimed, you could only imagine how intense the anticipation for their most recent album, Mō’zā-ik, was— an art piece which highlights how genuinely expressive each track is, both sonically and visually being that their music naturally makes you feel and see what exactly it is that they are communicating. Personally, I view each song on the album as it’s own independent entity, embracing vibrant storytelling and emotion—then all piecing it together into a mural of emotional and spiritual passion bonded with true authenticity.

I had the opportunity of being able to catch up with them in the midst of all the busyness for a brief yet very in-depth interview. Elbee Thrie and Matt Byas were recording in the studio during this time however, Bari Bass, Aja Grant, & Elijah Hawk were more than capable of holding it down over the phone. Our conversation came very organic, full of laughs and originality. For this installment, we, collectively, were able to put together a personalized playlist consisting of 6 songs—showcasing what they are currently listening to at the moment.

From an emotional & spiritual standpoint, where were each of you in your lives when the album Mō’zā-ik was created and brought to existence?

Elijah Rawk: I would say that Phony Ppl as a collective definitely entered a new chapter. We were reaching an entirely new place because we had already passed this sense of doubt that we had with our last album Yesterday’s Tomorrow—whether we could do it just the 5 of us. Getting to this point, we started touring a bit more, we have more people listening to our music globally; so I think there was some precaution that we had, like embarking on new territory. We had just signed a deal with the label, 300 Entertainment, we were touring with another artist so I think there was definitely some anxiety. Although generally, we knew that we at least had enough content. Like 30 songs. I feel we were all in a place of excitement, taking on this new chapter of our lives.

How would you say you all have grown as musicians and as your individual selves at this point?

Aja Grant: Wow, it’s so much. For starters, most of us have moved out of our parents’ house since then so the freedoms and the non-freedoms definitely play a significant factor in how we create music and who we are as people. That definitely reflects in the maturity of the music as well. Also, playing the Blue Note shows and how people have responded to our music spoke to us. We still have songs we made from that time period. Now, I would consider our songs more seasoned—“SomethinG About Your Love” for instance. That’s a song that Elbee had made a long time ago, and it’s made its way onto the stage, to the studio and now it’s on the album. We’ve really just grown in so many different areas.

How would you say that your personalities as a group differ and mesh?

Elijah Rawk: It’s not that big of a pull. Aja and Bari, you guys are brothers so there are a lot of similarities between the two of them that I’ve always noticed. Though, obviously, they think differently as well since the two of them are very different people at the same time. Our personalities overall I feel are very complimentary. I think that for every extreme in this band there’s probably a counter on the other side. There’s a big spectrum of full creative expressiveness and full practicality and pragmatism and also always a devil’s advocate in our band for whatever idea that any one of us has. That is only to make sure all angles are covered. We try to all look out for each other always so generally there’s always a lot of up and down. For example, I know sometimes I’ve been the only one who is super talkative and jumpy while everyone is calm and quiet. I’ve also been the super quiet and reserved one in the back while everyone else is jumping around. I feel we’ve all known each other for so long that there is a big give and take, like a huge yin-yang situation going on here.

Aja Grant: There’s always someone too who might not be having the best day but then there’s one or two of us who compensate for that. Whether it’s in a studio setting, a photo shoot, on stage, etc. It’s really nice to be able to have and maintain that balance.

How does it feel to be a successful, black group still playing live instruments on stage in this generation?

Elijah Rawk: Honestly, it’s bizarre because all of us grew up definitely knowing of a lot of bands. The fact that we’ve got to this point now where there aren’t as many is pretty surreal. We ultimately just proved that we weren’t insane by sticking together this long and staying tight through it all. It’s really cool to have a smaller lane and within the lane, to be such fans ourselves and friends to the other people who are in it—for example, The Internet. It’s a really nice space to reside in.

Who would you all say is the best at Super Smash Bros. & Mario Kart on Switch?

Elijah Rawk: I think we can all agree collectively that Matthew is easily the best at Mario Kart and Super Smash Bros player amongst all of us. BUT, all of us have beat him so know that.

Aja Grant: We’ve all got a couple creds up in there, for sure.

Elijah Rawk: He’ll challenge anyone who challenges us, it could be people on the street, no matter where we are.

Bari Bass: For instance, when we were all on the AMTRAK coming from Washington D.C. and these two people were playing: Matthew’s like “Oh, they’re playing Smash? Lemme get up in there.” They did challenge him though.

What 6 songs do you all have on your radar right now?

Elijah Rawk: I would like to say I really much enjoy “Bleed It” by Blueface currently. What I like about the song: I feel this across the board with any artist that I’m a fan of. I like the originality. I like when people are not afraid to break away from norms and conventions and make music they want to listen to themselves. I feel like that is the kind of music he makes. I think people criticize his flow but it’s not like anything we’ve seen or heard before. We’ve heard E-40, Suga Free and etc. Blueface really just makes fun music. I would actually like to be at a concert and Blue Face is playing. I think sometimes music should just be fun and you shouldn’t have to think about it a lot.

Aja Grant: I would like to choose Matty who is one of the musicians from the group BADBADNOTGOOD. He has a song titled “Verocai”. I love this song because I’m a big fan of songs that are constant. It’s very texturized with strings, piano, & horns. It feels much like an old Brazilian record. I really just love warm textures and large, colorful compositions. Really one of my favorite songs right now.

Bari Bass: My song right now that I’m listening to is titled “Cuffed” by Nick Hakim. Actually, the whole Green Twins album is crazy. I love this song in particular for the reason that I’m intrigued by the way it continues to build and build then towards the end, it smooths out. It’s a smooth, yet powerful R&B love song.

Elijah Rawk: My next song is from none other than my boy Braxton Cook. The song is titled “No Doubt”. The reason I love this track is that I very much enjoy him as a person, he’s truly amazing and an even better saxophone player. I just started listening to his album recently, and I really love every part of it. Shout out to Braxton.

Aja Grant: My next one is “Big Brown Eyes” by Benny Sings. This song is kind of like you can feel the studio room they recorded in. Being our keyboardist, I’m also a sucker for piano sounds that are slightly out of tune. They really nailed all of the textures. It feels much like a disco record. I love the lyrics and how it brings a nostalgic feel.

Bari Bass: I don’t listen to rap all that crazy but this song is way too tough to not include. “KANGA” by 6ix9ine That song is just way too insane. I don’t even know what else to say about it—it’s just pure energy. Brooklyn. 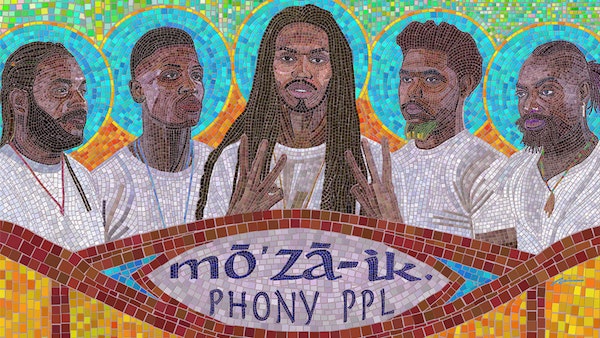 Finally, Mō’zā-ik truly is one of those albums that take you to a place of refuge, a place where therein lies another world. A place to decompress, take the weight off while instinctively transcending the conscious mind.

Press play on Mō’zā-ik below: