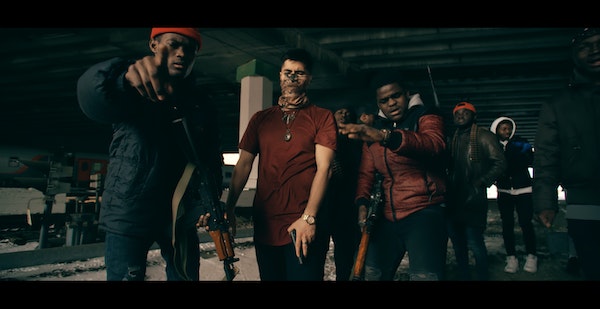 As spoken on before, authenticity in life is important, but in Hip-Hop, it’s vital. No matter what you speak about, if it’s real, people will grasp on to it, clamoring for even a bit of relatability. Or, they’re trying to live vicariously through you, and for rising Dubai native, Nuckles and his roughneck lifestyle, the latter is definitely the case. Showcasing some of that lifestyle on display, he unveils his new video for, “MY SQUAD”.

Taking place in Nuckles current home of Russia, the video for “MY SQUAD” literally looks like a commercial for a militia, as Nuckles and his crew roam around Russian streets, and deserted warehouses, sporting some of the heaviest artillery that I’ve seen in a music video. Considering the fact that the rest of the world isn’t as lax on guns as we are, the feat is pretty daring and ultimately incredible to watch.

As for the record, you can immediately spot the Drill influence that’s Nuckles has had on his music. Utilizing minimal lyricism, and instead opting for a style more conducive to being able to chant the lyrics, the song requires you to give more energy, naturally bringing out the thug in all of us as we watch Nuckles truly live it.

Press play on the video below and get hip to one of Europe’s rising artists.