Charting: The Top Five Uploads of the Week

Here are the five most popular uploads of the week on our channel. 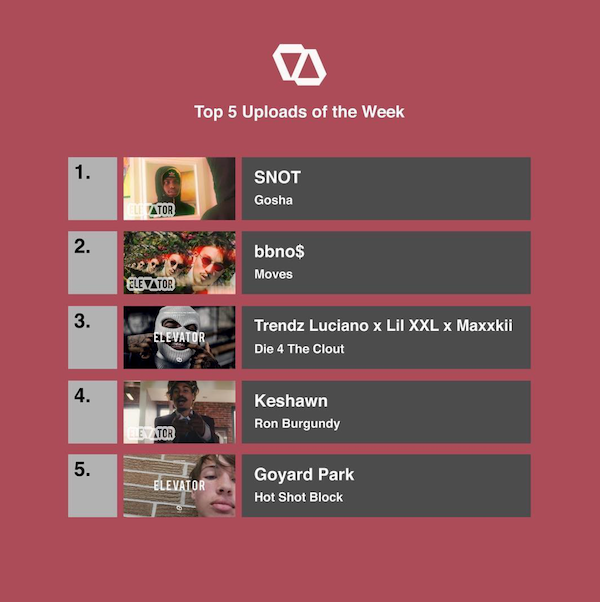 In an effort to keep our readers up-to-date with what’s happening on our YouTube channel, we’ve decided to throw together a weekly write-up of the hottest uploads. From the nine videos that we dropped over the past seven days, here are the five that led the chart:

$NOT‘s “GOSHA” is that song in the underground right now. With the official audio combined with the audio for his other recent hit “Drip” amassing over 100k views on our channel, it was a no-brainer that we had to premiere the Holy Manny-directed visuals. Throughout the video, the Florida native spits devastating, monotone flows and always stays posted with his hood zipped like Kenny from South Park.

bbno$ continues this week’s trend of incredible uploads with his visual for “Moves”. The lentra-produced track is unquestionably infectious itself, but pair it with an intensely hued video from Shiraz and you have a masterpiece in all aspects. His unconventional flows and choice of instrumental are matched by an equally eccentric outfit, giving evidence to the argument that he is not a hip-hop or pop artist, but instead lands in a genre of his own.

“I put some bands in it, that’s investments // Why your bitch stink? She need some breath mints”

Third place comes as a collaboration between Maxxkii, Trendz Luciano, and Lil XXL. Built upon a devious guitar sample, the booming record provides a critique of clout demons that play the game for the wrong reasons. While there’s currently an abundance of fugazzi in the music industry, this artistic combination exudes authenticity.

“Fame and the clout, That what you bout? That what you vouch? Put in a pouch // Stuck through the drought, My traphouse was out, Left me with a doubt, I want that house”

Keshawn recently blessed our pages with his humorous video for “Ron Burgundy”, and in only five days it’s already nearing 13k views. The visual, directed by Taj King, pays homage to the legendary anchorman with comical skits and Will Ferrell inspired apparel. As hilarious as the idea may be, Keshawn is no joke and will undoubtedly continue his ascent with every future release.

“Diamonds so cold, That I’m changing the temp, When I’m making it rain, Man I feel like Ron Burgundy”

At only 16 years old, Goyard Park has the time and tools to propel himself into stardom before he’s legally an adult. His self-produced track “Goyard Park” is effortlessly catchy, with auto-tuned hooks and the energy of a youthful spirit. That being said, it’s only a small preview of what’s to come for the young Tampa native.

“Living life like a movie, Shawty she a groupie // Grinding on my ‘subis, Pull up and now we moving”