Charting: The Five Most Popular Uploads of the Week

Take a deeper dive on the five most popular uploads from our channel in our new signature series, “Charting”. 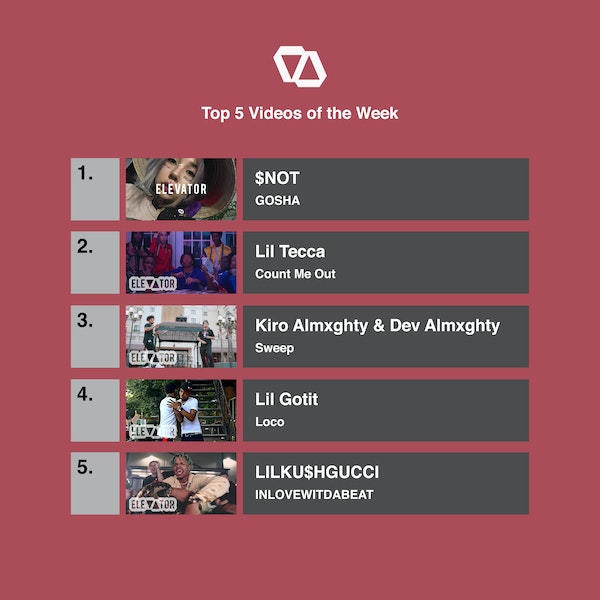 In less than a month, $not‘s “GOSHA” is already nearing the 500k mark on SoundCloud, so it was no question that the prospering track was going to explode on our channel. The Lake Worth native’s laid-back, yet lethal flow put the YZ-produced beat deep in the Florida earth with references to Mortal Combat and trend-setting Russian clothing brands. All our bets are on $not to takeover, and yours should be to.

It’s 2018, being “too young” is no longer an excuse for lacking a hit song. 15 year-old Lil Tecca backs up this argument with his latest video for “Count  Me Out”, an infectious party anthem that will have every high schooler in Queens either loving Tecca or wishing they were him. Already having expensive watches, wads of money, and a loyal crew, life doesn’t seem that bad for Tecca, and it’s only getting better from here.

Our third most popular video finds Texas rap affiliates Kiro Almxghty and Dev Almxghty teaming up for a trap-inspired hit entitled “Sweep”, with accompanying visuals directed by DavieDavee.  Some things never change, and one thing likely won’t is our love for Southern rap. Combine a catchy piano sample with hard-hitting drums, two emcees with undeniable chemistry, and a fire video edit (from Waxbando), and you have a recipe for success.

“Walk in the bank and I’m smelling like strong, what you got on? Kush and cologne // Need every dollar, Know I’m all bout my chips, I know some ni**as really taking them trips”

Atlanta is always churning out a large number of promising rappers, but Lil Gotit is undeniably one of the hottest seizing the spotlight currently. He’s managed to build on the sonic themes that have helped drive many A-Town artists from local buzz to international stardom, yet his own take on the classic sound can’t be compared to contemporaries. The Be El Be-directed visuals for “Loco” have been lighting up our channel, and we recommend you peep them immediately.

St. Petersburg, Florida native LILKU$HGUCCI has effortlessly built a growing buzz by releasing a mixture of impressive original works and remixing timeless records. He recently hopped on an old Playboi Carti beat for the creation of “INLOVEWITDABEAT”, an energetic record with an equally-captivating video to match. Directed by Mojiwilson, the visuals find Lil Gucci whipping around in a coupe and getting hyped with his crew.

“I just jumped off of the porch, Up in the Porsche, Smoking a port”