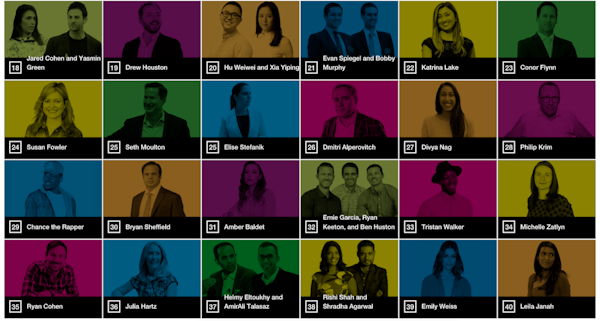 After winning three Grammys & proving to be one of the most charitable celebrities in the world, Chance The Rapper can tack another massive accomplishment onto his list for 2017. The 24-year-old Chicago native was recently featured on the Forbes ‘40 Under 40‘ list, making him one of the “most influential young people in business.”

Appearing alongside names like Mark Zuckerberg, Kevin Hart, Serena Williams & more, Chance is officially the youngest person to ever appear on the prestigious list. Landing the respectable #29 spot, Forbes added a brief profile to justify his placement, saying:

“The Chicago native has been subverting the music industry’s traditional business model since he was a teenager, declining to sign with a major label and instead releasing his own streaming-only mixtapes, featuring unique strains of hip-hop splashed with sunny spirituality. Last year, he won the first-ever Grammys (three of them) for a streaming-only album and received $500,000 to debut the tracks exclusively on Apple Music. He’s also a celeb endorser for Nestle, Nike, and even Twitter. Up next: He’s set to star in the movie Slice as a pizza-delivery driver/werewolf.” – via Forbes