Chuck and Mikey are as cool as ever. 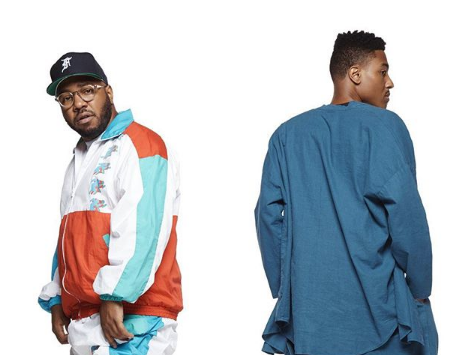 Chuck Inglish and Sir Michael Rocks, also known as The Cool Kids, are the most aptly-named duo in music. Since the beginning of their careers as a duo, they single-handedly (dual-handedly?) rejuvenated hip hop fashion with their bright, retro-inspired looks. Combine that with their selection of vibrant, off-kilter beats and slick 90s-inspired rhymes and they quickly became staples in the underground scene.

Their combination of old-school cool and new-school energy truly defined an era. Shortly after the release of their debut album When Fish Ride Bicycles in 2011 the duo took a hiatus to focus on solo endeavors until one fateful summer day in 2016 when they announced their reunion.

Here we are in 2017, and just like that, the Midwestern duo just dropped their sophomore album Special Edition Grandmaster Deluxe. Once again they find themselves in perfect sync combining their signature quirks to make a album that’s fit for all seasons. Not only is the duo in peak form but SEGMD is one of the funnest releases of the year.

Oftentimes, reunions fail to reproduce the magic of the original product but not only do The Cool Kids avoid the sophomore slump they break the curse of the reunion album as well. In light of their impressive new album coming off of an extended hiatus, we had to chop it up them. We got a chance to hit up the guys and ask a few questions about their hiatus, creating the new album, their influence on fashion and their overall growth.

What do you think you gained from working as solo artists that you brought to the new album?

We are always learning and always expanding but the ideas on that we had on the album is just a continuation of our natural growth as artists.  Whether we were making music together or on our own these sounds and songs have always been inside us and we think show our natural maturation as artists.  If you aren’t growing and expanding as an artist over time you might as well quit.

What was that first studio session for Special Edition Grandmaster Deluxe like? Was there any awkwardness or rust?

We sent ideas back and forth to each other but we spent several days at Flatback Studios in the middle of nowhere Iowa.  No one around, no one to bug us, no one to distract us.  It was perfect to get back into the groove.  We created 4 songs that we wound up releasing or that became part of the album from that secluded session.  There was zero rust or awkwardness.  Keep in mind we never really were separated from each other.  We always kept in touch and appeared on each other’s solo projects.  Getting back into a studio together just felt like the natural next step.  To us, this was the first time we were working together without limitations or expectations.  We look at SEGMD as our first true project.

What was the first song that you made for the album?

What’s your favorite track from the new album?

All of them (obviously).

Did you record the whole album alongside one another? What is a typical studio session with the Cool Kids like?

Combination.  We would usually be in the same room but not always working on the same thing.  Chuck would create something hot.  Mikey would write some bars and hook, and then Chuck would come up with his own spin.  Our features would come through from time to time.  Usually there is a lot of clowning and hilarity that takes place whenever we are together.  That’s where the Shit Show came from.  We wind up punking each other or getting into random characters just to make the other one laugh.

What made you feel like it was time for the Cool Kids to return?

The time was just right.  Everything going on with Trump to kids getting killed by cops to walls being built to just the overall state of music just made it clear that the we should bring it back.

What are you on now fashion-wise?

What elements of style do you think the Cool Kids brought to brought back to the game?

Not that we brought anything back.  What we were into 10 years ago is what everyone is into now.

What did you do to get inspired for a new Cool Kids album? Did you do anything different from recording your solo work?

No inspiration needed.  This music lives inside of us at all times.  We just needed the time to be right and a little bit of time together to create.

Special Edition Grandmaster Deluxe is available now on all streaming platforms. Check out our review of their stellar album here.