…and they’re all better than “Green & Purple.” 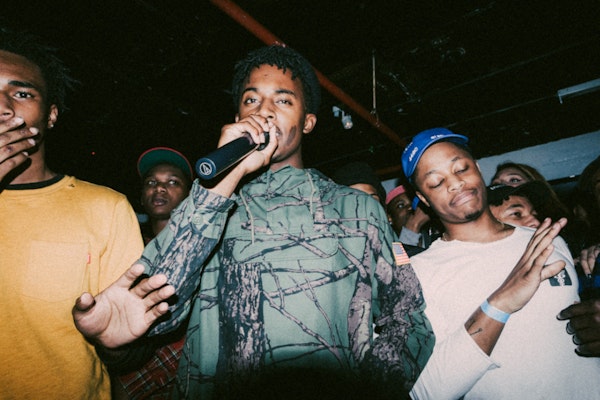 Weeks after finally releasing his highly anticipated debut, Atlanta born rapper Playboi Carti has been hitting the mainstream harder than anyone could’ve imagined. “Magnolia” is hitting airwaves across the nation, the streaming numbers on his mixtape are insane, and the coveted Drake cosign was recently attained when the 6 God brought out the 20 year-old at a concert in New York.

Since creating so much buzz, Carti has quickly been one of the most sought after features in rap music. ASAP Rocky and Travi$ Scott recently tapped the youngin’ for two tracks in “Raf” and “Green & Purple,” which were wholly underwhelming efforts in comparison to Playboi Carti’s colossal catalog of features.

I’ve included 20 pieces of evidence in support of this bold claim. Keep reading below and enjoy a handful of Playboi Carti’s most enjoyable guest appearances – all better than “Green & Purple.”

Possibly the greatest collaboration in recently memory. This was one of the first times I really started thinking Carti would take shit to the next level, clearly outshining both Rich the Kid and Kodak on the track (though they both came extremely hard). Plus, the visuals were among some of the first we saw from the Atlanta rapper, and further proved his star potential (I mean, c’mon, his verse overshadowed a cameo from Sean Kingston). “Plug” is a timeless record and will be racking up plays for years to come. If you haven’t heard this song, seriously start trying harder.

One of the best tracks off of Lil Uzi Vert’s “The Perfect LUV Tape,” this joint with Offset and Carti absolutely bangs. Combining their iconic flows over a set of production from Maaly Raw, “We Ghetto Flowers” is a perfect example of a prime Carti feature.

There are a few tracks with Etheral on this list, and for right reason. This is one of the more popular of the cuts, with the remix banging even harder. Listen to the chilled-out track below and light one up.

Iconic. Just fuckin’ iconic. Lil Uzi Vert and Playboi Carti dropped this joint ahead of their co-headlining tour in 2016 and shook the world. This goes too hard, see for yourself.

Not sure if this is technically a feature, but fuck it. Rich The Kid and Carti came together for another boomin’ effort on this one. Carti’s hook is infectious and both rappers absolutely spazz on the verses. So dope.

My personal favorite track and one of the most slept on. Linking up with Canadian artist Ram Riddlz, Carti fuckin’ murks it on this track. I also really dig Ram’s portion and hope he continues to explore this sound on future releases.

This shit is addictive. Joey Fatts grabbed the perfect beat for Carti to spit on, and he straight-up demolished it. One of the first times Carti really impressed me as a rapper was on this track and it’s probably one of the most straightforward, bar-for-bar verses you’ll get from him.

This joint will always go. Plu20 Nash drew up a crazy blueprint for the first Cozy Tapes single, and all featured artists absolutely wrecked it. Yung Gleesh delivers a monumental verse and Carti finally gets some big mainstream shine. Peep this banger below.

Maxo and Carti always crank out heat. This is another solid group effort, and was on my daily playlist for months. Another piece of timeless music here, paying homage to the legendary movie director. Press play below and be sure to save this joint.

The first of a few insane collabs with KEY!, Carti takes control of this record and delivers one of his most contagious efforts yet. I love his intimidating flow on this cut and think FatManKey consistenyl brings out the best in his peers.

Another cut with KEY!, the fellow ATLiens drop some flame verses over a melodic hook thanks to the Two-9 member and crank out another heater.

Etheral and Carti have a special bond and you can tell by listening to any of their joint efforts. This is another memorable, laid back banger and should be listened to at the highest of volumes.

Lamb$ better drop some new shit with Carti soon because they always make a spectacular pairing. Peep “Another Day” below and try telling me you disagree.

One of the standouts on here for sure is the official remix to fellow Atlanta rapper Father’s “Fake AF.” Carti crushes his portion of the song and adds to the undeniable dynamic of the Awful Records founder. Listen to this bangin’ remix below.

This is one of the more slept-on tracks on here, but hits hard as fuck nonetheless. Listen to Carti join forces with Guna on “YSL” below.

Trappin’ out my two door! This is the perfect anthem to bump while indulging in your choice of illegal activities. One of the first tracks I ever heard Carti on, and an undeniable classic.

Yung Bans is on the come up, though you may not be familiar with his Carti collab if you’re recently discovered his material. Released a while ago, “4Tspoon” is a track you’ve gotta hear to believe. Check it out below.

As if one of Famous Dex’s most infectious hits could get any better, Playboi Carti hops on the remix to bring his unique swagger and bold presence to the track. Gotta love it.