Dev Hynes (aka Blood Orange) serves viewers a stunning performance of “Dark & Handsome”, a track from his most recent album “Angel’s Pulse”. 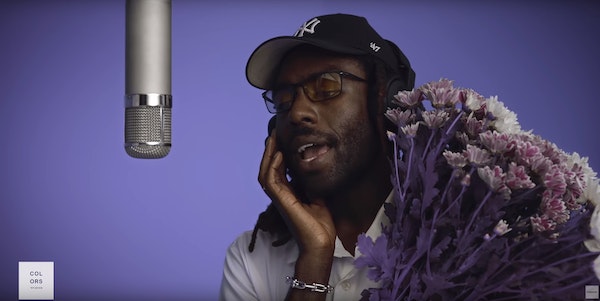 How many of you were also waiting for this moment just like I was? We all are fully aware of what prodigious talent A COLORS SHOW brings to their stage, in every instance. This time around, London born singer-songwriter & producer, Dev Hynes of Blood Orange, takes the stage to perform “Dark & Handsome” with a bouquet of flowers, colorfully assorted to match the dark lavender setting. “Angel’s Pulse” was one of those albums that really stood out to me vocally, this track being one of my personal favorites from the album itself. “Dark & Handsome” featured on his most recent project with Toro Y Moi, although Chaz doesn’t actually appear for his segment of the song. Despite the absence, we still receive an endearing moment from Dev during Toro’s verse, as he waves the bouquet of flowers around.

In my opinion, this prop addition was such a beautiful accessory to his performance, prevailing the innocence and delicacy surrounding his energy & aura. The burning passion in Dev’s body language every time he performs is one that sends chills, making him easily one of my top choices when watching live performances. If you’re familiar with this fact about Dev, then you know exactly what I’m talking about when it comes to that specific feeling he gives. His voice during this performance is unbelievable in a sense, sounding just like the album version & that’s without exaggeration. Thoroughly enjoyable from start to finish, this COLORS SHOW allowed for me to see a deeper, more intimate side of Dev–one that we can appreciate wholeheartedly.