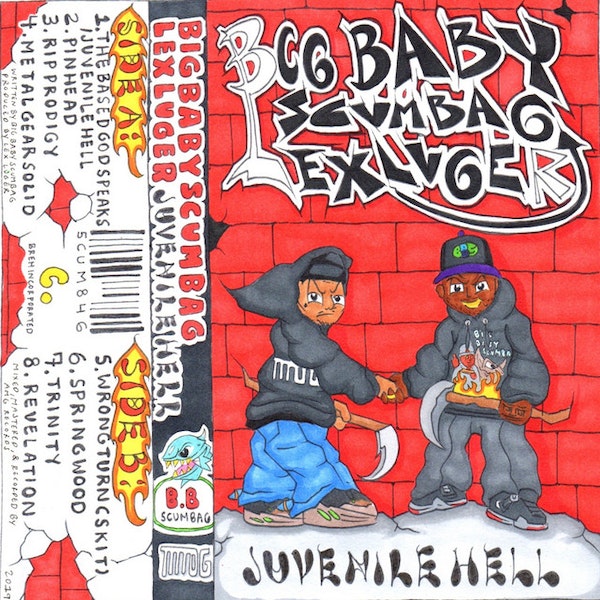 Juvenile Hell kicks off with a Lil B shoutout and is entirely produced by trap legend Lex Luger – it’s brash, it’s twisted, and an inside look at Big Baby Scumbag’s adolescent self. Inspired by 90s horror flicks and his struggles coming into his own, Big Baby Scumbag spews teen angst and niche 90s references over thunderous trap beats, like Heaven’s Gate, WAZZUP and Mobb Deep. Think 2009 Waka Flocka meets Father’s mischievous charm.

Brought up in the bumping Tampa, Florida underground scene, Big Baby Scumbag has been making waves with his larger-than-life personality. His music can be brazen, cartoonish and ravingly fun, turning heads during every play. Standout tracks such as ‘Dale Earnhardt’ (getting praise from Dale Earnhardt Jr himself), ‘Chirpwalk’ and ‘Jelly’ showcase Big Baby’s raw, animated and glaring talent, making him a gem in the rap scene. Big Baby Scumbag is officially Nardwuar’s favorite rap name and he was listed as #5 on Complex’s ‘Ranking the Babies’ feature. He has continued to earn praise from Pigeons & Planes, No Jumper, WorldStar as well as maintain a recurring spot on the Rolling Loud festival circuit.

Virginia native Lex Luger is no stranger to the burgeoning underground scene. Having produced alongside the likes of Waka Flocka Flame, Lil Yachty, Quavo and more, Luger has altered the sound of rap’s mainstream and brought his own minimalist, aggressive style to the forefront.

Rowdy, energetic and refreshing, Juvenile Hell has the momentum to hurtle Big Baby Scumbag to the center of the rap scene.