The highly anticipated collaboration has arrived… 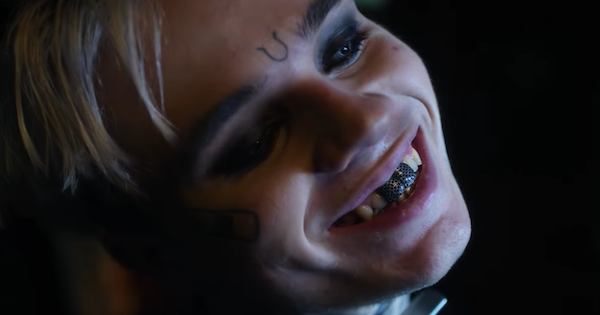 Bexey Swan has released his $uicideBoy$-assisted track “Cuthroat Smile”. Produced by stereoRYZE, the track will surely not disappoint fans who’ve been awaiting its release for months. The London-based rapper has also dropped a demonic pair of visuals to accompany the sensational record.

“Shut the lights off bitch, I don’t wanna see a thing // Cut the sound out baby, I don’t wanna hear shit // Turn my mind off quick, I don’t even wanna think // How did I get here? Take me back, disappear” he spits on the hook. According to Bexey via an interview with XXLMag.com, this part of the song is about “not wanting to feel anything, not wanting to be here, a break from the madness”. This longing for numbness is a common theme in his music, which is understandable when depression is another.

Speaking on the visual half of this release, the rapper is shown haunting an ignorant parent who chastises his daughter for listening to Bexey’s “evil” music. Of course, the father has never even listened to the music himself and pre-maturely judges it due to the unconventional appearance of the emo rapper. Watch the engulfing visuals “Cuthroat Smile” below and add the track to your current Spotify playlist.