News
Oct 7, 2018
Banksy art piece self-destructs after being sold for over 1 million dollars at auction

Banksy has long been one of the most enigmatic artists of any medium in contemporary art. Despite his rise to fame, the artist has preferred anonymity to this point while also expressing a clear displeasure in the selling of his works, which he prefers to be enjoyed by the public, not a private collector. Late last night, the unthinkable happened.

A pristine, framed version of the English artist’s iconic “Girl with a Balloon” painting came up for a bid. The final purchasing price is said to exceed 1.2 million dollars as the proud new owner undoubtedly thought of where they’d display their new piece something incredible happened. The artwork began to shred itself, leaving a jumbled mess hanging below the frame as on-lookers collective jaws hit the floor. In a stunning move, it’d appear that Banksy has sabotaged his own work in an effort to further his point that he believes these works are intended for public consumption. You can view pictures of the artwork after the incident below. 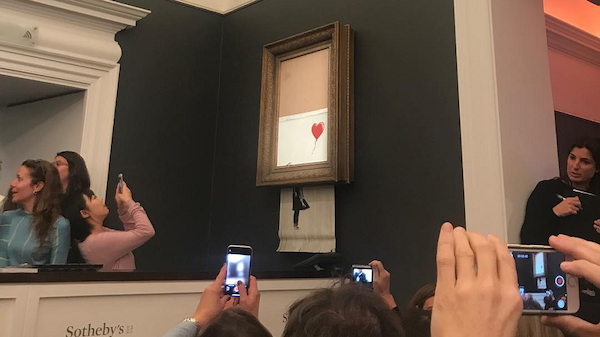 . "The urge to destroy is also a creative urge" – Picasso