As a female in the hip-hop industry you’re quickly categorized into one of a few clearly labeled boxes – “Lesbian,” “Hood,” or “Object of Sexual Desire.” Don’t believe me? Please refer to Missy Elliot, Lil Kim, Foxy Brown, and drumroll

As a female in the hip-hop industry you’re quickly categorized into one of a few clearly labeled boxes – “Lesbian,” “Hood,” or “Object of Sexual Desire.” Don’t believe me? Please refer to Missy Elliot, Lil Kim, Foxy Brown, and drumroll please… Nicki Minaj. As a female MC, your skill set is only second to your demeanor. Your clothing options, Your [overwhelming or underwhelming] sexualized appearance, your raunchy or tough lyrcial content – those become your signifiers.

This is the upward battle young MoBo The Great is facing as an up and coming female MC. The most endearing and attractive trait about the rising Chicago rapper also happens to be her ongoing gripe and perpetual tussle with the male dominated hip-hop culture. Her strong will, her stubborn desire not to compromise her appearance, her moral code, and above all her modesty.

Born Monique Burrell in the suburb of Kankakee, MoBo The Great is no stranger to the struggle of maintaining an original identity in a scene of dreads, drill thumping bass, and lack of lyrical content. The 19 year-old says, “Most of my friends are rappers. The people in my circle love my music and appreciate my image, those outside of my crew enjoy my music but not my image. But this is me. Damned if I do, damned if I don’t, you know?” 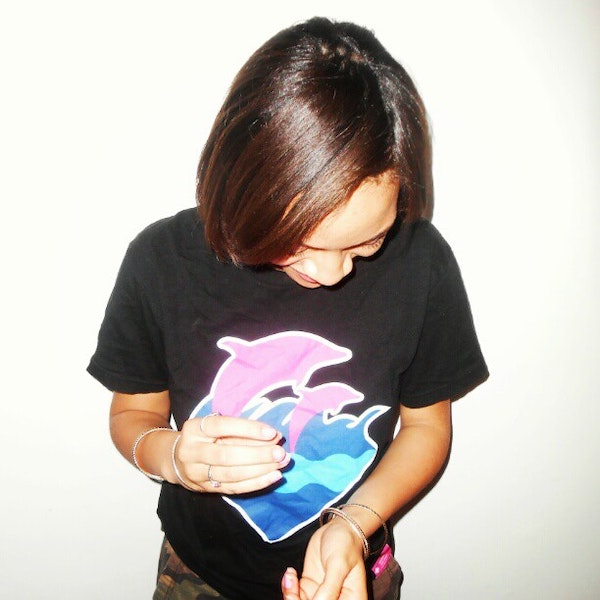 In 2012, MoBo bursted on the scene with her catchy, completely ironic, drill anthem “Trippy Crew” – a track she created as a sort of diss record of Chicago’s contemporary hip-hop scene. Unfortunately, the ironic message missed the mark and the record didn’t blow up as MoBo and her close knit #WealthyNation crew had anticipated. “It got no love from the blogs. Zero. Zip. Nobody was giving me any credit, nobody was fucking with me. Nobody. It was one of the biggest disappointments and it happened so early on.” But rather than get discouraged, MoBo got feisty and said, “Fuck the public, man.”

This past March, MoBo dropped her single, “Fuck The Public” off her forthcoming mixtape of the same title, #FuckThePublic. And it spread like jam. The track, (which borrows a Casey Veggies beat) is her real introduction to the music industry. “I represent myself, I stay true to me and “Fuck The Public” embodies my movement, my sound, and the fact that I am misunderstood.” MoBo has a variant sound. Yeah, I know everybody says that. But in a culture of female MC sameness, every once in awhile you get one that’s unique, one that willingly sets herself apart, one that sets a trend of diversity.  Every once in a blue moon you’ll get a MoBo The Great.

Get To Understand MoBo The Great

Briggie Smalls: Miss MoBo, if you could have dinner with any five individuals, dead or alive, who would you choose?

Briggie Smalls: Yeezus AND Jesus – that’s a holy meal, HA! So one of my favorite scenarios is this: You’re stuck in Costco and the zombie apocalypse randomly begins, what five people do you want there with you?

Briggie Smalls: Hov in both answers? I take it he has one of your top five favorite albums?

MoBo The Great: Oh yeah, BP III. Along with Ye’s 808’s & Heartbreak and Graduation. Common’s BE and I absolutely love The Pharcyde, so Bizarre Ride II The Pharcyde.

Briggie Smalls: Dope picks – I love Ye too. Is your favorite song a Kanye song?

MoBo The Great: You know it – but it’s tie between “I Wonder” and “Gotta Have It” off Watch The Throne.